Yvonne has been photographing and studying birds for 40+ years. She maintains bird and butterfly gardens in her Louisiana backyard habitat.

I received my first camera over forty years ago and I've been interested in wildlife and the outdoors for as long as I can remember. So it was a natural progression to explore the world of digital motion sensor wildlife cameras when they became more widely available.

Digital game cameras allow you to observe and photograph all kinds of animals, both the night creatures and those of the day, without having to sit for long hours in a blind.

Our first "game" camera was manufactured by Moultrie Feeders. These digital cameras were originally designed for finding game and were used primarily by hunters. Soon photographers discovered them and used them in a similar way, except the game that was found was shot with a camera and after the photo shoot, went on their merry way, unharmed.

All of the Moultrie cameras have internal memory and also accept SD memory cards. They run on batteries and the life of the battery can be extended greatly with the Game Spy Power panel (a solar panel and 12 volt battery).

Through the years, we've continually upgraded our Moultrie Game Spy cameras and now we own three: an old M40 GameSpy, an I40 Infrared GameSpy and a newer M45 Game Spy. All of them take good pictures, but each has different features.

Moultrie Feeders' cameras are affordable and the company has a good 1 year warranty on their cameras. They offer free repair up to 1 year from purchase. If the camera cannot be repaired, they will replace the camera with the same or a similar model free of charge and a 1 year warranty comes with the replacement.

The GameSpy I40 is an infrared camera. This means that the flash is invisible to the game. This also means that the photos which are taken at night are black and white.

To us, this is a negative, because we prefer color photographs. We use the I40 in areas where a great deal of natural light is available because low light photographs, even those taken in light shade are also in black and white. If the infrared flash is triggered, the I40 goes into black and white mode.

Day time photographs are in color and so are the day time videos. The picture quality is good and the strip across the bottom showing time, date, temperature, moon phase and camera name is wonderful.

Below are the product features from the manufacturer.

Moultrie Game Spy I-40 Infrared Flash Game Camera
Infrared cameras have an invisible flash. The pictures are in color in strong light and in black and white during low light conditions.
Buy Now

Beavers and Racoons at Night 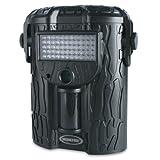 Moultrie Feeders MFH-DGS-M45 Game Spy 45 Digital Game Dlx MTM
The M45 takes color pictures and video day or night. There is an optional remote access that you can subscribe to.
Buy Now

The newer M45 GameSpy camera has a white flash. This means that the flash can be seen when it is activated. Because of this the photos are in color day and night and also the video clips.

The M45 and the other cameras with the white flash are the ones that we prefer because they take high quality color pictures day or night.

This and the other newer cameras also have the option to hook up to the Moultrie game management system through a cell phone connection with Moultrie's servers. You can view and download the photos on your camera from your computer by logging on to the system from anywhere in the world. There is a monthly fee for this option.

These are the M45 camera features as listed by the manufacturer:

I haven't been checking the camera at the river as often as I should.  We recently had two or three days of torrential rainfall which caused the Tchefuncte River to rise and the creeks to back up.  But before that happened there was about a week of sunny, spring-like weather.

This adult Bobcat was taking advantage of the beautiful weather.  I hadn't put out feed for over a week, but since most animals follow the trail along the river, we still get some good shots of both predator and prey.

The flood waters are gradually rising and the beavers can swim right up to where the feeding spot is.  We use 'Golden Nuggets' and cracked corn.  This takes care of a variety of animals and birds.

Rio and I are changing the card in the camera, putting out food and checking out the high water.  It has receded quite a bit in the last day or so.  They predict more rain in a couple of days.  The camera will catch the action as the water rises. 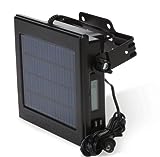 Pair of Young Bobcats by the Tchefuncte River

Game Cameras are very useful in showing time lapse progression like advancing and receding flood waters. The photos below were taken from December 18 to December 22, 2009 when the Tchefuncte River was cresting.

Many animals visited the feeding spot along the river, and as the water rose and fell, different types of animals came and went.

More About Photos of Night Creatures

Do you have (or want) a "Game" Camera? Tell us what you think.