How to Draw A Shark

Shawnte is an elementary school science educator and illustrator who studies various life cycles of animals.

I've been meaning to create many more animal drawing tutorials these days. Today, I am going to show you all how to draw an awesome looking sharp in just a few easy steps. Surprisingly, a shark is pretty straight forward to draw, as there aren't too many complicating parts on a shark to be frank. I tried to make this hub as easy to follow as possible and I hope you guys enjoy this one a lot.

This tutorial is especially great for kids or even adults who are learning how to draw some basic animals. I will have more tutorial hubs headed your way if this describes you. :)

The Origins Of Sharks

Sharks are an incredibly unique, Carboniferous species of fish that inhabit ocean waters around the globe. Their most identifiable characteristics are their razor sharp teeth and humongous pectoral fin at the top of their heads. The earliest known trace of sharks having existed is over 420 million years! The average lifespan of a shark is anywhere between 20 and 30 years.

Are you afraid of sharks? Well, don't worry. There are a lot of species of sea creatures that fear the shark as well!

Before we begin our drawing, allow me to quickly go over a basic list of some supplies you'll be needing at start.

In this first step, we will be focusing entirely on the body of the shark. Notice that I left room for each of the fins. The empty spaces will later be used to draw in certain fins. The shark has a lot of fins on it, be warned!

While we are on the subject of the shark's body, we might as well draw in the face. For now, just an upper and lower mouth will do. Remember, a shark's upper portion of its mouth is a lot bigger than its lower part.

On the top portion, draw the first and second dorsal fin. The first dorsal fin is the larger fin that is leading the smaller one.

The tail fin is the last and largest fin on the shark. Draw a tail fin that looks similar to the one shown in the example on the right.

Lastly, it is time to fill in the finer details of the shark. Draw the gills, eye and nostrils of the shark. If you noticed in this last image, I drew a fine line down the middle of the shark, separating the back from the stomach portion as well.

That's all! Feel free to share this tutorial with any beginner artists you may know! I hope you guys liked this and I hope you will stay tuned for even more interesting tutorials in the future. :)

How to draw more ocean creatures 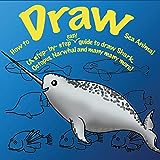 How to Draw Sea Animals. (How to Draw.A Step By Step Guide.)
Buy Now