"Impressionism is a 19th-century art movement that originated with a group of Paris-based artists. Their independent exhibitions brought them to prominence during the 1870s and 1880s, in spite of harsh opposition from the conventional art community in France. The name of the style derives from the title of a Claude Monet work, Impression, soleil levant (Impression, Sunrise), which provoked the critic Louis Leroy to coin the term in a satirical review published in the Parisian newspaper Le Charivari.

Impressionist painting characteristics include relatively small, thin, yet visible brush strokes, open composition, emphasis on accurate depiction of light in its changing qualities (often accentuating the effects of the passage of time), ordinary subject matter, inclusion of movement as a crucial element of human perception and experience, and unusual visual angles. The development of Impressionism in the visual arts was soon followed by analogous styles in other media that became known as impressionist music and impressionist literature." Wikipedia

Most photography is made with the intent of showing a clear and crisp representation of a subject. However there are also other styles that purposely make their subject not crisp, clear and usually out of focus.

Among these techniques is the impressionist style which emphasizes colors, especially soft pastels.

This is done with the idea of conveying a feeling, a general impression or even creating suggestive emotions.

Since these impressionist photographs usually lack much detail they are used to emphasize color over line and are often soft, dream-like, and have a painted feel to them rather than a photographic one.

Since most of these impressionist photographs are out of focus, they have to appear to the viewer that they were made that way on purpose by the photographer.

If you show a slight out of focus image, then the viewer may think that it was a technical mistake rather than an intended representation.

This is difficult and it takes practice. After all, how do you know how much out of focus is too much and how much is too little?

There are several techniques that achieve the effect and they are rather easy to master but again achieving the true representation of the impressionist theme is not.

One technique is to intentionally move the camera as you slowly depress the shutter. Move the camera in the direction of any strong details of lines and continue with the panning until the shutter has completely gone through its evolution.

It helps if you choose a shutter speed that is slow for the light conditions. 1/20 is quite handy and so is the 1 second one.

Zoom blur effect. Zoom in or out of the central point within a scene while the shutter has been depressed. Choose a speed of about 1 to 2 seconds.

This technique is especially good for night shots where there are plenty of lights like street lights or brightly lit buildings. Keep manually zooming the lens as the shutter goes through its motions.

Using a wide aperture while focusing on one main spot in the scene. A wide aperture like f- 1.8 works best. A macro lens or a zoom lens allows for a greater flexibility when using this technique.

For moving subjects like flowers, trees and water, use a long exposure. Depending on the available light one second or two really works best. Set the camera on a tripod and set an automatic or electronic shutter release. While the subject sways in the wind the slow shutter speed will blend the details.

Focus through subjects. This technique is the easiest to get right. Choose subjects that are bunched up together like flowers or grasses. Focus on a single specimen and get the lens close to other subjects that are in front of it, almost touching the lens.

You will have to use manual focusing for this technique as the closeness of the subjects will not allow the auto focus to work properly.

Another technique is to use what is known as water glass. It is a specially made type of glass that allows colors and shadows to be seen but hides details due to its construction. Place it between you and your subject and take the shot.

Most residential bathroom windows and sliding shower glass doors have this type of glass. Keep in mind that for the subject's shape to be somewhat recognizable it has to be very close to the glass itself. 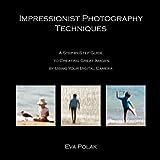 Some of the best subjects for the theme are water scenes and reflections.

Reflections specially work well since the reflected image starts out as almost an impressionist photograph.

Capture reflections on water that is slightly moving for best results.

You can also create you own movement by throwing a small rock and photographing while the ripples are expanding.

Moving water scenes when photographed with a slow shutter speed create a sort of dreamy, misty scene and do well with the theme.

This techniques will allow you to expand your photographic horizons and perhaps help you make some sales. Fine art galleries and many photographic publications do consider these types of shots quite often.

However, nothing beats creativity. Don't take a shot just because. Plan it and examine all angles and perspectives whenever possible. It is a good idea to take several shots of the same subject and post judge the effectiveness later.

Like with any photographic adventure, be your own worst critic and judge your images from a professional standpoint, do not become too attached to images that are not pleasant, have technical flaws or are not anything to talk about.