Learn How To Knit - Knitting Tools

Learning how to knit can be an overwhelming experience, especially when it comes to buying the supplies you need. This handy guide will help you figure out what you need.

When most people think of knitting, they automatically envision someone holding two long needles with a ball of yarn at their side, and a project taking form at their fingertips. The needles in this mental image are straight needles, the most common needle used for knitting.

They come in several different sizes, ranging from extremely small for detailed work to very large, for bulky work. If you look at the ends of these one pointed needle, you’ll see a number or a measurement.

The number system is an easy way to determine which sized needle works with your project. Often, there will be a millimeter measurement as well.

These sizes are important, because they impact how tight your stitches will be. The tiny needles will create a tighter knit, while larger needles will provide a looser knit.

Straight needles are commonly used when knitting scarves, panels and other flat projects.

Another type of commonly used needles is double pointed needles. These are used when making smaller things that need to be knit in a tube formation, like socks, gloves and some toys. They’re sometimes used in conjunction with circular needles when the project needs to be reduced in size, as in the case of hats.

These are usually used four or five at a time, and they can be a little tricky to use at first. It’s easy to drop stitches when you’re trying to work with too big of a project, and it’s a bit difficult juggling more than two needles at first. Practice will make them easier to use.

These needles are usually plastic, though I’ve seen them as metal as well. They’re blunt, but otherwise they look like an over-sized sewing needle. Yarn needles are used to weave in the ends of finished projects, or to add detailing.

If you don’t have a yarn needle, you can also weave the ends in with a crochet hook.

Like double pointed needles, circular needles are used to make things that are needed to be knit in tubes, like hats and some types of sweaters. While they’re a little easier to avoid dropping stitches with, they can be trickier to start working with, because if your stitches get twisted, you’ll need to start over again.

Circular needles are also useful for making larger projects, like blankets and afghans. Provided the cord is long enough, large numbers of stitches are easier to handle, due to less bunching.

Both circular and double pointed needles come in various sizes, just like straight needles do. There’s no good place to put the number on the needles themselves, though, so it’s a good idea to come up with a storage solution or keep a stitch gauge with needle measurements at hand for future projects.

Have you ever seen those twisted looking stitches in scarves, sweaters and blankets? Those are done using the cable stitch. While it’s possible to do it with a double pointed needle, using the specialized cable needle makes it much easier.

You use it by slipping the stitches you’d like to overlap on the final project onto the short end of the needle and let them hang in front or in back as you knit the rest of the stitches in the section. Then, slip the cable needle around and knit the remaining stitches from the long side of the needle.

You can manipulate which way you’d like the cable to twist by letting the needle hang either in front or behind the fabric. I prefer to let it hang in front whenever possible, because I find it easier to knit that way.

Before you start any project off of a pattern, you should do something called checking the gauge. You do this by knitting a swatch of fabric, then measuring how many rows and stitches make up one to four inches of fabric.

You can do this with a ruler or tailor’s tape, but stitch gauges are handy, because you can check both the vertical and horizontal numbers at the same time. Many of them also have keys to measure knitting needle and crochet sizes.

I’m rather fond of that feature, because it makes it easier to keep track of how big my double pointed and circular needles are. That, in turn, makes it simpler to pick what yarn I want to use and which patterns to try.

These are little removable notions that mark a certain spot in a pattern. It can be the point at which you’ll eventually reduce stitches, or where you switch to a new technique.

I’ve seen two types floating around. One is a simple little ring that slides onto the knitting needle, and gets moved as you work. The other actually clips onto the fabric, and could stay in place as your piece gets larger.

Although they’re not one hundred percent necessary for a lot of projects, they do make it easier to keep track of where you need to make whatever changes are called for in the pattern.

Of course, yarn is one of the necessities of knitting, and one of the most fun things to shop for. You can find acrylic, wool, cotton, silk and even cat or dog hair yarn. While those last two options probably won’t show up in most craft stores, yarn does have some specific labeling to watch out for.

It can be tricky to determine which is best for your project, but I’ve found that size 4 usually equals the popular sports weight used in most projects, while anything smaller is good for baby items or detailed work, and anything larger is great for blankets or bulkier projects.

Most yarn will also have suggested sizes for crochet and knitting needles. This is helpful when shopping for a particular project that requires a specific gauge. By aligning the gauge on the yarn to what’s needed, you could save yourself a little frustration down the line. It can also give you an idea of how much yarn you actually need to buy.

You’ll also find care instructions on the label, which you’ll want to save for later care of your item. Some yarns aren’t machine washable, while others are. Ironing is a bad idea for some fibers, while others tolerate it well. It’s a good idea to keep that in mind while shopping, as well.

Two more important pieces of information are the materials the yarn is made out of and how much yardage is in the skein. If you have sensitive skin, or allergies to wool, pay close attention to what’s in the yarn to save yourself some pain later on. The yardage will help you determine how much to buy. It’s always safer to err on the side of buying too much than too little, because it can be hard matching colors if the one you started with was discontinued for some reason.

Lastly, you may see a lot number listed. This is short for “dye lot”, which indicates which batch your yarn was dyed in. It’s important, because colors can differ subtly from lot to lot. Even if it’s the same brand, color and weight, different lots can be different enough to result in a project made of noticeably different shades.

Collecting supplies for your new hobby may seem complicated at first, but once you get an idea of what everything is used for, you won’t be able to leave the craft store without picking something up for a future knitting project. 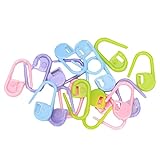 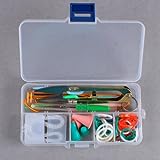