Mandala Art - what is it and its meaning?

Mandala and its style originated many ages ago. Mandala itself comes from manda which means "essence" and la which means "container". In effect this means essence contained or a container of essence. In regards to Indio-European Religion and its associated literature, mandala means chapter. This would be a collection of verse hymns or "

mantras" chanted in ceremonies. The belief is that the universe originated from these hymns and that they hold the genetic patterns of all things as well as beings.

In esoteric Buddhism, Buddha is revered above all and his revered being is symbolized in the Mandala. Both his body and mind through many different representations. However an image of deity is not necessary since Buddha is present in all things he may be represented by a jewel or tree, a wheel or many other symbolic representations of his manifestation in the world.

In our modern age Mandala is a style that is used widely and the interpretation has taken on exponential variations. Not only is it used in Buddhist and Tibetan ceremonies, it is adopted in many cultures for art therapy purposes. Additionally, in more modern practices such as yoga tantra, visualization and utilization of mandala to assist in meditation is widely practiced.

In example, at the Namgyal monastery, a monk must study for three years. He must succeed in memorization as well as technical artistic style and form. He must learn all the various symbols and their meanings as well as how to accurately represent them within the mandala, before he will be allowed to participate in the mandala's construction.

Since all mandala are based in scriptural text, exacting detail is required at all times during training. At the end of every training session any artistic or spiritual meaning gleaned from the session is dedicated to the others so that all may spiritually profit as a whole. Additionally, early mandala paintings are sand painted and returned to water or stream to continue the "circle of life".

In the beginning four monks sit around the outer edge of the mandala base. Each is assigned a quadrant to work with. The four monks work individually on their quadrant while constructing the "directions" or square area, however, when constructing the concentric lines and shapes they work in tandem. They move as one completing one entire section before continuing on to the next section. While it appears to be a work of art, it is also a ritual in which all the others participate. The others will be situated around the outsides of the mandala behind the monks creating the mandala in concentric circles themselves.

The final form of any mandala is meditated upon extensively prior to its manifestation. The monks' intuition comes into play in the form of worship concepts realized in concrete form through art. The mandala contains Buddha's instructions for attaining enlightenment so each monk's work must be perfect and their motivation pure and unblemished to achieve maximum benefit for all the viewers as well.

Mandala in its most basic form is concentric circles surrounding the four walls of the palace within containing symbols of fire or lightning bolts or even diamond scepters. In the central area a deity is generally depicted.

The reason traditional mandala appear similar is that color has meaning as well.

The basic conceptual manifestation of Mandala is not exclusive to Buddhist precepts. The physical form of mandala is depicted in other circular manifestations as in the "Medicine Wheel" or the "Dream Catcher" as well as the Taoist "Yin & Yang".

If you consider symmetry as the most basic concept that exists, you can find examples of symmetry in all facets of existence from math to physics to religion and even to architecture and pottery. The very essence of mandala is to embrace the spirituality in all things as all things lead to deity and enlightenment through acceptance and understanding of essential spiritual concepts. 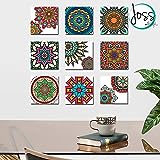