All About Singer Sewing Machines, Featherweights, and Where to Get Singer Manuals 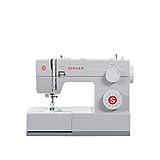 Singer sewing machines are one of the most well-known sewing brands in the U.S. The company was started by Isaac Merrit Singer in 1851, along with partner Edward Clark, and the first naming of the company was from the owner - "I M Singer & Co." which was subsequently changed in 1853 to the familiar "Singer Manufacturing Company." The name stayed the same until 1963 when the company changed its name to "The Singer Company."

The Singer sewing machine company now owns the White brand of sewing machines, and when looking at the singer manual page from their company website (see link under "Singer Sewing Machine Manuals & Product Information"), enter a 'W' in front of the model number. Many different White sewing machine manual can be found on the Singer website.

The Singer Sewing Company now makes both very basic and inexpensive machines all the way to high-end sewing & embroidery machines. Singer also makes sergers and irons that were made to go along with sewing, inside sewing rooms. Their website lists over 40 different sewing machines and embroidery machines to read about along with their models of sergers.

How to Insert a Bobbin in a Singer Sewing Machine

How to Thread a Singer Sewing Machine