This is what Robert has said about painting.

“Painting, for me, has never been a hobby. It is not relaxing - writers and athletes would say the same. Since I was twelve, I have always painted unless I am interrupted. It is a labour, but it is what I do . . . a labour of love let us say”.

Who is Robert Bateman

Robert Bateman Canadian artist/naturalist painter from Toronto, Ontario, Canada, born in 1930 specializes in wildlife. This man was interested in nature from the time he was a little boy.

Never really thinking about making a living at anything to do with art he attended the University of Toronto graduating with degree in Geography then went onto Ontario College of Education. He was always painting but ended up being a geography/art teacher in several high schools from 1955 - 1975. He did take a break from teaching for a year in 1957 to go on an around the world trip to visit England, Africa, India, Burma, and Australia as well as other countries.

In 1969 Robert put on an exhibit of his paintings in Toronto and he started painting full time in 1976. His paintings were first recognized 1970’s and 1980’s and in 1980 Bateman was named “Artist of the Year” in the American Artist magazine. All of his accomplishments and One Man Exhibits can been seen at Robert Bateman .

At the Royal Roads University in British Columbia there is a Robert Bateman Centre for art where you get insights into the life of Robert Bateman. This center has a collection of his work and educates and inspires people of all ages. In June of 2010, at the age of 79, Robert received Doctor of Laws, honoris causa from Royal Roads University for which he was very honored.

I have always loved the beauty that this man brings to canvas with his magnificent paintings. I do own four prints of his that I cherish.

Photos From Portraits Of Nature 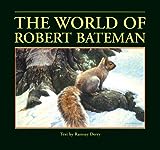