When thinking about arty cities, you may be excused for not immediately thinking about Glasgow. I wouldn't have done so either...that is, until I recently visited the city for the first time and was astounded by all the art I saw almost everywhere I looked.

Locating Glasgow on the Map 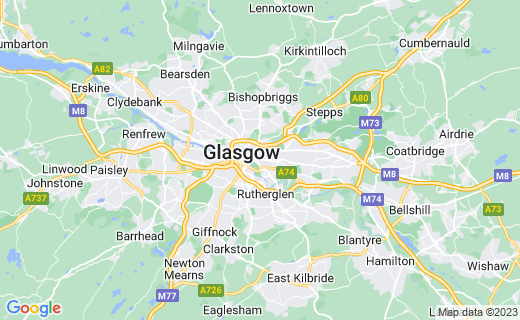 Glasgow has a popular street art culture that has been allowed to ferment naturally and has been welcomed by cultural and educational institutions such as the galleries and universities and has been supported by Glasgow's local authority. Glasgow City Council even commissioned a number of local street artists to produce a series in advance of the Commonwealth Games which were hosted in the city in 2014.

There is even a publicised walking tour that visitors can do themselves that takes in all many of the key pieces of street art. Many of these best street art examples are located along George Street, heading in an eastward direction from George Square. Several of the examples highlighted in this post adorn some of University of Strathclyde buildings along this stretch of George Street.

The artworks in the images below are part of the Strathclyde University's Wonderwall. Covering over 1000 square meters and climbing over several stories, and a variety of different works, the Wonderwall is the largest street work mural in the UK. The University commissioned the works as part of their 50th anniversary celebrations and also to tie in with the 2014 hosting of the Commonwealth Games in the city.

The High Street Mural by Smug

One of my favourites is the image of a man and a bird that covers the gable end of a row of tenement houses along High Street. The piece is known simply as 'The High Street Mural' and was painted by an Australian artist named 'Smug'.

There are different viewpoints as to what constitutes street art. For me, street art is art which belongs in a public setting and which does not alienate people but has an impact on people as they pass by and see it. I believe that artists should not do this to other people's property without permission and should not generally do this on public sector buildings or land without permission as it will almost certainly be removed and that is a cost to the public purse.

Street art is that which has artistic integrity and merit and through which some kind of meaning and message can be derived. I see lots of 'tagging' and meaningless slang graffiti-ed on walls and buildings but I rarely see any of this as street art.

One my favourite pieces of street art in Glasgow is this picture of a classic black cab being carried by balloons. It is one of several pieces drawn by a Glasgow street artist who goes by the name of Rogue One - who also painted the Hip Hop Marionettes (first picture).

The Mitchell Street Glasgow Taxi pays respect to the Glasgow cabbies who, once a year, volunteer their time to drive children with special educational needs to the seaside for the day.

The Girl With the Magnifying Glass

The Girl With the Magnifying Glass is another piece by the Glasgow-based Australian artist, Smug - real name Sam Bates. This was completed in 2012 and covers the whole gable end of a 4-storey building. It works especially well when there is a vehicle parked between the girl's fingers!

If you visit Glasgow and you want to check out some of the city's Street Art then there are several ways in which you can go about doing this yourself.

One option is to download the City Centre Mural Trail produced by the Council's City Centre Regeneration Team. They also have a short video that you can watch on their website that offers some highlights and where to find them.

There's also the option of downloading and app (there's an app for everything these days isn't there?). The Glasgow Mural Trail App is available on the Google Play Store. The App shows you where to find the artworks and offers commentary to shed light on the stories behind the murals and give some more information on Glasgow life.

Are you a fan of Street Art?