The Carnac Stones and the Morbihan Region of Southern Brittany

I have lived and worked in Brittany France for the past 11 years and love all the wonderful tourist attractions in the area.

Carnac is a seaside town located beside the Gulf du Morbihan within the Morbihan department of Brittany in North-western France.

It is a very popular tourist spot as it has 5 wonderful beaches to enjoy which include the Grand Plage, Beaumer, and the Plage Men Du.

A recent survey to find the top twenty beaches in France put Carnac's Grand Plage within the group. The beach is very safe for children with calm seas, a sandy beach, rock pools to explore and lifeguards on hand. Like most busy public beaches in France, dogs are not permitted on the beach.

Just of the Grand Plage are many restaurants to enjoy lunch or dinner but save dessert for the local Ice cream parlour with 165 flavours to enjoy. They even offer a sampler plate where you can try a dozen flavours.

The town is located in between the wonderful harbour of La Trinity sur le Mer and the Quiberon peninsula.

Carnac is full of history no more so than the world famous Carnac stones and a great way to see the stones, town and coastline is to take a road tourist train around the area.

Carnac is the site of the largest collection of Neolithic stones arranged in alignment in the world, with some 3000 plus stones placed on site between 2000 BC and as far back as 4500 BC.

It is thought that the majority of the work was carried out around circa 3300 BC.

The stones range in size from 0.6 meters in height up to the 'Géant du Manio' a stone standing at 6.5 meters.

No one knows exactly why the stones were placed there, local legend is that a Roman legion was turned to stone by the sorcerer Merlin and a similar Christian legend is that they were pagan soldiers in pursuit of Pope Cornelius who again turned them to stone.

It has also been suggested that successive generations visited the site and erected stones in honour of their ancestors.

Other explanations of the alignments are that there is a connection between the summer solstices and sunsets or that of astronomical observations.

Apart from the stones being laid in alignment there are several burial tombs ( dolmens) still standing, stone chambers that were covered in soil that are now exposed after excavation, no human remains were ever discovered because the soil around Carnac is very acidic and it is believed the acidity would be the reason no remains were ever found.

During the summer months, observation platforms are open for visitors to view the stones which are spread over several locations but outside of those times it is possible to walk around the stones. There is also an information centre beside the alignments.

Whatever the reason for these standing stones they are amazing to see and are Brittany's answer to Stonehenge and actually predate Englands more famous stones.

Where to find Carnac 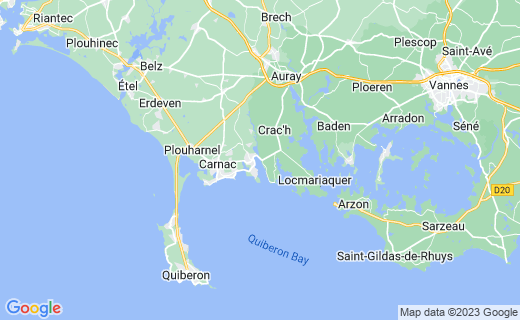 The Morbihan region of Southern Brittany

The Morbihan region was one of the original 83 departments of France established during the French revolution on March 4th, 1790.

It is named Morbihan as it derives from the Bretton word for (the small sea) which is the key feature of this coastline having an enclosed sea.

There are some 30 plus Islands within the sea, most privately owned by the rich and famous.

Vannes is the main city of the Morbihan dating back over 2000 years and is located at the mouth of two rivers. It has been an important hub for trade and the centre of much conflict over the ages dating back to 56 BC when the Veneti a seafaring Celtic people were defeated by Julius Caesar's fleet.

Another notable place to visit is the Quiberon peninsula a spur of land some 12 km long jutting out into the open sea, at one point it is only 200 meters wide. On the shores facing the Morbihan coastline, the sea is calm and tranquil, whereas on the other side of the peninsula it is known as the savage coast with the next landfall being America.

As an area, seafood is of plenty within the Morbihan and all along the coastline is an abundance of great restaurants, some of which have specially made sea pools to keep the shellfish alive and fresh for the table.

With Oysters being farmed all along the coast you can sample these delicacies throughout the year.

A little fun at the Carnac Stones