SJ Peploe is a very popular Scottish Colourist painter who worked in the late 19th century and early 20th century. He is most well known for his still life paintings - influenced by both Manet and Cezanne and his landscapes of the Scottish islands

In 2012-13, the National Gallery of Art in Scotland is holding a major retrospective exhibition of Peploe's paintings

This site provides a compendium of links to sites with information about the artist and where you can see his paintings online and in exhibitions, art museums and galleriesIt also lists books about Peploe.

One new book and a major revision of an existing book were published in 2012 to mark the major retrospective exhibition of his work in Edinburgh.

This book was produced for the major retrospective exhibition of the paintings of S.J. Peploe at the Scottish National Gallery of Modern Art, Edinburgh in 2013.

It's an indispensable guide to the work of this very popular Scottish painter and member of the Scottish Colourists.

Samuel John Peploe (known as SJ Peploe) was a Post-Impressionist Painter who was a member of the group of Scottish painters known as the Scottish Colourists.

The influence of both Cezanne and Manet is obvious in his paintings of landscapes and still life.

Member of: The Royal Scottish Academy and The Scottish Colourists

Exhibited his first work in 1897 and thereafter regularly at the Royal Scottish Academy, and the Royal Glasgow Institute.

1903: first solo exhibition at The Scottish Gallery - 20 works were sold

Travelled to paint in:

Images: "Still Life - Apples and a Jar" by Samuel Peploe, via Wikimedia Commons

"Although his work never became abstract, it was characterised by tight composition, strong colour and assured handling."

A major exhibition was held at the Scottish National Gallery of Modern Art (3rd November 2012 - 23rd June 2013)The exhibition follows a chronological timelines of his work. It is devoted to the artist in his home town of Edinburgh, and throws fascinating new light on Peploe's life, on the influence of France on his work, and on his posthumous reputation.

This is the original edition of this book by Guy Peploe

Paintings by SJ Peploe at Auction

websites provide access to images of the paintings by SJ Peploe.

I have a copy of this book - and it took me a very long time to find a copy!This is one of the principal books about the Scottish Colourists - Cadell, Fergusson, Hunter and Peploe

About The Scottish Colourists 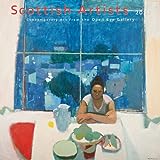