To me there is nothing better than unique and unusual wallpapers which are inspirational and just cool to look at. That's the case with this gallery of cowboy wallpapers that include everything from action-packed calf roping to a fantasy scene of a space cowboy which looks fantastic.

Every one of the digital art included in this article look amazing, and would be a great image to include on your computer or other screen.

There is something mythical and magical concerning the cowboy because he has been disappearing from the mind of the public, as has the lifestyle associated with them. That makes for great opportunities to embellish him while also creating interesting art that places in in scenarios outside of what we usually think of the cowboy.

Together this makes for great art and cowboy wallpapers, as they become a must-have for those looking for unique images to place on their computers.

So if you're looking for some fascinating digital art, you don't have to go any further than this gallery of wallpapers depicting traditional cowboy scenes and cowboy scenes that will surprise you. 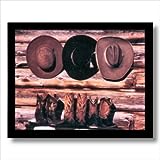 It doesn't get much better than this terrific cowboy fantasy wallpaper of him appearing to walk on the clouds toward the moon.

Adding to the mystical image is the way the horses legs seem to be made of mist as it walks through the matter rather than over it. That's an amazing scene to me.

This either speaks to a horse and a cowboy on their last ride together, or a unique cowboy that is outside this world and its natural laws. Either way it's a fantastic wallpaper that would look amazing on any computer or smaller screen.

This may not be a fantasy cowboy, but it's a fantasy that many little boys have of growing up of being a cowboy with the ability to lasso whatever he is aiming at.

It's a terrific scenario with the horse and cowboy working together as one as they kick up dust as they gallop along together.

Even though it obscures what's going on, it adds to the photo because it includes and air of mystery which makes it even more compelling.

Here there is a familiar image for those that have watched the Cowboys and Aliens movie. It has the very cool high tech device on his arm which helped him battle the otherworldly enemies.

Even with that interesting look, it's not the technology that makes this a great wallpaper but the way he is walking with his back to us with that confident swagger that says this isn't someone that should be messed with.

Including the dark color around him only adds to the persona and power of the image and man. Very cool!

Now we're back to a more traditional cowboy scene, one of two cowboys working together to rope a calf.

It capture the moment nicely where the one man lands his rope exactly where he wants it while the second cowboy readies himself to throw the second rope around the calf in order to rein it in.

Action scenes like this are amazing for wallpapers, as they provide a sense of excitement and movement at a time when we may be tired from watching our computers.

This one is simply cool because of the subject matter and the terrific way the cowboys and horses look at they work together to reach their objective.

It's fantastic to see the way this artist created a space cowboy wallpaper which in spite of the environment the cowboy is in, still retains the essence of who and what he is in the midst of an alien world. That's not easy to do artistically, and it looks striking to say the least.

There is so much detail in this space cowboy art that it's almost impossible to know where to begin in describing it.

Although all the alien spacecraft and objects look great, it's the calm cowboy strumming his guitar in the midst of the dangerous world that makes this so enjoyable to look at. What's not to like about him sitting on that giant skull with his rifle leaning against it?

Even with all the destruction happening around him, he isn't perturbed one bit as he looks upon with confidence that whatever comes his way he'll deal with it.

These types of scenes are extremely inspirational, and great to look at when facing difficult challenges.

When viewing this disparate group of cowboy wallpapers, you can see that there is many ways to interpret the cowboy, and that's definitely the case here with the fantasy wallpapers as well as traditional cowboy digital art.

Both of the styles look fantastic, and either one would be encouraging and inspirational at times when you need a boost from difficult times.

They all exude quiet confidence which is needed to be embraced when tackling projects or going through the difficulties of life.