The world of visual art has developed a large divide from its previous self since the inception of photography.  Since realism was no longer a concern as painters were replaced by cameras for portraits, artists found themselves free to explore all sort of new horizons in visual art.  Schools of thought such as impressionism have directly developed from this technological development.  As art moved in different directions, non-representational art, a type familiar to Eastern cultures, became an interest for Western artists more and more.  These non-representational paintings have often been misunderstood and underappreciated by the majority of westerners who are used to representational art.  This presents the need for an explanation of non-representational, minimalist art that the average art viewer can understand.  To facilitate such an explanation, this article will explore a painting by Piet Mondrian.

In “Blue, White, and Yellow” (See Fig. 1), a minimalist oil painting that uses horizontal and vertical black lines to create simple geometric shapes of the colors mentioned in the title, Piet Mondrian uses subtle and sometimes complex techniques to create an aesthetically appealing and balanced non-representational piece. Painted in 1932 in France, towards the end of the Dutch artist’s life, the piece has continued to be admired along with other later works of Mondrian’s that explore harmony and equilibrium in a completely non-representational and minimal form. All of these paintings had similar titles. For example, “Composition in Red, Yellow and Blue” and “Composition in White, Black and Red” are among some of his most famous pieces from this period. Both these pieces are similar and simple variations on the same minimalist theme presented in “Blue, White and Yellow,” as one might infer from their similar and simple titles. At the time of this writing, the painting resides in the Denver Art Museum (DAM) in Denver, Colorado.

To look specifically at “Blue, White and Yellow”, it is important to understand the context for this work of Mondrian’s other works from the same era. Even a cursory examination reveals connections between these works. From their consistency and simplicity, we can safely assume that Mondrian truly understood the principals of balance and equilibrium his work presented. This mastery warrants a critical examination of the principals of weight and balance in the work. Therefore, the question that must be asked and answered: is “Blue, White and Yellow” harmonious within itself, and if so, how does Mondrian achieve this harmony with so few elements?

The work is divided into several white squares, one large blue square in the upper right corner, and one small, yellow square in the bottom left corner. The remaining space of the painting is filled with geometric shapes of various sizes. His color scheme is one of primary colors, which again suggests the methodical nature of his minimalistic art. This methodical nature is also suggested by his use of pure hue, that is, no dark or light has been added to them. They exist, as everything within this work does, in their purest form. The small, bright yellow square, because of its brighter color and smaller size, works to balance the larger, darker blue square. The weight of the two objects is equal due to their positioning opposite one another and the contrast of size and color. Mondrian uses the relationship and positioning of the blue and yellow squares to create two halves of the piece that can be divided by an imaginary diagonal line from the far tip of the yellow square to the far tip of the blue one. But Mondrian, aware that a mirror image would not work in this piece, kept the halves from being identical by varying the size of the rectangles. This is important because it makes the entire painting appear more natural than a more strictly ordered representation of shapes normally would. The geometric shapes, far from being rigidly placed, do not necessarily follow any specific order, which maintains an abstract quality that subtly adds to the internal harmony of the piece without forcing the viewer’s attention to it. 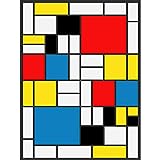 Other Examples of the Golden Ratio 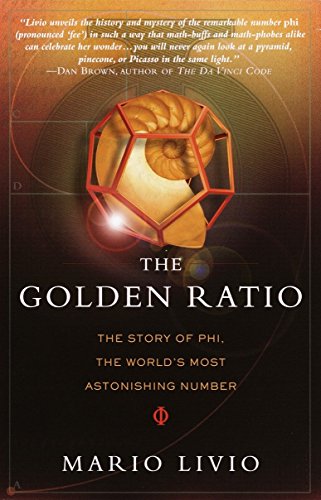 The Golden Ratio: The Story of PHI, the World's Most Astonishing Number
Buy Now

Furthermore, the piece makes use of the golden ratio1(See Fig. 2), which shows Mondrian’s subtle decisions are not random at all, despite their organic realization. The golden ratio, to explain it, has been expressed as the most harmonious relationship between divisions of a whole. This ratio can be found in music, math, architecture, art and even literature. Simply put, the golden ratio is defined such that when you divide a whole into two parts, the ratio of the whole to the larger part is equal of the ratio of the larger part of the whole to the smaller part. The fact is, not only did Mondrian accomplish what we have already discussed, but he was able to incorporate several different golden ratios in his work as well. This can easily be observed by comparing the size of the blue square with a larger section of blue and white, or comparing it in relation to the entire piece. What this does is create layers of balance and harmony for the eye to explore even though there are only a handful of simple shapes and colors within this painting, which is no small feat. Handel, an Eighteenth century German composer, used a very similar technique in his Hallelujah Chorus. In both pieces, the golden ratio serves to underline the already prevalent themes of harmony and beauty, enriching what the artists were already working to accomplish.

It sounds ironic to say there could be a lot more that could be written about such a simplistically appearing piece; it is probably one of the most simplistic pieces in the Denver Art Museum, but it is true. Upon originally encountering the piece, I was surprised that such a seemingly simplistic work could be considered art, yet at the same time, I was intrigued by it. This curiosity and intrigue led to asking questions about the work, which led to the discovery of the depths within the piece. The more questions I asked of it, the more I found its sense of balance and harmony to reveal masterly realization without following obvious modes. This is a very rewarding piece no matter how you look at it. One need not ask any questions to enjoy it, though the piece still rewards the viewer who likes such questions. Thus Mondrian’s piece is a testament to the artistic belief that less can be more, and that the minimal is as rewarding as complex.

1. For an in depth mathematical discussion explaining the origins of Fig.2, follow this link: http://jwilson.coe.uga.edu/emt669/student.folders/frietag.mark/homepage/goldenratio/goldenratio.html.  The discussion is fascinating, yet difficult to follow without a firm base in mathematical studies. 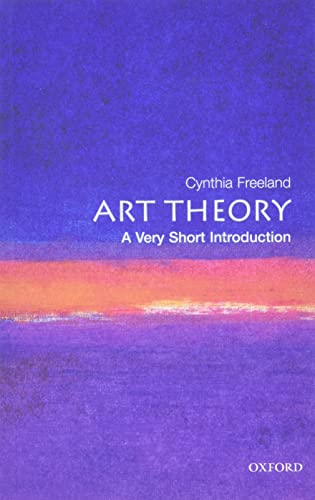 Links to other hubs by Cdub77