Taking a good photo worthy of hanging up on a wall that has motion in it can be a lot harder than you think, but every once in a while - success!

This lens is going to focus on one of my most successful attempts at photo motion photography. I'm going to go over the story of how I came to take it as well as the methods used. My hope is that you will come away with a better understanding on how to capture motion (taking blurry pictures) that you can be proud of.

It's a good feeling when you take a picture (even a spooky one like this) that you're proud to have framed and put on the wall. The good news is that anyone can do it; it may just take a little work.

Photo used in this lens by Mark Morrow / YellowHammer.

The Story Of My Motion Night Photo

The house that is the focal point of the picture was one that I passed on a regular basis each morning on my way to school. One morning I had to get up particularly early to do a project and passed it while still dark. The property always caught my attention, but this was the first time seeing it at night. The owners kept it well lit with outdoor lighting, which made it stick out since there was no other light sources even close to it. It looked magnificent.

At first I tried the usual method of taking pics of it on a tripod from the road and while they turned out nice, they didn't have the energy I wanted. I wracked my brain trying to figure out other ways to get a more unique shot of the house, but it wasn't until a large truck passed by that the idea came to me - take it from inside my vehicle. Now that the hard part was over, all I had to worry about was the practical aspects of taking pictures at night.

The hardest part about taking the picture was finding the right speed in which to drive by the house (and from which direction to take it from). We drove by the house 10 different times at speeds ranging from 15 mph - 50 mph. Although I thought I had a good shot by looking at the preview, I wouldn't know for sure until I opened them up on my computer. This version was taken at 35 mph.

The only thing I did to the image in Photoshop was to adjust the levels to make the darks a little darker and sharpen the image. As you see from below, I also made a black and white version. That's it.

You might think the streaks of lights were added by me, but you'd be wrong. They are from other trucks and vehicles that passed in front of my camera while taking the shot. The squiggly line in the middle was created by my purposely jiggling the camera a little bit around the 5 second mark (street lights).

Which version of the picture do you like best?

Think you might want an art print of the photo used in this lens? Check out the link below.

Photography Tips On How To Get Motion In Your Photos - From inside a car; a moving car - at night.

The Tripod That Saved This Shot

I first tried using a traditional tripod to take this shot, but found it too big and constantly in my way. I borrowed one of these from a friend of mine and found it to be the perfect solution. It's basically a short tripod with flexible legs that can wrap around stuff. I bought one for myself a short time after using his. 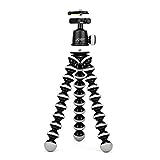 JOBY GorillaPod SLR Zoom. Flexible Tripod with Ballhead Bundle for DSLR and Mirrorless Cameras Up To 3kg. (6.6lbs).
This version is for those who shoot with the heavier DSLR's and zoom lenses (up to 6 lbs). A very good, well-built piece of equipment that most photographers will find a use for. Highly recommended. Oh, and by the way, there are more versions of the GorillaPod that can handle even more weight, if you need them.
Buy Now

Any thoughts about capturing motion in photos, blurry pictures or the lens in general?