A phobia is when we have an often irrational, fear of something. As such, is it possible to have an Art phobia? Well, there are masterpieces in the art world that have an intensity and evocative strength which hit my unconscious and make me feel scared. You know the sensation, your skin begins to crawl and the image you're looking at makes you feel uncomfortable, yet you can't look away, as much as you want to.

I'm not referring to horror pictures, gory magazine covers or images crated by Photoshop, but paintings by famous artists during different art periods.

In this hub I want to show you some of these paintings by famous artists; I hope they are not too frightening for you!

The Nightmare is Fuseli's best known work and there have been many interpretations. The form of the woman's nightmare is shown by a horse (mare => nightmare) and an incubus that for the ancient folklore lies upon sleepers, especially women, in order to have intercourse with them.

Find out more about Fuseli's 'The Nightmare'.

Because of the popularity of the work, Fuseli painted a number of versions, including this variation c. 1790-91.

What's So Scary About Fuseli's 'The Nightmare'?

The main thing is probably the vulnerability of the woman. When we sleep, we are unaware of the world around us, and in both images the woman seems particularly prone and vulnerable. Then we take into account the ghastly being that sits on her chest and the presence of the looming ghostly white-eyed horse and there is a sinister element to be found here.

Will You Be Having Nightmares?

What do you think of 'The Nightmare'? Does it frighten you?

Silence is another painting by Henry Fuseli and although the subject is not at all prone like the women in the above paintings, there is still something very vulnerable about her. In fact she seems to be in a worse condition than the oblivious sleeper, because the subject of Silence seems to be defeated. What has caused the state of this being? Something about the set of her shoulders and the way her palms rest in her lap seems to be particularly disturbing.

How does 'Silence' make you feel? Are you unnerved or wondering what all the fuss is about?

Ellen Terry was considered the top Shakespearean actress of her day, and you can find out about visiting former residence and read more about her here.

John Singer Sargent immortalised Ellen Terry as Lady Macbeth in this painting. I remember the first time I saw this hanging in the Tate Britian. Firstly, the actual painting is quite large and it looms down over you. Add to that the position of the subject and the expression on her face and you may start to understand why it gives me the chills. I can't look at this one for too long.

Did Lady Macbeth give you a fright or were you unaffected?

Millais's Ophelia is another painting I was lucky enough to see in the flesh as it were at the Tate Britain. The colourful flowering shrubbery and background seem at great odds with the poor dead girl lying drowned in this painting. Even before I knew she was the doomed Ophelia from Hamlet I was well aware that some tragedy had befallen the subject of this painting. The contrast between her state and the surrounding natural beauty is intensely creepy.

How did the loss of this fair maiden affect you? Were you frightened?

I guess I really don't have to explain this one as much as the others. Medusa, the infamous Gorgon, is well known for her deathly stare that can literally turn a man to stone. I think this painting by Caravaggio captures that barbaric and deadly aspect of her so perfectly and it is even more gruesome for the serpents and gushing blood from her decapitation.

Did This Gorgon Work Her Charm on You?

Did 'Medusa' turn you to stone? Scary or not...vote now. 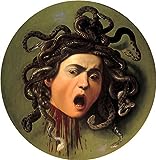 What Are Your Thoughts On Art Phobia? How Did These Paintings Make You Feel? Or Tell Us About Other Creepy Paintings You Have Encountered: