All About Women Artists

Find out about notable Female Painters, Printmakers and Sculptors

This site is about really great Women Artists in the past and present. It links to sites which provide a wealth of information and images about notable women artists.

These are artists whose work has attracted notable comments and/or whose artwork is very popular or attracts people from miles around. Plus the ones which have passed the art history test and are still well regarded despite having lived a long time ago.

The list is by no means complete and this site - and the linked sites (which are to Wikipedia unless otherwise stated) - will be updated periodically.

I'm constantly amazed by women artists and the stories of how they became artists and what they did after they'd made that leap of faith.

Some like Elizabeth Blackwell have the most unusual stories behind what drove them to do what they did. Others like Margaret Mee and Maria Sibylla Merian travelled thousands of miles to paint what interested them. While painters like Mary Cassatt became members of the Impressionists - one of the most influential art movements we've ever seen.

I've only begun to scratch the surface - however I will continue to develop websites for artists I'm interested in - and ones who have good stories!

Great women artists are organised by:

Women artists in the United Kingdom

These are all women artists who I have wanted to find out more about. These sites are a compendium of my bookmarks of sites which provide information and images about these artists

This is a selective list of important female painters working in the twentieth century - from the Bloomsbury set to the Young British Artists of the 1990s, from illustrators to fine artists

This book provides biographies of the most significant women artists in the history of art in Britain.

The aim of this book by Dr Sara Grey is to move women from the margins of art history and towards a better appreciation of the contribution they made in the past. It is regarded as a key stepping stone towards more research in this area.

Tracy Emin was part of the BritArt movement, has represented Britain at the Venice Biennale and is now Professor of Drawing at the Royal Academy of Arts

Women Artists: The National Museum of Women in the Arts

The Guerrilla Girls' Bedside Companion to the History of Western Art

The Guerrilla Girls - whose aim is to fight against discrimination - certainly bring a different perspective to the history of western art!

It's also a very popular book on this topic - Rated an average of 4.5 out of 5 stars (23 customer reviews)

The definitive work on the subject, mapping a complete history of women artists from the Middle Ages and the Renaissance to today

50 Women Artists You Should Know - How many do you know?

This book provides a selective survey of fifty influential women artists from the Renaissance to the Post-Modern era. It's a good place to start if you want a book which tells you more about women artists

This book enables children to learn about women artists.

They include female artists such as

BOOK: Women Artists in History: From Antiquity to the Present

Europe - Italian Women Artists of the 17th century (The Baroque)

Anne Vallayer-Coster: Painter to the Court of Marie-Antoinette

Rated 5.0 out of 5 stars See all reviews (3 customer reviews)

Published in association with the first comprehensive exhibition of Vallayer- Coster's paintings. Organized and published by the Dallas Museum of Art.

Exhibitions were held at:

A number of great women artists of the 19th century are associated with Impressionism.

all links are to Wikipedia, the free encyclopedia

Other Resources About Women in Art History

Resources about Women in Art History

A selection of dictionaries about women artists

Books: National Museum of Women in the Arts

Note that this is arts and not just art

Women Artists: Works from the National Museum of Women in the Arts
Buy Now

A Museum of Their Own: National Museum of Women in the Arts
Buy Now 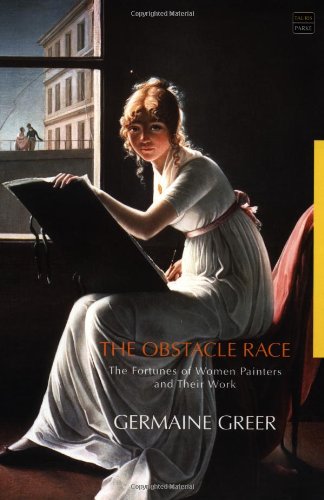 The Obstacle Race: The Fortunes of Women Painters and Their Work
Germaine Greer writes intelligently about the obstacles that woman painters have faced through historyPaperback: 373 pagesPublisher: Tauris Parke Paperbacks (June 2, 2001)
Buy Now

This is the 4th edition of this book. Nearly half of covers the period from 1960 to the modern day when women artists became an important and transforming group within contemporary art