You Have a Flat Tire

You know that sinking feeling. The one that makes your stomach do a slow, backwards, somersault as a groan escapes your lips. "Ugh, my tire is flat!" Yes, a flat tire and it's on your car, so what do you do now? Call a tow truck service so someone will come out and fix the flat for you? That isn't going to be cheap! Take your other car and leave the flat to deal with later? You're still going to have to take care of that flat tire sooner or later.

After this hub you won't have to ask these questions again, because you'll know exactly what to do.

Repairing a flat tire, like a pro, is easy. I wouldn't call myself a "pro", but I worked as an automotive technician and inspector for several years. What I learned from those years is there are a whole lot of repairs the average Joe can perform that we pay mechanics a lot of money to do!

There are five easy steps to repair that flat tire. Depending on your physical agility, you can perform this repair On or Off the car! Repairing the flat on the car is the quickest, but you have to have strong arms to push the plug in. If the tire is off the car; you can put your weight on the needle tool to push it through the puncture site, but if you leave the tire on the vehicle; you only have your muscles to push the needle tool in.

The plug material is the same stuff used by mechanics to repair a puncture. It will last as long as the tire does. I've been using these tire repair kits for twenty years and I've never had a plug fail. 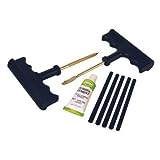 Remove the Tire or Leave It On?

There are as many different wheel well dimensions as there are vehicles on the road, so depending on what kind of vehicle has the flat, will dictate whether you must remove the tire. The position of the foreign object in the tire will also determine whether the tire must be removed. The tire can be left on for the repair if:

If you find it easier to remove the wheel from the vehicle to complete the repair steps, then by all means, remove the wheel. It won't change anything when repairing it except you will have better leverage to work on the puncture in the tire.

Locate the foreign object in the tire by rolling the car forward (or backward), or roll it by hand,until you can see it. If you cannot locate the object by looking at it, then put a good deal of soap on a washcloth or spritzer bottle and add water. Run the cloth all over the surface of the tire or spritz it heavily. After a minute or so, where ever the puncture is a bubble will appear or a bunch of small bubbles will be in one spot.

Now that you have the location of the foreign object: