The oldest NASCAR speedway, Darlington Raceway, was the brainchild of Harold Brasington, a retired racer who was a farmer and construction contractor. He watched the Indianapolis 500 and saw the major crowds that a race could draw, so he decided to build his own track.

Brasington bought 70 acres from a fellow farmer and began to build his track. One stipulation that the seller required was that Brasington had to leave his minnow pond in tact. This led to the track's unique layout.

The Lady in Black

The racetrack at Darlington is unique among NASCAR tracks. It is banked 25 degrees in turns 1 and 2 and 23 degrees in turns 3 and 4. The track is tighter in the first two turns than the other and has a bit of an egg shape. The reason for this unique layout was the aforementioned minnow pond that Brasington promised to leave untouched. The track measures at 1.366 miles, and the 500-mile race requires 367 circuits for completion.

The front stretch is now where the backstretch used to be. The track flipped its orientation in 1997. There are 65,000 seats at Darlington. The track installed lights before the 2004 race. The high speeds and tight turns at Darlington have earned it the nickname "The Track Too Tough To Tame." It is also known as "The Lady in Black" because of the high number of cars that rub the white walls while earning a Darlington Stripe.

The main races held each year at Darlington Raceway was the Southern 500 (later the Mountain Dew Southern 500). This race was always held on Labor Day weekend and was considered one of the most prestigious races on the NASCAR circuit.

By 2004, the Labor Day race weekend went to California Speedway and NASCAR moved Darlington's race to November. The next year, due to the Ferko Lawsuit against the stock car promoter, Darlington lost one of its two race dates.

Today, Darlington holds a race on the Saturday before Mother's Day. The race currently carries the name of the Bojangle's Southern 500. Many traditionalists were angered when NASCAR ended the Labor Day tradition at Darlington.

A Lap at Darlington in the Rain

The first Southern 500 took over 6 hours to complete, and Johnny Mantz, who won from the last starting position in the 75-car field, averaged 76 miles per hour over the course of the race.

The drivers have gotten quicker over the intervening years. The record fast qualifying lap at Darlington is 27.032 seconds, set by Kurt Busch in May 2013. Dale Earnhardt currently holds the record for the fastest 500-mile race at Darlington, finishing the 1993 spring race in 3 hours, 32 minutes and 29 seconds. Earnhardt's average speed was just under 140 miles per hour, nearly twice as fast as Mantz's record speed from 1950. 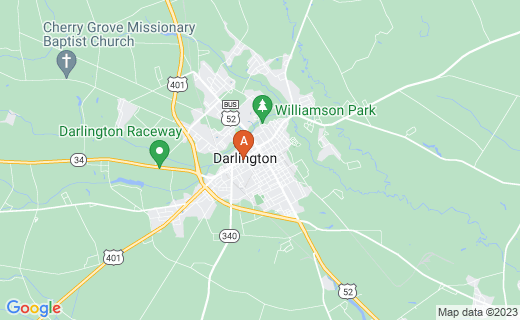 The Darlington Raceway sits just outside of Darlington, South Carolina.