Advantages and Disadvantages of Ethanol Biofuels

Ethanol is a clear liquid that has hundreds of uses in our modern society; it has even been touted as a possible future replacement for gasoline. In nature, this substance is produced by the fermentation of carbohydrates and the microbial degradation of animal waste. In our industrialized world, ethanol is a simple grain alcohol that is refined and distilled from renewable plant sources such as corn. Ethanol is clean, easy to produce, and biodegradable, but does this inebriating substance have the power to cure society's thirst for fuel?

According to the National Corn Growers Association, American farmers produced over 5.1 billion bushels of corn for the sole purpose of creating ethanol last year (2010). Since one bushel (56lbs) of corn can produce 2.8 gallons of ethanol, this means that over 14.28 billion gallons of ethanol was made. Of this, more than 92% of the ethanol was used for fuel (13.23 billion gallons). The other 8% was used for human consumption or to produce many of the health and beauty products that we use everyday. 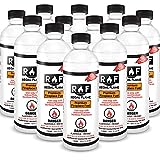 In general, ethanol is a clean burning, non-toxic, non-carcinogenic, high octane fuel that is safer to use than gasoline. In addition to this, pure ethanol is about 1/3 of the current price of gasoline and can be easily produced right here in the USA.

Pure ethanol is never used as a fuel in consumer vehicles. It is always blended with gasoline instead. This does a number of good things. Blending ethanol with gasoline decreases an automobile's noxious emissions, decreases the overall cost of the fuel, and increases the efficiency of the car's engine. Pretty much all gasoline that you can buy in the United States is actually blended with ethanol for these reasons. Today, E10 (10% ethanol and 90% gasoline), is the standard fuel sold at over 90% of the gas stations in America. E10 can be used in any vehicle that is designed to run on gasoline.

Because of the benefits of ethanol, and the problems of gasoline, there has been a recent push toward using more of this substance in our own vehicles. Today, many automakers offer a flex-fuel version of their vehicles. Flex-fuel cars have the ability to either run on standard gasoline or the highly blended ethanol fuel called E85 (85% ethanol and 15% gasoline). At the end of 2009, there were an estimated 8.3 million vehicles in America that could run on E85 fuel. However, this technology is under utilized because the infrastructure to dispense E85 is just not available to most people.

Since ethanol is mostly produced from corn, and corn requires land to grow, you can probably deduce that we would need a significant amount of land to support our ethanol needs in the future. Land is a limited commodity and if ethanol becomes the next big thing, there may not be very much room left to grow other important crops. A 2007 study published in Science Magazine stated that we would need to use 21.5 percent of our existing cropland just to replace an additional 5 percent of the gasoline used in the U.S. with ethanol and biodiesel. Remember, this is cropland that is currently being utilized to produce other vegetables and grains. However, due to government subsidies and some inefficient farming practices, it's hard to know the real impact of ethanol dependence.

When the profitability of corn increases, farmers will be more apt to grow this grain instead of other much needed food stuffs. Increased demand of corn based ethanol will cause its price, and the price of other crops, to rise. The price of many foods and products derived from corn will also increase as a result. In addition to this, if we stopped importing our crude oil and replaced it with home grown ethanol, we may just have to start importing most of our food instead. If this happens, we could become just as dependent on foreign food in the future as we are dependent on foreign oil today.

Surprisingly, an increased dependence on ethanol could also harm our environment in ways that gasoline has previously had minimal impact on. Corn needs more fertilizers and pesticides to grow than many other vegetables do. Increased farm production of corn means that the negative impacts on stormwater runoff will also increase. This could potentially have the compounding affect of increasing the dead zone in the Gulf of Mexico.

So Where do We go From Here?

As you can see, ethanol is a substance that can help supplement our dependence on fossil fuels, but it likely won't ever be able to replace it anytime soon. Nothing in this world comes without a price. It's still too early to say whether ethanol is or isn't the solution to the fuel crisis that we are looking for. I believe that the real solution to our fuel problems lie not with one presumed elixir of the Gods, but with a variety of substances and resources that work together creating a sustainable symbiosis between humans and the environment.