Many companies are offering products that turn ordinary cars into cars that look like real sportscars/racecars which utilize a donor car. This gives it the appearance of the car its meant to appear as, but lacking the cornering performance and character that the original had. Few offer a full chassis with accurate suspension geometry that drives like the real thing. For the average person finding these sites is a hassle, especially if you are looking for a specific car (I've spent hours looking).

People often imagine that buying a replica will be cheaper than buying a production sports car, but often this isn't the case unless a stripped car is bought (a car with only what's absolutely nessesary to drive with absolutely no creature comforts).A Replica can often be bought in parts and assembled at home for cheaper than it would cost to have the seller put it together, but this isn't always straight forward (though some component cars as they are called are specifically designed to be easy to put together).In replicas of old cars the handling is sometimes different because the original drivedrain components which influence the handling/grip of the car can't be found or replicated.Test the car out thoroughly before you buy it. Don't just buy the car online and have it delivered, see it in person first.

I cannot completly vouch for the trustworthiness of these websites and hubpages in no way endorses these sites. At this point the list is a work in progress, but I thought I would share some of the better looking sites I've scrounged up. If you know

Some replicas (known as component cars) can be put together for cheaper than it would cost to buy the car assembled. Below is video of a Caterham being put together on the tv show Top Gear. Many people would be wary or skeptical of a car that was built in there own garages or suspicious that doing something like that at home could even be possible, but component cars have been used in racing for years. Some replicas take their owners years to complete, others only hours.

Video of a Replica being built

Driving and Owning an Automobile Replica

It should be noted that some full chassis racecar/sportscar replicas need to be upgraded before being seriously raced. A select few may even be dangerous. Registering one of these cars so that they are street legal may be difficult in certain areas. 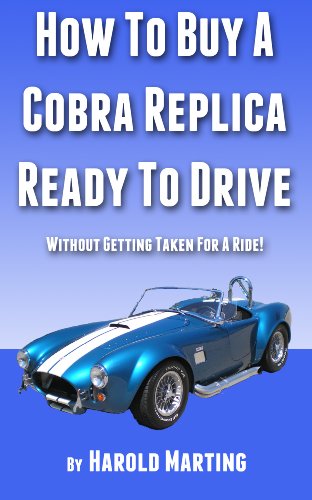