Monitor and Protect Your Car With The 70mai Car Dash Camera

The Value of a Dash Cam

Dashboard cameras started out as being pretty simple: you placed it on your car’s dashboard or on the windshield, plugged it into the cigarette lighter for power and then left it running to record whatever it saw. Later you’d take the memory card out to look at what was recorded if a problem had developed; otherwise you’d just let the camera make new recordings over old ones. Not exactly super-duper high tech. Things have changed, and in a good way that includes a lot more features being added, but that doesn’t mean the camera doesn’t record what it sees — because it does. And price hasn’t kept pace with all these additions, which is really good. All of this is why the 70mai Car Dash Camera is a worthy add-on to your car.

What The Dash Cam Has

Now many people don’t know how one of these in-car cameras works, so let’s break down the easy part of getting it set up. The first thing to realize is that there’s no internal storage for the video — a memory card (up to 64GB) must be put in and so purchased separately. That’s no big deal and certainly a minor cost today.

Otherwise you have everything needed to “install” the camera: you place it onto windshield a bit high up more so towards the passenger side so it can see straight ahead through the windshield and not interfere with the driver’s view — this is done using an included mount. The lens is glass and based on a 140 degree wide angle view and has a F1.8 F stop (meaning it can draw in a lot of light even when it’s dark), combined with a high-definition resolution (so in low light you’ll get a better than good image too). You’d expect internal software would be designed to enhance the image as needed when there’s anything but a clear view driving (examples: hazy fog, snow), so there is.

Power comes from a USB port (i.e, cigarette lighter) and so the cord must be draped either around and down or over and into the port. The power is recharging the internal battery which lets the camera function when the car is at a standstill — that’s for when the car is parked and instead of coming back to find a ding in a bumper, the sensor in the camera would have activated and shot footage for you to review. It’s probably a good time now to note that when the memory card is filled up, it starts to record over the old files, but in the case of something happening with the car parked or in motion, the 70mai knows to “lock” the video file so it isn’t erased.

Now going through the menu means changing default settings so you might want to let that go for the first time or two you use it. And yes, if you’re really concerned about keeping the camera in the car when parked, just take it out and put it into the glove compartment or trunk — it’s not more than a 5-6 minute operation.

So you start the car as normal and forget about the 70mai being there, except it will make its presence known in a few instances other than if a problem (crash, etc.) occurs. It can alert you to veering out of the lane you’re in — be careful not to spin the wheel so hard in the opposite direction that you cause a problem — so it’s best to try it out at a very low speed to be able to recognize/get used to the synthesized voice being made for this. It also can warn if you’re getting too close to another vehicle or veering out of your lane — both of these requiring the GPS module (optional) which provides a functionality that doesn’t rely on a phone. It utilizes a real-time voice alert and a firmware update providing location and car speed is in the works.

The 70mai Car Dash Camera and GPS module are each sold separately and available now. 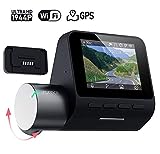