Riding UP: Motorcycle Exploring the Upper Peninsula of Michigan

Yooper; noun: “a native or inhabitant of the Upper Peninsula of Michigan.” That is a term I can honestly say that I had never heard of up until a few months ago. It wasn’t until I crossed the Mackinac Bridge, heading back to Canada from the Blue Ridge Parkway and the Skyline Drive, that I discovered the uniqueness of Michigan’s Upper Peninsula. Unique really is the best word to describe the UP.

The riding on "the land above the Bridge" came as a pleasant surprise to me. After days of tiresome freeways and bland Midwest scenery, the sparsely inhabited land surrounded by three Great Lakes made for a fun and relaxing scenic rural ride. The funny accents, friendly people and pub walls covered in hockey memorabilia made this Canadian feel right at home. I even got an “eh” or two or three along the way from locals. Traveling from the northwest, riders can enter the UP from Wisconsin. Sault Ste. Marie, ON boarders the UP in the northeast, and traveling through Michigan from the south takes you across the awe inspiring Mackinac Bridge. 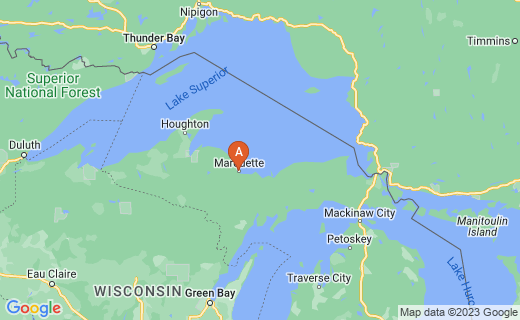 The Mackinac Bridge is impressive in many ways. It is the fifth longest suspension bridge in the world and the longest in the western hemisphere. Its total length is 26,372 ft with 8,614 ft of that suspended by cables, peaking at 200 ft above the water below. The suspended section moves with the wind and the weight of the vehicles crossing it. In severely high winds, the bridge can slowly and safely move 35 ft laterally.

While the stats are interesting, it is the view and what you are riding over that is the most impressive. The bridge connects I75 to the Upper Peninsula by crossing over the Straits of Mackinac. As you ride across, you split 2 Great Lakes, Lake Michigan to your left and Lake Huron to your right. Your eyes wander back and forth between the two sides of the bridge, spotting sail boats, large commercial vessels, and fishing boats bobbing up and down with the waves. The two lakes so close together both give off their own unique feel. Crossing the bridge by way of motorcycle costs $4; a portion of riding is over steel grating, not a big issue, just a note for riders who don’t like the feeling of their bike wandering a bit. Be cautious of high winds when crossing.

The Straits of Mackinac Ship Wreck Underwater Preserve has an abundant number of capsized ships due to the rocky shores, shallow waters, ice, and frequent wind storms making the waters difficult to navigate. Many historic vessels have met their demise here. There are still many undiscovered wrecks to this day in the area. Six notable wrecks include Sandusky (1856), William H. Barnum (1894), Minneapolis (1894), William Young (1891), Eber Ward (1909), and Cedarville (1965). These wrecks are marked with buoys during diving season, and open to exploring if you have the skill and rent the equipment.

Small UP businesses rely heavily on motorcycle tourism. An annual Motorcycle Touring Guide for the area is available free to riders. You will find copies at the visitor’s center after the bridge, as well as scattered all over small gift shops, restaurants, and motels. The area hosts close to 20 motorcycle related events a year to draw in visitors; including show and shines and poker rallies. There are bike nights 3 times a week during the summer in the UP.

The Street Glide is rocking a

Kuryakyn Grantour bag, man oh man can it hold a ton of stuff.

Bikers can get their fill of lakeshore and rural interior riding while visiting Yooperland. Riding the perimeter of the Peninsula, you will be hugging the shores of Lake Michigan, Lake Huron, Lake Superior and the St Marys River. All three lakes and the river make for scenic riding. The interior county roads run through low-lying swamps, lush farm lands and green forests, eventually transitioning into rocky and rugged Superior Upland, part of the Canadian Shield.

Things to Do and See

While cruising the U.P. you have loads of opportunities to take some time off the saddle with abundant entertainment. There are 13 breweries serving up cold and unique beers, a seemingly endless sea of small town pubs and saloons, including the cleaver named Gay Bar in Gay, MI, casinos, and many, many natural attractions as you ride through true northern Michigan nature.

Defunct lumber mills and iron and copper mines have left small towns scattered throughout the UP deserted. Many of the towns have been reduced to nothing but rubble, with partial foundations surrounded by overgrowth. Fayette Historic State Park is a living museum, showing what life in the UP was life in the late 19th century and summertime guided tours are a popular draw for tourists.

With almost 30% of MI’s landmass, containing only 3% of its population, the Upper Peninsula is vast and home to a long list of protected nature areas. Approximately one third of the UP is state or nationally controlled forest land. It is home to the Ottawa National Forest, Hiawatha National Forest, Pictured Rocks National Lakeshore, Seney National Wildlife Refuge, Newberry State Forest Area, Sault Ste. Marie State Forest Area and Tahquamenon Falls State Park just to name a few.

Wildlife is abundant, with the most interesting animals to spot being foxes, deer, moose, black bear and even cougars (locals claim sightings but this is highly contested by many). Many small critters inhabit this area, making for frequent game crossing on the roadways, something for motorcyclists to bear in mind during the ride. As I entered into the land of the UP, turning west in St Ignace after the bridge along Highway 2, I thought there was a forest fire in the distance. This however was a bit of an illusion, as it turned out to be insects resembling plumes of smoke billowing from the shoulders of the road high into the sky. The UP turns out to be the unofficial, maybe should be made official, mosquito capital of the world. The bugs will carry you away if you let them, so bring lots of bug spray and flip down that shield.

If you can tolerate the incessant buzz and biting of the insects, camping is not a problem in the UP. With close to 60 private and state owned camping locations, you’re never too far from a place to pitch your tent and start up a bonfire. Motels are located along the sides of the roads in almost every small town along the UP, for the very reason that motorcycles and nature lovers will be passing through. Many motels offer discounts to riders, so check the Motorcycle Guide book before leaving.