What is a Muscle Car?

Opinions vary among car enthusiasts as to which car should be awarded the title "First Muscle Car". In part, this is because there's no strict definition of the term "muscle car", and different people apply it to different cars.

For the purposes of our discussion, a muscle car is defined as: a small-to-intermediate-sized passenger car (usually a 2-door coupe or sedan) containing a powerful V-8 engine that was designed for a full-size car. A full-size car is not a muscle car, no matter how much horsepower it has, nor is a sports car.

In addition to the GTO, John DeLorean also developed the Firebird and Grand Prix for Pontiac, as well as the DeLorean sports car (perhaps best-known for having been converted into a time machine in the Back to the Future movie series).

Developed under the supervision of Pontiac chief engineer John DeLorean, the GTO was originally an option package for the Pontiac Tempest. GM's policy at the time limited mid-sized cars to engines of 330 cubic inch displacement or less (engine displacement refers to the volume of the cylinders within the engine, with more volume generally meaning more power). Making the GTO an option package rather than a distinct model enabled DeLorean to sneak the car's 389 cubic inch engine around those restrictions.

Sales wildly exceeded expectations. Other auto manufacturers soon followed suit with competing models, and the era of the muscle car had begun. Because it all started with the '64 GTO, many consider it to be the first muscle car. There are cars predating the GTO, however, that others argue meet the definition of "muscle car", even if the term itself hadn't yet been invented.

The 1955 Chrysler C-300, the first mass-production vehicle to reach 300 horsepower (thanks to its first-generation "Hemi" engine), is one of these. The first car to put an overhead-valve V-8 engine designed for full-sized cars into a smaller body, however, was the 1949 Oldsmobile Rocket 88.

The V8 is an 8-cylinder engine with the cylinders arranged in a "V" shape, with 4 on each side.

The video below provides more information about how automobile engines work:

For the 1949 model year, Oldsmobile introduced its new V8 "Rocket" engine. V8 engines were not new - Ford had been putting V8s into affordable, mass-produced vehicles since the 1930s. What made Oldsmobile's Rocket engine special was its new overhead-valve (OHV) design.

The Rocket's engine displacement was 303 cubic inches, and the horsepower rating was 135 HP. Not much by today's standards, but quite impressive for 1949. Within a few years, all of the major auto manufacturers had their own overhead-valve designs, and the OHV V8 engine would continue to be the standard of automotive power for decades.

Oldsmobile's Rocket engine was revolutionary, but equally revolutionary was the way in which it was used. The engine was originally introduced in Oldsmobile's full-size model 98. Oldsmobile had a smaller model, however, the 76, which was powered by a 6-cylinder engine. With the decision to put the new Rocket engine into the smaller 76 body, automotive history was made. The model was named the Rocket 88, and it quickly became Oldsmobile's best-selling car

Both the Rocket 88 and the Pontiac GTO have had popular songs recorded about them ("Rocket 88" by Ike Turner and "G.T.O." by Ronny and the Daytonas). Which car inspired the better song?

The 1949 Rocket 88 quickly became a racing sensation, winning six out of nine NASCAR (National Association for Stock Car Racing) races that year, setting several records in the process, as well as being chosen as the pace car for the 1949 Indy 500.

The Rocket 88 also performed well at NASCAR in 1950 through 1952, increasing the car's popularity, not only among hot-rodders, but among the general public, as well. The 88 became so popular that Oldsmobile eventually phased out the 6-cylinder model 76.

Many people, myself included, cite the Olds Rocket 88 as being the first muscle car. Even if you disagree, Oldsmobile's introduction of the Rocket engine - and the sensation they caused by putting it in a smaller car - must be seen as key events in muscle car history. 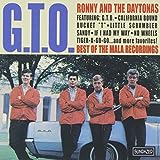