Have you seen the Oscar Mayer Wienermobile?

Seeing the Oscar Mayer Wienermobile is a once in a lifetime thing. Okay, maybe a twice in a lifetime thing. We all remember the Oscar Mayer jingle, we've sung the song, and we've imagined the Wienermobile. But seeing it in person is a thrill. We got to see the Wienermobile this past spring. Maybe you have seen it too! The Wienermobile is America's most easily recognized promotional vehicle! There are six full size and one mini Wienermobiles in service, driving across country to promote Oscar Mayer and spread miles of smiles. Each of the vehicles has its own hot dog name and so do the drivers. They are driven by recent college graduates, dubbed "hotdoggers." The Wienermobile makes stops throughout the country and the hotdoggers hand out whistles and smiles for everyone. If you happen to "ketchup" with the giant hot dog, be sure to bring your camera!

Have You Seen It?

Have you ever seen the Wienermobile?

The first "Wienermobile" was originally the "wiener wagon" of the 1920s. It drove around Chicago with a German band to advertise meat products made by Oscar S. Mayer. In 1936 the nephew of Oscar Mayer, invented the first hot dog shaped vehicle. It had a 13 foot long hot dog body with an open cockpit for the driver on the front and the back. The first Wienermobile was driven by eight different small men who portrayed "Little Oscar," the world's smallest chef. The most famous driver was Meinhardt Raabe, who played a Munchkin in ''The Wizard of Oz.'' This wienermobile drove around the Windy City promoting the Oscar Mayer brand until World War II. In the 1940s, the Wienermobile ended its driving time to conserve gas for the war effort.

In 1952, the Wienermobile was revived. There was a fleet of 5 of them. The 1952 version is on permanent display in the Henry Ford Museum in Detroit. In 1958, Brooks Stephens, an industrial designer came up with a new design that was considerably larger than the original 1936 model. It now included a bun at the base of the hot dog. The futuristic vehicle was now 27 feet long with the signature bubble cockpit and a sunroof. The Wienermobile now traveled cross-country to promote the famous hot dogs. In 1977, the Wienermobile was discontinued as an advertising campaign due again in part to fuel woes.

The Wienermobile through the years

I was shocked to find that one of my friends from church was actually a hotdogger!

The Wienermobile was brought back to celebrate the 50th year anniversary in 1986. People loved it so much, it continues to this day. In 1988, the Hot Wheels toys designer Harry Bradley Bently redesigned the fiberglass hotdog on a GMC truck chassis. Also in 1988, Oscar Mayer started its Hotdogger Program. Hotdoggers are recent college graduates who spend a year driving the Wienermobile cross country. Although the regular Wienermobile is 27 feet long, there is a smaller version out there today built from a Mini Cooper. Cocktail wienies anyone? The modern Wienermobile is high tech, equipped with bucket seats, big screened tvs and recordings of 21 versions of the Oscar Mayer Wiener Song. Each of the six Wienermobiles is dedicated to one area of the country. Hopefully one will be coming your way soon!

This is the newest Wienermobile. It was made in 1988. There is only one of these in the fleet. I've never seen this one. Maybe someday....

Each wienermobile is driven by a team of hotdoggers. These are recent college graduates who spend a year driving cross country promoting Oscar Mayer products. The job is very competitive! Over 1,000 people apply each year, but only 12 are chosen. Hotdoggers attend a 2 week boot camp called Hot Dog High where they learn to drive the 27 foot fiberglass hot dog, learn the history of the Oscar Mayer company, and bone up on hotdog puns like "Have a bun-derful day." A typical day for a hotdogger might include an early morning appearance on a local tv station and then one or two "meet and greet" stops at supermarkets, country fairs, sporting events or other special events. Hotdoggers are recruited every January on college campuses. Hotdoggers have to have "an appetite for adventure, an outgoing personality, and boundless enthusiasm" according to the Oscar Mayer website. They get to spread goodwill as ambassadors for Oscar Mayer as they tour the country. And you have to admit, they get a really cool ride!

Get the story from a real hotdogger!

Dog Days: A Year in the Oscar Mayer Wienermobile
The story of one guy's year long ride in the Wienermobile.
Buy Now

Could you cut the Mustard as a hotdogger?

Would you like to be a hotdogger for a year?

Pictures from our Wienermobile sighting

Wienermobile Trivia - Dazzle your friends with these Frank-tastic Facts

It doesn’t matter how much it rains, sleets or snows, the skies in the Wienermobile are always blue.

What do you think of the Wienermobile?

Well, what do you think? I think the Wienermobile is pretty awesome. But as I was writing this lens, my daughter said that it is just silly. Awesome? or Silly? What is your vote? 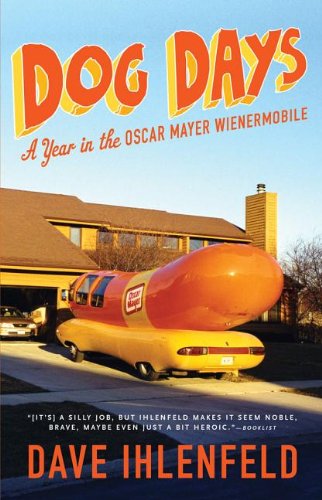 Frank you very much for visiting my Wienermobile lens - What do you think of it?