The XJ Coupe or Daimler Coupe is one of the nicest classic cars to own due to their availability, cheap for sale prices, plentiful and cheap spares both new and from the breakers. Oh, and of course they are simply beautiful to behold!

I may be a little bias though, since I have been lucky enough to own an XJ Coupe, albeit the Daimler Coupe variant of this classic icon from the 70's since 1989, which is 21 years as I write this!

The XJ Coupe, XJ6 Coupe, XJC Coupe and the XJ12C, XJ12 Coupe along with the Daimler Coupe, Daimler XJC and the biggie, the incredible Daimler Double Six Coupe; however you want to name it (!) are all based on the short wheel based Series 2 XJ6 of the time. It is also set to become one of the rarest jaguars ever made as production ran only for a short time and many have already been recycled.

Come on in and have a wander though my lens on the XJ Coupe, a compilation of my experiences and recommendations after 21 years of owning my Daimler Coupe. I hope to build it into the definitive stopping off point for anyone interested in these fine cars.

What's Special About an XJ Coupe?

Pillarless coupes were a popular version for many manufacturers in the 1970s, along with Jaguar, both BMW and Mercedes had one in their line up.

The main benefit was a very clean and cool look when all the windows were down. I never ride with mine up, I am just so in love with the look of the pillarless coupe!

The profile of the XJ Coupe with all the windows down is stunning (IMHO!).

What's also special is the rarity factor of these cars, along with a great resource of spares from the mechanically identical 4 door saloon of which there are many in the breakers yard.

A Little History on the XJ Coupe

and the Daimler Coupe

Jaguar only produced the XJ Coupe (and the Daimler Coupes) for a couple of years or so, finally releasing them around 1975. Rumour has it that the launch was delayed by problems with sealing and wind noise due to the pillarless design.

Based on the existing short wheel based XJ6 with whom it shares nearly all of its components. The XJC was supplied initially in the straight 6, XK engine of 4.2L guise and later the V12, 5.3L was added to the line up. The larger engine car being much the rarer prospect since only 600 odd were made.

I'll add more here once I get back to my books in the UK (in NZ at the mo).

One of my favorite books on the whole XJ Series Range

One of the best books about the Series XJ6 range is the XJ Series Jaguar: A Collectors Guide by Paul Skilleter a great writer on all matters Jaguar. I have followed Pauls work in the Jaguar Drivers Club Magazine for many a year.

Readers in the UK can try to find a copy of the XJ Series Jaguars: A Collectors Guide here.

Unfortunately this book is getting harder to get hold of these days but the hunt is well worth it.

Books on the XJ Coupe - Become an Expert on the Jaguar XJ range!

They say that you are an expert after reading just 6 books on a given subject!

If you are reading this in the UK though, you can find books on the XJ here. 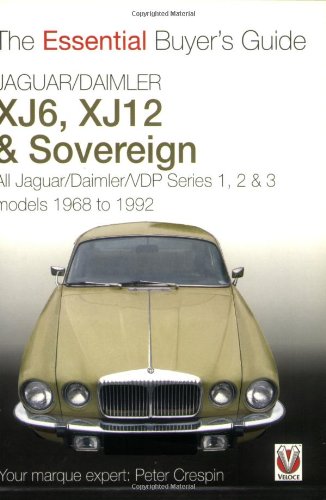