Retired from investment banking and teaching, Philip has authored several books on investing.

To begin with let’s consider one type of business named Dan’s Discount Drugs. This is a sole proprietorship begun by one man. To begin the business, he used his house as collateral for a loan from his local bank. With this money he purchased his first inventory and rented a store in a recently built mall near his home.

This example illustrates some of the advantages of a sole proprietorship: They are easy to set up. Entrepreneurs like Dan can offer personal assets as collateral on a business loan and receive credit relatively easily. Sole proprietorships may also pay lower taxes than other forms of business, because as Dan earns profits from his business, they are taxed only as personal income for Dan.

Many of the disadvantages of a sole proprietorship become apparent as Dan’s Discount Drugs begins to encounter difficult times. First, Dan’s house is collateral for the initial loan, and will be used to compensate the bank should the business fail.  Because the Drug Store is considered Dan’s personal property, Dan himself is now in Debt and all his personal possessions may be used to pay off his creditors. Unfortunately for Dan a sole proprietorship has unlimited liability.

Now let’s look at a different business called Anderson Software. The software business requires various experts on subjects such as programming, graphic arts, and marketing, and this can often mean high startup costs. When Linda Anderson went to start her company she incorporated.  That means she created a legal entity separate from herself called Anderson Software Incorporated.

She had a hard time getting a bank loan, because Anderson Software has no credit history or collateral for a loan. Therefore she had to find a group of investors who now share ownership of the company. With their money she was able to buy the computer equipment she needed and to contract the skilled employees who could make her business competitive.

Right away we see some of the disadvantages of incorporation. They are more complex to set up, and getting capital for the business may be more difficult, although in the long term, corporations are less risky for investors and so are a more attractive investment. This means capital may be easier to obtain as the business grows. One of the largest problems corporations encounter is taxation. Because the corporation is a legal entity, it pays income tax. After this, it pays Linda a dividend which is again taxed as her income. The corporation’s income is thus taxed twice. Once for the corporation and once for the individuals who receive dividend income from it.  Although there are ways to get around this double taxation if companies can hire skilled accountants and lawyers, taxation is one of the great difficulties of owning a corporation.

Now, let’s look at the advantages: If Linda’s corporation runs into trouble, Linda stands to loose whatever money she herself invested in her company. However, her personal possessions are not the property of the company because the company is a legal entity separate from her. So the personal property of Linda and her investors is protected should the company fail. This is called limited liability. Should Linda decide to expand her business, limited liability may make her company an attractive investment for others. She may find capital easier to obtain as she grows the company.

To solve the problems encountered by sole proprietorships and partnerships, a legal structure called the corporation has been set up. A corpora­tion is a legal entity, in other words, a creation of the law. Because it is a separate entity under the law, if the business encounters problems, creditors may only claim the assets of the corporation and not those of the owners. Owners are liable only for the capital they have invested in the company. Because risk is reduced, corporations can often raise capital much more easily by selling portions or shares of the corporation to individual owners. These individual shares are stocks. Corporations have other important characteristics as well. Let’s look at the five features which make corporations different from other business models. 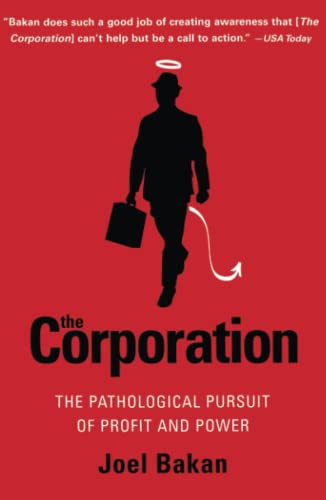 The Corporation: The Pathological Pursuit of Profit and Power
Buy Now

A share represents a share of ownership and an investor who buys shares in a company is buying part of that company. He or she will share in the company’s successes or failures.

All common stockholders have voting rights which includes the right to select the board of directors, as well as to vote for any fundamental changes in the company, such as consolidation or dissolution. A shareholder is also entitled to any dividends paid although declaration of a dividend, either in cash or additional shares, is at the discretion of the directors of the company. The value of the stock varies with perceived value of company as if the company does well the value of the shares will increase, if it does badly the value will decrease. Shareholders have the right to demand information on the company they own shares in. In addition shareholders have the right to buy or sell shares in the open market or privately. A transfer agent (usually a commercial bank) holds a record of all shareholders and the number of shares they hold.

Unless limited by law or the company’s founders, a corporation is assumed to have an unlimited life.  Accountants refer to this as the going concern assumption. The assumption, without evidence to the contrary, that the company is a viable business.

A corporation is a legal entity and has legal status. Because it is a legal entity, a corporation can enter into contracts with others. It can also sue and be sued. It is governed by its articles of incorporation, the charter issued by a state or a national government, and the bylaws adopted by the Board of Directors that govern day-to-day activity.

There are two ways for a corporation to raise money: Debt and Equity. Debt is usually a loan or a debt indenture such as a bond. When a company raises capital by borrowing it, the company assumes debt. This may take the form of a bank loan, or of a bond or other securities issue. In both cases, the company receives money which it later must repay with interest.

The second form of raising capital is called equity capital. With equity, a part, or share of the company is actually sold outright to an investor. This is accomplished through the sale of stock in the company. Part of the profits of the company is paid out to this new owner in the form of stock dividends. Because stocks represent outright ownership, they can be traded as assets between individual investors. The value of the stocks will, of course, rise and fall with the success and failure of the company. When the company sells this outright ownership as a part of itself, the sale is considered permanent. So unlike bond issues or loans, equity capital is not limited to a fixed term.

In the next article in this series we will look at the categories of equity.