I have been helping managers to communicate with their teams for many years. Here's what I tell them about giving feedback.

Don't rely on "The Force"

Over the course of one particularly long wet winter weekend I embarked upon watching all six episodes of Star Wars and I remarked to my husband about how many managers appear to try using the techniques demonstrated by Master Yoda, even though the Force is not strong with them. They appear to have a problem talking to their teams about some pretty important stuff: performance issues, what motivates them etc.

One example in particular leaps to mind from many years ago. A manager had asked if they could meet with me to discuss the performance of one of their team. No problem. After listening to them wax lyrical about the many and varied issues they had with their team member, I waited for them to pause and draw breath then asked them "What was their response when you discussed it with them?" "Oh" came the reply, "I've not said anything to them about it."

Not the best plan...

The simplest model to use is the AID model: Action, Impact, Desire.

Action: Explain what it is that is happening (or not happening).

Impact: Why is that a problem? What is the impact of what they are doing/ not doing?

Desire: What do you want them to do instead?

(Action) “When you speak over me in meetings”

(Desire) “Next time could you just hang on until I’ve finished talking before making your point?”

When it comes to the 'Impact' stage you can choose to focus on either facts or feelings. The example above fouses on facts; a feelings version would be "I feel as if you don't respect what I have to say" - go with whichever one you feel most comfortable with, but always own the feeling. I.e. "I feel" not "You make me feel".

Of course I can't guarantee they'll take your message on board with a smile; but it's a rather more effective approach than relying on the Force. 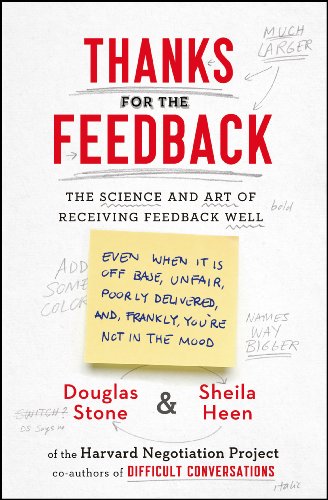 Thanks for the Feedback
:
Buy Now

Put yourself in their shoes...literally...well, almost.

There's one tip I talk about on all of my 'giving feeedback' courses which makes people think I've lost the plot a little and it's this - swap seats. Sounds bonkers, doesn't it? But we are very attached to our seats - think about the last time you attended a training course; you chose your seat at the start of the day and stuck to it throughout. In a modular course I've seen folks make a beeline for the same seat for every single module. We like our seats and feel quite territorial about them.

So the next time you're giving feedback to someone try swapping seats; it will help you think about how you look to them and how they may see you. If you don't want to do it with them in the room then get to the meeting room early and spend a moment or two sitting where you'll expect them to sit, then look at the space where you'll be sitting. What do you see?

If we better understand how we look to them we can be more considered in the feedback that we give.

The final thing to consider when you're giving feedback is your body language. If you're trying to smile through gritted teeth whilst all the time thinking how annoying the person in front of you is, then that's likely to seep through during the conversation, so don't just think about the words you're going to say, spend some time thinking about how you will say them. Rehearse if needs be, even if it's just to an empty chair.

It's also worth reminding yourself that the person in front of you isn't all bad, they will have some redemming qualities, and you don't really know what is driving the behaviours you're seeing. There are very few people in this world who get out of bed in the morning and are determined to get themselves fired, so try not to judge too swiftly; give them the feedback and then give them the opportunity to offer their side of the story too.