Casey Carle is a performer who has inspired my entrepreneurial dreams for over ten years. I first saw his performance in 2003 when my son was a Boy Scout. While all the scouts and parents were amazed at what he could do with bubble solution, I was quite excited that this man had turned his passion for bubbles into a full-time business. He has now been performing his one-man Bubblemania! Show for the past 23 years.

Mr. Carle grew up in Upstate New York in the little town of Greene. Being one of nine children in a household of eleven people, he needed to find a way to stand out. He graduated cum laude from the Southern University of New York ( SUNY) at Geneseo with a Bachelor of Arts degree in Drama. He really enjoyed performing in the theater, and especially for children. The more outlandish he could act, the more he enjoyed it. When a friend suggested he go to clown school, he enrolled at the Ringling Brothers Clown College (yes, there really was such a school!) and graduated from there with a Bachelor of Fun Arts! He now regularly tours the United States and internationally, bringing his BubbleMania! Stage show to people of all ages.

Mr. Carle has worked professionally in the entertainment field since 1985. He entered the circus and tried many different types of variety acts. These included juggling, unicycle, and magic. But he found what he liked the best was working with bubbles. He enjoys making people laugh, but he also enjoys the wow factor that creating amazing bubble art and showmanship can provide. After working with the Ringling Brothers and Barnum and Bailey Circus for two years, he went solo with his Bubblemania! Act in 1990 and has never looked back. He currently performs approximately 350 shows each year allowing for a comfortable lifestyle and a nice home in rural East Haddam, Connecticut. The lengths of his shows can range from twenty minutes to eighty minutes depending on the size and composition of his audience. The best age group for a BubbleMania! performance is age 5 to 95! The venues and audience sizes cover a wide range of types and travel distances, and therefore, so do the fees for the program. Part of his success as a businessman is recognizing this and demonstrating a reasonable and fair approach to each potential client that inquires after his skills. He performs in theaters, Science Center, at corporate events, schools, shopping malls, festivals, at conferences and for civic groups. Audiences range in numbers from fifty to one thousand. His BubbleMania! shows are a combination of comedy, Big Band Jazz music, and bubble artistry. They include making a bubble spaceship that spins and then flies away, bubbles filled with fog, and actually putting a person inside of a bubble. This last trick definitely creates the wow factor, and that is the one part of the act I saw ten years ago that I remember very vividly. He does not do birthday parties but has now franchised his bubble show to include three more entertainers who are available for smaller shows and birthday parties in the states of New Jersey, New York, and Southwestern Connecticut. And in 2008 he created a two-man show with friend and fellow performer Doug Rougeux. Together, they perform, Bubble Time! which is a show with a story line as the two work off of each other's comedic presence, with the main story line, of course, involving bubbles!

In case you might be thinking that there’s something,” unbubbleevable” about Mr. Carle and that it’s not possible for someone who plays with soap bubbles for a living to earn a living, take a look at some of these professional credentials:

In reviewing how far Mr. Carle has taken his bubble making and comedic talents over the span of his career, I am consistently amazed and inspired by him. There is hope for all of us with entrepreneurial dreams, and Casey Carle is proof that people can take their passion and combine it into a sustainable and highly enjoyable career.

Here's an assortment of bubble wands I have used with my children and they keep them entertained for hours! 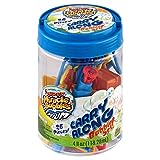