He is Still Looking for Employment

Background: My husband is a felon, a status he will have to live with the rest of his life for property crimes committed at age 14. You can find my original hub here concerning details on his background.

He's been looking for gainful employment for a very long time now. He's gone through many temp agencies. Sure, they'll supply him with a days work here or three days there occasionally. He even made it past his 90 days on a temp to hire job and got let go 3 months later since the company didn't hire him on.

He's a hard worker, he had his name up on the human resources board for completing his tasks more accurately and quicker than anyone in the company, EVER.

They didn't want to hire him on, it's easier to just use and replace temp employees in this day and age.

As of this writing, he's on a job interview. It's temporary through the holidays but at least it's something. Any kind of job is wonderful at this point.

He's gotten much practice at interviewing, so that's a plus but he just can't seem to get past the interview to the hiring part of things! This becomes extremely frustrating and depressing at times.

I see him, I see the hurt in his eyes when he gets another denial letter in the mail. The frustration or anger at his situation. I am supportive but deep down inside, my support doesn't fix things for him. Unfortunately for me, I'm a fixer and I cannot fix this which frustrates me even more.

Why can't they see that he's not that teenager that make stupid choices anymore?

Is being honest & upfront about his background more detrimental than lying about it or acting like it never occurred?

On every application, in every interview he has openly admitted his mistakes if questioned about them. On the applications he adds that he is willing to openly and honestly discuss his felonies.

He can even be bonded by the state of Wisconsin at no charge to him or the employer if he is offered a job.

None of it matters or so it seems.

So my update is not that much of an update in reality.

He's still searching. Hopefully he finds what he needs.

We, his family, stand behind him and emotionally support him and will continue to do so.

Anyone out there want to hire a hard working, honest, father, husband, son, & brother that made some teenage mistakes? Felon or not - He's just like you & I, trying to make it in this life.

Do you believe that bonding is an incentive for hiring a felon? 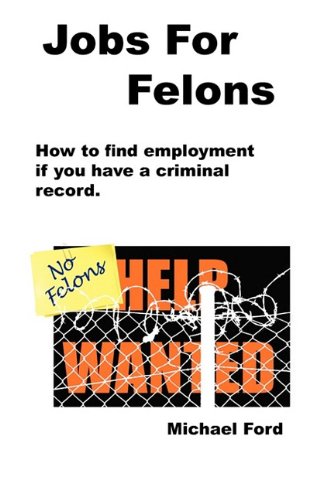