The most job openings and new jobs created in the this area will occur in the occupational categories on the Top 10 List below.

The number of jobs to open in the Healthcare Industry is twice the number to open of the second largest high growth job category of transportation.

The following job categories offered large numbers of new jobs through the end of 2014 in Harrisburg and surrounding smaller cities. These industry sectors remain top contributors to the local economy, with the sector of Healthcare adding itself with quickly increasing numbers of new jobs.

Growing Companies Hiring the Most Workers in 2019

The Harrisburg-Carlisle MSA is a Metro Area located in Southeastern Pennsylvania in Dauphin County. Harrisburg has been recognized in the 21st century by financial magazines and analysts as one of the Best Mid-Sized American Cities for Jobs and Business.

The Metro Area and surrounding counties were populated by Native American Nations for 10,000+ years before European and other settlers arrived.

The French and Swiss first entered Pennsylvania in the early 1600s, but did not build a fort or a town at Harrisburg. Building was done by John Harris, an Englishman, around 1710, almost 100 years later - but only a small settlement known as Harris Ferry. His son built Harrisburg later. By 1812, it was the capital of Pennsylvania. 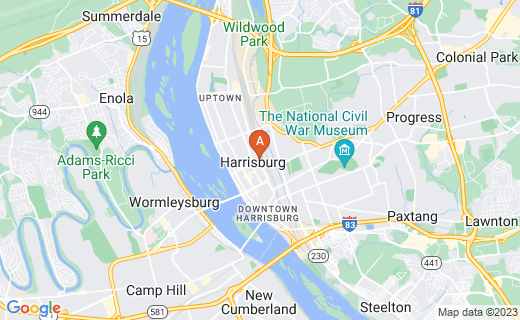 The elder Harris's men traced the paths of the Shawnee and Delaware nations in order to find crossing points across the Susquehanna River. This led to transportation and shipping in the 19th century.

Situated right beside the Susquehanna River, Harrisburg saw the steady rise of railroads and the Erie Canal to become an early American transportation hub in an industrial region full of mines and manufacturing.

Some of those industries declined in the 1970s, but in the 1980s, Harrisburg began to grow with new economic initiatives to draw a lively tourist trade and new retail businesses.

The John Harris Mansion and estate are a major tourist draw, the city being named for the Harris family.

The Capitol building is one of the largest well done architecturally artistic US Capitols in the country, modeled after St. Peter's Basilica in Rome. It brings the same type of admiration.

Harrisburg is the site of several yearly festivals:

This local community college brings students, the community, and area businesses together in a number of ways.

The college offers a number of opportunities for employers to come in and hold Job Fairs on the campus. In addition, Career Symposia are held regularly that target education professional and state level participants.

Employers and businesses recruit new employees from graduating students, Further, career exploration is facilitated during Career Days. Students and internships as well as full-time career positions are easily matched in these events.

The HACC Institute for Entrepreneurial Studies is a continuing education venue that helps persons interested in business ownership to plan, open, and operate their dream businesses. Counselors work one-on-one with future business owners throughout the process.

The college also offers non-credit courses and basic computer training for the community.