After A Job Interview Should I Send A Thank You Note Or Email?

Is Handwriting an Obsolete Chore?

writing thank you notes for being afforded a job interview has met with resistance, derision, and objection in the 21st century. for the most part, Generations X and Y seem to dislike hand writing notes to interviewers, while Generation Z prefers to simply text messages or ignore sending a thank you at all. times change, but professionalism does not.

What Does "Thank You" Mean?

An official Thank You of some type is important in order to show respect, courtesy, and interest in the job and company. This is true, because the company spent time and money on you to interview you, such as the interviewer's salary and time.

Even though many American high school stopped requiring students to know the multiplication tables and the skill of cursive writing, the number one expected Thank You after the job interview has been the handwriting thank you card or note. This expectation seems to be diminishing in the mid-2010s, but many employers and interviewers do not see thank you emails and never see them. A thank you text is simply too crude and off hand.

In the 2010s, many young job candidates say that they should be able to simply email a short thank you, because 1) it's faster and 2) they don't like to write or even print.

Unfortunately for them, their desire on the subject is not as relevant s they believe, nor is a sense of entitlement that a few may have. Best advise is to get over it and write a thank you note. At least craft a professional email and then send the note at your first opportunity..

Among thousands of employers in top companies and within a variety of company sizes, the note card is still Number One. Why? --

Although we have a cohort of younger CEOs these days, we must remember that once a CEO takes office, he or she is likely to stay in that high-paying position until no longer able to work - say, age 80 or 85 or even longer. We have a huge number of older CEOs still active in America and often, they like to see the thank you card. Thy will continue to do so for at least another 50 years and our younger CEOs may begin to retire at a earlier age by then. Remember Young Mr. Grace at Grace Brothers Department Store on the BBC sitcom Are You Being Served? His character had to be 90 years old.

Showing respect to older people or to those in charge of a business is not "selling out." It is only showing appreciation for their longer lives and accomplishments. We need to do so and to expect others to give us the same respect in the future when we are in the authority positions. 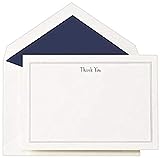 From Thank You Letter To Head Honcho

In the mid 1990s, I applied for a position and sent a Faxed one-page typewritten thank you letter as follow-up to the supervisor who interviewed me and was a decade younger. This is because it has always been my habit to thank interviewers for spending time with me. No one ever instructed me to do this.

Two job candidates were equally qualified for the position - myself and a gentleman.

I was hired for the position, because I sent a formal thank you letter and he did not. under three years later, I was head of the division, because of skills, results, and good follow-up.

It is true that some companies are completely immersed in Information Technology. It would seem that notes, letters, and announcements could all be replaced with online communications. Job candidates that are sure about this status within a company to which they apply can feel safe in sending a Thank You Email if it is well written and sounds professional. I suggest sending a thank you note card as an additional follow-up. I've done it myself and it seems to work well.

Instead of an additional note card, job candidates may think about a well-worded email followed up by a short Faxed Thank You Letter. They should not text in text-ese language from their cellphones.

One job seeker I know sent a gift fruit basket to his interviewer it was received as being a little over the top, a bit inappropriate. During a Holiday Season, though, I think it might be appreciated. Use your own experience and your own good judgment to decide upon these extra steps.

Opinions and Practices From Forbes.com

My Hub Get the Job of Your Dreams with Interview Follow-Up in based on 15 years of work in the field of Education and Training for work development. I was privileged to work with thousands of adults and youth all the way down to age 13, conducting training sessions for employment for full-time, part-time, internship, and volunteer work.

All of these positions required a proper thank you note sent after the job interview.

Along with the work of hundreds of job coaches and E&T professional in our country, my classes and workshop taught job seekers about preparing resumes, interviewing skills, and follow-up steps that work. A thank you must be sincere as well as properly written.

At Forbes.com in August 2013, columnist Lisa Quast echoes what I've been saying for years about the importance of job interviewing and thank you notes. She shows that employers often agree with us as well.

Quast tells us that the temp agency Accountemps feels that 87% of employers they asked accept email thank yous for interviews. I don't know all the details, but this might mean 87% of employers speaking with temporary job candidates. Candidates for full-time regular work might be expected to send the note card. One employer, Susan Sprague, writes in to say:

"The thank you note made the difference in two very close hiring decisions – the candidates who sent the thank you notes got the jobs. One was hand-written and the other was typed, but that finesse gave them the edge..."

One problem we're seeing reported across the Internet other than at Forbes.com is that new sales representative employees are emailing clients with a sales pitch rather than calling them and speaking with them personally. As a result, sales are decreasing. Some employers and HR officers feel that emailing thank yous for an interview is just as impersonal and unsuccessful.

I'd suggest emailing a message that is fresh and not simple "Thank for for the interview. I hope we will be working together in the future." Give it some personality and include some relevant information not included in your interview. Then follow-up further with a thank you card. Just mean what you say. 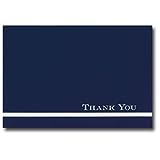