Newburgh is located in Orange County, New York, in the historic Hudson River Valley not far from New York City and its frenetic 24/7 pace. Newburgh is growing, but still affords residents and visitors some peace and quiet.

Named as one of the 25 Best Small Cities for Jobs and Business in America, the city offers small town life with close proximity to the big city lights.

Home to approximately 28,000 people, Newburgh experiences a low crime rate among a diverse population that is largely Hispanic, African American, and Caucasian by thirds (without a statistical racial minority or majority). In addition, Orange County NY with over 10% growth is the fastest growing county economically in New York State, which has produced less than 2% growth overall in the 200s and early 2010s.

Transportation avenues make this area a major "crossroads" of he State of New York. You can see an International Airport, the Hudson River, and two major Interstate Highways in Newburgh. 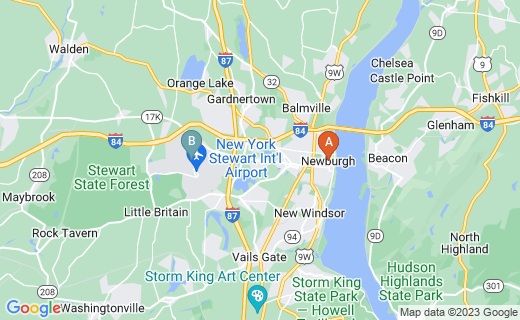 The Newburgh-Stewart Empire Zone is similar to an Enterprise Zone - It is a federally established area in which business incentives are established to attract new companies, expansions, and new jobs to the region. Incentives include reduced or temporarily waived business taxes and others. This Zone includes both the Town of Newburgh and the City of Newburgh, along with the Town of Windsor in Orange County.

Enterprise Zone requirements in Newburgh are to increase new jobs in each new incoming business enterprise by:

The local Workforce Investment Board and partnerships with community based organizations (CBOs) such as businesses and educational institutions have helped to not only create these new jobs in the zones listed above and even outside those zones, but to train people to fill these jobs. This will continue revitalize the Newburgh-Stewart Metro Area in order to overcome economic obstacles in the community.

This initiative dates back to 2004, when New York State considered Newburgh among its Top Five Most Stressed Cities, because of its conditions of having many single mothers running households alone, high unemployment rates overall, a high poverty rate, an abundance of abandoned buildings, and a high number of adults that were high school dropouts. However, in just three to four years (2008), Newburgh became one of the 25 Best Small Cities in America.

A "Best City" in the USA

City of Newburgh Founding and Expansion

The incoming settlers wrote that these Indigenous People were friendly, close-knit, and peaceful. The native people were part of the larger Lenape group within Algonquin Nation. Henry Hudson was an Englishman working for the Dutch, exploring the river in the valley to a point north that became Newburgh in 1609.

Intent on building a settlement, Hudson was met on land by the Waoranek, who shared food with the incoming people and even taught the settlers farm crops like corn, squash, and beans. Then the native moved on and into the west and north areas of NY, leaving the Europeans to live at Quassaick Creek and thereabouts. Various other settlers joined the group later and the community expanded.

During the Revolutionary War, Newburgh became the "Birthplace of the Republic." General George Washington ran the war from this town and afterward, refused to be crowned America’s King. Peace was mustered at this town and Washington maintained headquarters in the Hasbrouck Family's house, purchased by New York in 1850 as the first US Historic Site in America. It was at Newburgh that General Washington awarded the first Purple Heart, known then as Badge of Merit.

The Hudson River became a vehicle that spurred tremendous commercial growth in the 19th century, the largest expansion occurring during the American Civil War, Reconstruction, and the early 20th century. Manufacturing, recreation, and retail shopping thrived up through World War II and then suburbs grew, while the inner-city failed all over America from the 1950s - 1980s.

However, the urban areas have been revitalized across the USA, with work ongoing to improve them, and the neighborhoods reconstructed. Metro Areas are thereby growing larger as suburbs and cities grow to meet one another's boundaries.

The History of the Hudson River Valley: From Wilderness to the Civil War
Buy Now

Murals on the Waterfront

Newburgh features its East End Historic District that includes over 4000 buildings registered with the US National Historic Register. It has more historic buildings than any other site in New York State. Back in 1996, the National Trust for Historic Preservation recognized the Historic District on the list of "The 11 Most Endangered Historic Places" in the nation. Continuing work toward preservation of the city's history is the mission of several local community organizations.

Today, while the City of Newburgh is hard at work on creating new jobs and reserving historic places, it continues to build up its modern Hudson River Waterfront district as well.

Activities in the area include sightseeing cruises, shopping, restuarants, and nightclubs that include Monk's House of Jazz and Pineapple Larry's. Other local sporting activities include yachting, ice skating races, and fishing on Orange Lake and Chadwick Lake.