Liberty Bell History: Who Ordered It And Who Paid For It

The Liberty Bell - A Symbol of Freedom

There has been much written about the Philadelphia Liberty Bell, but much of what is accepted as "common knowledge" isn't exactly correct, and there are still questions, like; "Who ordered the Liberty Bell, and who paid for it," that seem to have multiple answers. Even when it's famous crack occurred, which is often thought to have happened when it was rung on July 4th 1776, to celebrate the U.S. Declaration of Independence, is still a hotly debated issue.

There are many other Liberty Bell "facts" that also aren't the real facts. Even the cause that turned it into an icon in American history is not the one most associated with it.

It may have become a symbol of American independence, but it started out as a tribute to a prominent family, not to U.S. liberty, and that famous crack, actually happened 70 years after most people think it did.

The Liberty Bell was originally intended as a tribute to celebrate the 50th anniversary of the William Penn family's 1701 Charter of Privilege* for the people of the province of Pennsylvania.

And there was not just one Liberty Bell, there were two.

*William Penn was appointed to the position of Governor and Proprietary, (King's representative), of the English colony established as the province of Pennsylvania and Territories by King Charles. To promote the success of the province Penn wrote a Charter of Privilege that granted all "Freemen, Planters and Adventurers therein, divers Liberties, Franchises and Properties" In other words, it was a declaration of liberty and freedom for it's inhabitants.

See the full text of Pennsylvania's Charter of Privilege.

William Penn, the Penn family, and the Charter, all served to grow the province into a thriving self-governing colony with it's own Assembly.

In 1749 the Pennsylvania Assembly ordered a State House to be built, and that it include a suitable place for a bell, and in 1751 it ordered that a bell be purchased. Thus begins the story of the Liberty Bell.

Who ordered the Liberty Bell

Who actually paid for the Liberty Bell? 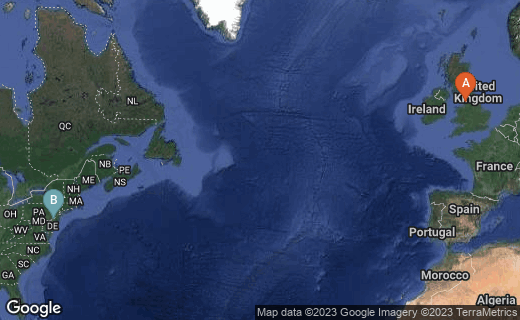 The story of the two Liberty Bells

Although there were two bells bought from the English foundry, the original is the Liberty Bell of America's history. It is known as the Pass and Stow Bell.

Why two bells? - The Liberty Bell arrived in Pennsylvania in September 1752, but the State House wasn't ready for it until March 1753. It is known from correspondence between Norris and Charles that when the bell was rung to test it's sound - it cracked, and those in attendence of the event were not happy with the sound of its peel. But this was not the iconic crack the bell is recognized for.

It was decided that the bell should be repaired, and two workmen by the names of Pass, and Stow were hired to do the repair. Using a copper and bronze mixture they re-cast the bell, but folks were still dissatisfied with the bell's sound. There were original propositions to send the bell metal back to London for recasting, but the Pass and Stow bell, (as it was now known), remained in the State House, and Agent Robert Charles ordered a second bell from the foundry.

When the second "Liberty Bell" arrived, and was tested, the sound was no better than the first. This second bell was installed in the cupola of the State House and connected to its clock. It is this bell that rang out the time each day for the citizens of Philadelphia, but it was the original Pass and Stow bell, (that was still hung in the State House), that was used for special events and summonses, and became known as The Liberty Bell.

Did you know the "real" history of the Liberty Bell crack?

When even wrong information is wrong...

Many people think the Liberty Bell got its famous crack when it was rung to celebrate the U.S. declaration of independence on July 4th, 1776, but in truth the bell did not ring that day at all. July 4th is the day the Declaration was first printed, it was not until July 8th that it was first read to the public, and that was the day the Liberty bell first rang for the Declaration of Independence, but it was not the day it cracked.

The Liberty Bell's famous crack, and the last time it ever rang, occurred on February 23, 1846, when it was used to announce the celebration of George Washington's birthday.

Reporting for the Daily Constitutional, and providing articles for various online publishing sites are my primary work responsibilities, but it is the freelance editorials from the Curmudgeon's desk that provide the most satisfaction. - GAA

See more of my writings at:

Need a soap box for your views?

Want to be your own political pundit? Do you need a soapbox for your political views? Just want a place to rant about all the dummies in the political arena? Do it on Hubpages! Establish your own writing credentials free, and make money doing it. Learn more, and get your free author's account at Hubpages.com