If someone finds something like dirty or unsafe conditions in a business that could possibly endanger the health and safety of their patrons, I think the businesses response should be a proactive one, attempting to correct the problem. I also think the business should try to keep the problem from going out of control again. But maybe that's just me.

In the case of some Phoenix area McDonald's recently, it appears that they took the "easy way" out instead of really addressing the issue that brought attention to their facilities in the first place.

An Arizona State University professor, and mother of four, Dr. Erin Carr Jordan started recording and posting video's about unsanitary conditions at several Phoenix area McDonald's. She had tests done on "swabs" from the playground equipment, and she posted results on the internet, which drew the attention of local and national news. She even built an international following.

The results of the lab tests she did are mind blowing! Bacteria of all kinds, some VERY dangerous... according to Carr-Jordan, " rather than have someone come into the playgrounds and do the right thing and make them clean and safe, they told me not to come in any more."

Talk about attempting to "sweep" something under the rug! Now in a statement from McDonald's, they said that they take feedback very seriously. Evidently they do! Don't complain, or you'll be banned? This appears to be their idea of taking things seriously.

They DID say that they engaged in "open dialogue with Dr. Carr-Jordan in an effort to address her concerns and review her findings." But then they go on to say that because she was "disruptive" to their business, which prompted the attorney's letter, she was banned.

Now McDonald's did also say "we remain committed to working with an internal team on ensuring that our PlayPlaces are clean and safe for all customers." Makes me wonder what the word "committed" means here? Is McDonald's "committed" to quickly squashing any negative publicity, instead of making a sincere attempt to clean these play places?

I know when our boys were young, I would take them to these play areas, not fully understanding how nasty they could be. And I really did NOT realize that there are currently NO regulations on the state or federal level that require these establishments to have CLEAN play areas for children. NO regulation! To me, keeping areas clean and sanitized should be a part of your operation without regulation, but without any regulation, it seems that things are "let go" and soon become trashy.

We used to take our two grand-daughters to a play place called Monkey Joe's and I was relieved to see that they were not on the list of trashy play areas that I found on the website called kidsplaysafe.net.

Monkey Joe's advertises right on the front page of their website that their inflatable climbing areas are cleaned regularly by Swisher Sanitation, as they should be! This to me shows at least some level of corporate responsibility and concern for the health of their patrons.

In addition to the bacterial dangers, there have also been reports of McDonald's PlayPlaces with broken, cracked equipment, as well as climbing ropes being held together with duct tape. Yep, you read that right, duct tape! This information was pretty unsettling to me, and if our children were small, you can BET I would be "inspecting" play equipment before they would even be allowed to climb on it.

But shouldn't this be the responsibility of the establishment that owns the play equipment to inspect and correct these issues? Yes, parents can look at them and tell their children not to go on equipment that they feel might not be safe. But, it also seems like it should be the responsibility of the business as well. Now if these parents were to report a problem, would they, too, be "banned" from the establishment?

When I first read this, it blew my mind that THIS was a corporate response to an issue that could potentially be so detrimental to the health of the patrons. What an inappropriate response!

Pathogens were found on this equipment that could potentially cause meningitis, sepsis, infections of hair, skin and scalp, as well as gastrointestinal disease and infections, nausea and vomiting.

I realize that we will never live in a "germ free" world, and to think that we can is foolish. But, it seems that some sanitation measures can be taken to try to prevent some of these potentially serious illnesses, especially when the risk comes from unsanitary surfaces.

Now being around toddlers, I totally realize how in an innocent way, they can be pretty "gross" sometimes! I say that in a loving way, because they are so cute and precious, you can't resist their little smiles! BUT, they have no idea that the things they do can be potentially harmful to their health, and it is our job to try to keep them safe from these harmful things.

Now I've seen little ones pick noses, wipe noses, as well as "dig" into their diapers (ooooohhhhh, SQUISHY!!!) They are fascinated with things, and are learning every waking second of every day, but they are innocent... they have no idea of the GERMS that they potentially could be introducing, usually into their MOUTH, that could be dangerous, or even fatal!

To be fair, Dr. Carr-Jordan didn't only visit McDonald's restaurants in the Chandler - Phoenix Arizona area, she has visited others as well in eleven different states. And none of them fare much better than the Arizona ones did.

Some of the bacteria found is present in a lot more places than just playground equipment, and attention to diligent hand-washing can be helpful. But we all know that a lot of children are not as "diligent" as they should be about hand-washing. It's a good habit to get your children into, at a young age.

In one restaurant recently, Erin Carr-Jordan found that a restaurant worker was diligently cleaning the table tops and some of the banisters near the children's play area, but that workers didn't go into the play areas themselves to clean them. More attention needs to be paid to these areas, and if possible, perhaps they could be sanitized at least nightly. Maybe there needs to be drains in floors, so the equipment surfaces can be "sprayed" at the very least, with an anti-microbial solution.

From her findings, however, it seems that it will take more than that to really clean these areas. On her first trip to one of these play areas, she found areas that were "sticky" and there were curse words and "graffiti" on some of the equipment, as well as matted hair stuck to the equipment, and an abandoned band-aid. She promptly brought it to the attention of management, and in a later visit, it was still not cleaned up. This led to her taking some samples and having them tested.

From New York to California, she has been inside of play areas, and this is not limited only to McDonald's, it also occurs at Burger King, Chuck E. Cheese's, Peter Piper Pizza and others as well. She tested nearly 50 play areas, and only had ONE come back essentially free from pathogens, this was at a "Chick Fil-A" restaurant not far from her home. Now it is the only place she allows her children to play in.

These play areas are considered to be "non-food" areas, and are therefore not required to adhere to the strict cleanliness that other parts of the stores are. And from Dr. Carr-Jordan's calls to health officials, she has found out that they would only get involved IF there is a "major disease outbreak"... you mean it will take THAT before something is done?

Perhaps a better response on the part of restaurants that have these play areas would be a pro-active one... how about cleaning the areas, making it a regular thing, and advertising that you DO clean your play area? I would think that would be more effective than simply banning someone who has found problems from your restaurant, don't you think? How about turning a negative into a positive? To me, that would be a much better solution. Parents would be thankful for the thoughtfulness as well.

Where Do You Think The Safest Indoor Play Areas Are For Kids? 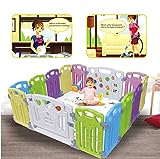