Ethics is the set of moral principles or values that define right and wrong. It is more than that though. It comes in your conscious. Most people can automatically tell what the right thing to do is. However, much of one’s values is dependent upon his or her background. If a person was not taught how to be ethical as a child and had no role model to look up to, his or her sense of morality may be very different from the norm. A person with strong ethics is more likely to be hired by a company, retained, promoted, and happy. Knowing that you have done the right thing cause produce the feeling of happiness.

People live their lives according to the standards of right versus wrong behavior. This is considered their personal set of moral standards or ethical principles. One’s morals and values are essential parts to the level of ethics he or she has. In fact, morals and values illustrate one’s character. Ethics also illustrates how one thinks and behaves towards others and how one would like them to think and behave toward them.

Business Ethics: Decision Making for Personal Integrity & Social Responsibility
This book helps you apply an ethical decision-making model. It also helps you learn ethical skills, vocabulary, and tools that can be applied to everyday business decisions. This book teaches the fundamentals of business ethics. The goal of this book is to provide a comprehensive yet accessible introduction to the ethical issues arising in business today.
Buy Now

Ethics provide guidance for individuals on how they are to conduct themselves on a daily basis. Often, the choice of what is right and wrong is unclear. When one is faced with a tough choice, they may wish to look to others for examples or advice. Since ethics is based on one’s morals, their religious beliefs may assist them in determining what is right versus wrong. Also, following the social norms and traditions of society can shape their decision making.

Since ethics are based on one’s moral standards, his or her beliefs regarding one’s religion, culture, or philosophy. These factors influence how one judges what is right versus wrong. A good way to keep one’s ethics in check is to be honest, open, and truthful, and do not do anything you would be ashamed of if it was televised. This type of behavior is based on the principle of personal virtues. 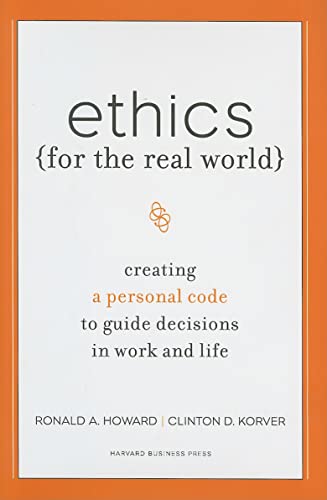 Ethics for the Real World: Creating a Personal Code to Guide Decisions in Work and Life
This book helps in developing a personal ethical code. It also presents a four-part section on becoming aware of ethical temptation and compromise, the fundamentals of ethical logic and using ethics as an avenue to a happier life.
Buy Now

Determining what is right versus what is wrong can be stressful and very difficult at times. Having a personal ethical foundation can guide a person through ethical dilemmas with ease. Again, the foundation of the ethics is one’s morals. Morality provides a moral compass, a sense of personal direction, and a guide to making choices in life based on one’s values and background.

Most parents raise their children to know right from wrong, but there are often children who are raised in a poor environment with no moral support. These individuals grow up not knowing right from wrong. This concept is not ingrained in their head like a normal person. Instead, individuals with poor backgrounds who are not raised with positive morals, must learn or be taught in school or through life experiences what is right versus what is wrong.

There are two main types of individual ethics. One is based on duties. Whether based on religion, philosophy, or social responsibility, the theory is that ethical standards conform to moral absolutes. The other system is based on outcomes. The most popular form of the outcomes or a consequences-based system is the Utilitarian point of view. In this case, the ends justify the means; the goal is to do the greatest good for the greatest number of people. This usually turns out to be a cost-benefit analysis that should be carefully analyzed by upper management.

Ethical behavior is based on cultural influences. Cultural influences, such as family, friends, education, religion, and the media affect one’s background. These influences create one’s values, shaping their ethical foundation. It is often important to find a role model who has a strong set of ethics. Watch how they handle sticky situations, and learn from their ethical behavior. Practicing to be like them in terms of their ethical values may take time, but the more you act in the ways you believe your role model would act, the easier it is to become a person with strong ethics and possibly a person that others look up to.

Social and Personal Ethics
This book offers you a sound introduction to ethical theory and issues engaging readings on many of today's most hotly debated topics. The book has 52 classic and contemporary articles as well as three case studies.
Buy Now

At the pre-conventional level of moral development, people make their decisions based on selfish reasons. There are two levels to this ethical style. The first is punishment and obedience, avoiding trouble for yourself. The second is the instrumental exchange state. This is where you worry less about punishment and more about doing things that directly advance your wants and needs.

Those at the conventional level of moral development make decisions that conform to societal expectations and norms. They look to others for guidance when it comes to ethical decisions. Ethical principles encourage managers and employees to take others’ interests into account when making ethical decisions. This makes answers to decisions more well-rounded.

Ethics are directly correlated with values. Values drive a person’s behavior, which in turn affects organizational behavior. Behavior is a series of reactions based on different stimuli, involving people and situations. Ethical values , such as compassion, love, and goodwill, are behaviors brought forth by cultural influences. The level of humility and affection one manifests are two results of these values.

When people share similar standards in a community, they build a cohesive value system. The terms morals and values are often used to mean the same thing – a set of personal principles by which one aims to live their life. When a person tries to formalize those principles into a code of behavior, they are actually adopting a value system.

The characteristics of humility and affection in relation to ethics can be seen in a variety of ways. For example, a person who has a strong character will be more likely to obtain encouragement one person offers another in the organization. It also can be seen in the way that an individual aligns his or her ethics with the organization’s mission. Organizational behavior is directly linked to the experiences and cultures of the employees in a company.

Employees with strong ethics are in high demand. Their conscious is cleaner. They are easy to trust, and they can easily build strong relationships with their supervisor, co-workers, and customers. They can be given more confidential work since the company truly trusts them. Their future is brighter, as they have a better chance at promotions, raises, or more important responsibilities.

How often are faced with an ethical dilemma?

How Ethical Are You?

There are many situations that arise that are shades of grey rather than black and white. It can be difficult to know right from wrong at times. Building yourself a framework to decide how to handle those sticky situations will help. Create a system that is tailored to your needs.

Example of an Ethical Framework

Who will this affect?

How will this affect others?

What are the pros of the situation?

How does this action help the company?

What can I do to handle difficult people?

What are the cons of this situation?

How would my role model handle this situation?

What values does this decision affect?

How can I illustrate ethical behavior to others?

Do I act ethically when no one else is around?

Are there more pros or cons in this decision?

Which option reflects best on the company?

What are the results of choosing this option?

How can I learn to be more ethical?

Who do I admire ethically?

A person’s personal ethical code not only affects his or her personal life, but it also creeps into one’s professional life. The ethics that are used in one’s professional life are created by one’s personal virtues, morals, beliefs, value system, and cultural influences. Having strong ethics helps with decision making and one’s growth in his or her moral development or ethical profile. 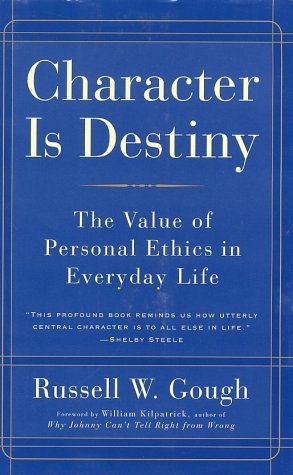 Character Is Destiny: The Value of Personal Ethics in Everyday Life
This books shows you how to overcome the most formidable obstacle to an ethical life: ourselves. Everyday we are faced with choices that enrich or impoverish our personal character. The choices we make in life and the manner in which we make them illuminate the paths out lives will take.
Buy Now