FOR WHOM THE BELLS TOLL?

Saint Peter is at the Gates of heaven and is checking his Book of Life, full with golden embroidery. We can tell that it's been looked upon for a while. by the worn out edges and the purple tapestry fading into grey.

Sor sister Margaret, a nun From South Africa is let herself in... right into the heraldic solace in Heaven. Next thing we hear this arrogant inside trader from Wall Street, who seems to have survived an accident...but with no apparent warning he left his worldly existence.His anger was notorious.

Saint Peter sees him approaching and tries to compose himself from a long talk with God.

"Mark Sir. Why? replies this inside trader from Wall St.

"My son, you are at the wrong place. This book of life doesn't have your name in it. Have you been behaving for real? Don't tell me you are a Lawyer, are you?"

"Wait a minute, I'm a Christian and I am the biggest giver... I gave money faithfully to my Church," replies Mark becoming angry. Suddenly these famous persons come from nowhere. Who are they?

"You miserable and despicable thing! Who the hell told you to use other people's money to make your boss rich?" answers this person holding the trader's neck up tight. "Who are you sir? why do you talk to me like that? Are you?..." Finally recognizes this person. "Oh my God! George Washington!!"

Behind this trader's shoulder comes steeping forward, Thomas Jefferson and This wise guy called Benjamin Franklin. Thomas and Benji hold him from his arms. While George looks in his pockets and finds no money but trading papers. "Where is the money? tell me right now!" screams George Washington. "We didn't found this country to become in painful debt, because of you people from this street by the Wall." adds energetically Thomas Jefferson.

Saint Gabriel comes over trying to break them apart, but Saint Peter stops him and keeps him at bay, even Saint Raphael who heard all this tumultuos ruckus, just looks from a few feet back. "I don't have any money, I gave it to my Church as I was told to do so!!"

"Listen guys, this is not a place for fights," intercedes Saint Peter. "Why don't you guys, have a talk and smooth things out."

Benjamin gets two dollars bill from his pockets. "He is nothing but a crook George. Look! even your picture looks so fake on this two dollar bill. Oh no correction, is your portrait Thomas. Never mind. But seems that you... looks like you posed for that portrait Artist in a bad mood."

"Wait a minute," says Thomas, as he finds another bill paper. "This twenty dollar bill 'guy' looks like me but is not me!".

The inside trader is about to cry. "Is Andrew Jackson sir, " responds the trader almost pissing in his pants. "So you think you are smart, huh!, and trying to make it to heaven so easily?" ask the three forefathers.

"Well, I thought I could sneak in... like in our quick high tradings, you know? I thought Peter wouldn't mind having some volatile bonds in the name of the Father. Amen!?"

Saint Michael comes with with his sword and shows it to him. "If this swords gets on fire, you go straight to hell. That was how I kicked Adam and Eve out. Just bear with me...!"

The trader looses himself from Benjamin and Thomas, and takes a deep breathe. "I told you, I gave faithfully money to my Church!"

"what church are you talking about son? ask Peter with a parental voice. "I forgot the name, why?"

"Certainly, this Pastor's name is shown in the flames of my sword dear amigo. He was trading your tithes at a foreign stock exchange and of course is in hell now, " replies Saint Peter.

Raphael steps up and fixes this trader's tie and break him away from the whole Crowd. "Come with me son," politely says Raphael. "Where are we going sir Ralphy?"

"You still don't get it son, do you? replies Saint Raphael. The flames showed us the real you and you will join that Pastor, right away! He was also a pedophile."

A few minute later two guys show up kind of lurking from behind the scenes.

"Oh God! you! Oops, I shoudn't have swore his name," remarks Saint Peter. "And this guy behind you?" 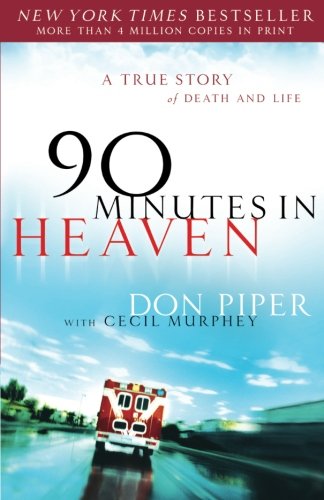 90 Minutes in Heaven: A True Story of Death and Life
Buy Now