The Art of Constructive Criticism: How to Give and Receive Feedback

After working all week on my pen and ink drawing, it was time for yet another class critique. As with every other design, painting, or drawing assignment, we set our finished projects up on display in the front of the classroom and took our seats. Often seeing each other’s artwork for the first time, we inevitably would scope out the competition to see how our own measured up.

Class critiques were not new to me. As a third year art student, I’d had my fair share of them. I knew from experience that falling short of the assignment, or turning in shoddy work would only result in public humiliation among my peers. If the work was good, however, the class critique was fairly painless. Even if the project was creative, beautiful or excellently executed, someone would inevitably point out something negative under the guise of constructive criticism.

For this class critique, I was not a bit concerned. Spending hours on the detailed pointillism, I knew my depiction of a little African girl would stand out among the others. Full of pride I placed my finished drawing in the front of the room. It was obvious that no one had put in the same amount of time and effort. Barely able to contain my confident smirk, I took my seat to await the sea of praise that was certain to follow.

That sea of praise, however, never came. Student after student stood up and pointed out the good and bad in everyone else’s drawings. Yet when each one would arrive at mine, they would pause, frown, and say something like, “Yeah, this is good… but there’s something wrong with that knee.” Or “I can tell she put a lot of work into this, but the knee is off. It ruins the whole thing.” And, “Yeah, that knee is really bad.” “The knee”, “The Knee”, “The Knee.”

The knee? I thought as I sat there willing myself to remain composed. What about the pointillism? No one else had taken the time use that technique. What about the details in the little girls beads or braids? What about capturing her tribal heritage and culture? What about her face and her hands, the fire and the pot? I was shocked as one by one they tore it to pieces.

Isn’t constructive criticism a contradiction in terms? Wouldn’t it be like saying, “here’s some positive disapproval” or “beneficial condemnation”? How can someone build me up while tearing me down? How was sitting through a critique like that anywhere near constructive?

Experiences with class critiques like the one above taught me to develop a thick skin. I was able to learn the ability to separate myself from my work. Through the years, I’ve gained a deeper understanding of the concept of constructive criticism.

Constructive criticism must always be given with the right motive. If the motivation isn’t to help me improve personally, professionally, or artistically, then there will naturally be nothing constructive about it. The class critique was supposed to be a learning exercise to help each artist realize areas that needed improvement. Instead, it often ended up being a time to tear everyone else down in hopes make their own work look better. Selfish motives have nothing to do with constructive criticism.

Constructive criticism must always be received with the right motivation. Do you really want to improve? Are you looking to learn, grow, and develop your skills? Is the project you are working on important enough to step away from and look at objectively? If your motivation isn’t constructive, then no amount of constructive criticism, no matter how well given, will ever be positively received.

With these motivations in mind, let’s take a look at some ways that we can put this concept into practice. 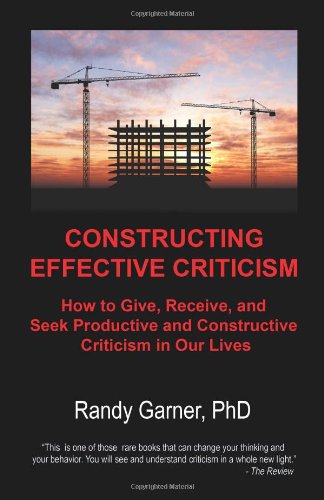 There really isn’t anything easy about constructive criticism. Both giving it and receiving it can be very difficult or painful experiences. Even if criticism is given in the most constructive manner possible, it can still be met with opposition and hurt. Putting these principles in practice in both the home and the workplace will only be steps in the right direction.

If you would like more information on giving and receiving criticism, I invite you to read my other hubs on the subject: Feedback: Stop Making Excuses or Blaming Others When Receiving Criticism and Feedback: How to Handle False Criticism at Work.

Constructive criticism takes a lot of practice. What experiences have you had? What has worked well for you in the past? What hasn’t? Perhaps we can all learn from each other. I’d love to read your comments on this subject.