The Idea Marketplace: Discover how to unlock ideas locked in your imagination to create abundance – meaning and money

Ben is scientist, teacher, researcher and author who loves to help you to be more, do more and achieve more. He is an Amazon kindle author 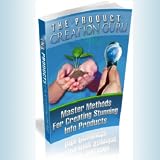 An idea is our visual reaction to something seen - in real life, in our memory, in our imagination, in our dreams." ~ Anna Held Audette from the book, The Blank Canvas

Take sometime now, and look around you. You must have realised that everything – articles or objects all around you were at on time an idea in ones mind. It was invisible at one time and over time through the creative ability given to man by God it was made visible. Even at this point in time you might have an idea concerning something. But any idea without practical action to its accomplishment or achievement is just a notion.

According to Earl Prevette, author and barrister:

An idea is an image formed in the mind. It is a mental picture of something seen, heard, or thought; the formation of a pattern by which something is developed or created.

From the above definition some words do stand out – image, mind, mental picture, and pattern, developed or created. On the whole the idea could be applied to immediate raw materials in our environment – data, things, or people.

Valuable ideas when developed and implemented to the service of man could be a source to great wealth. In his book Applied Psychology: Driving Power of Thought, Waren Hilton wrote the following about ideas:

As Mr. Waldo P. Warren says, "Who can measure the value of an idea? Starting as the bud of an acorn, it becomes at last a forest of mighty oaks; or beginning as a spark it consumes the rubbish of centuries.

"Ideas are as essential to progress as a hub to a wheel, for they form the center around which all things revolve. Ideas begin great enterprises, and the workers of all lands do their bidding. Ideas govern the governors, rule the rulers, and manage the managers of all nations and industries. Ideas are the motive power which turns the tireless wheels of toil. Ideas raise the ploughboy to president, and constitute the primal element of the success of men and nations. Ideas form the fire that lights the torch of progress, leading on the centuries. Ideas are the keys which open the storehouses of possibility. Ideas are the passports to the realms of great achievement. Ideas are the touch-buttons which connect the currents of energy with the wheels of history. Ideas determine the bounds, break the limits, move on the goal, and waken latent capacity to successive sunrises of better days."

Why am I writing this article? Well. I believe like me you have been in the time past or now in a position where you had a great idea, but do not know how to transform the intangible idea to a tangible form of material form. I want you to join me in this journey where we will explore the working of the human mind and the development of ideas through the organisation of specialist knowledge. By specialist knowledge I mean that knowledge you need to make your ideas a reality by organising it to a particular end – for example, the creation of riches or wealth. It is important to point out that riches are the material realisation of financial imagination. On the other hand, the wealth of the world is but the sum total of the contribution of the creative thoughts of the successful people of all ages. This creative ability is not limited to a particular individual or professions. Through training and exercising of your mental acuities you can learn to develop imagination faculties so as to reap the rewards thereof. Understanding the basic lessons in idea creation and idea selling is the key to unlocking your imagination. This work will guide of working with ideas intelligently to create abundance.

Players in the idea marketplace

Essentially, there are three players in the idea marketplace. They are the idea producers the idea distributors and the idea consumers. In the article “The Idea marketplace” the various players in the market place are grouped as follows. The ides producers (scientists, writers, inventors, Engineers and Politicians): The ides distributors (Schools, Television, Books, Religion, Individuals), and the idea consumers (All others)

There are two ways to become a player that can use his/her imagination for creating a fortune or to affect the life of others. One is to dream and be willing to take action on your dream and make it a reality. The other is to manifest the thought you have in your creative imagination, explore options and act to make them real by conscious creation of reality.

In this article the idea is to encourage you to become a person that is able to create and put your ideas into work. You have the tools and equipment you need to do this from birth. All you need is to become attentive and aware of it. Doing it however, is not instinctive; you have to invest in yourself to learn the skills. The ideas here could be the beginning for you.

Ideas are complex products of present sense-perceptions, past perception and mental processes known to psychology as association and discrimination. Basically, an idea is and image formed in the mind. It is a mental picture of something seen, heard, or thought; the formation of a pattern by which something is developed or created. In his book “How to turn your ability to cash”; Earl Prevette said,

“Everything you observe in nature is an idea of God, and is manifested in a plan”

This plan gives the idea a body expressed in forms, size and colour. If it were not so, it would be impossible to identify and clarify the different varieties and species as they appear in nature. This is the basic reason as to why all ideas to influence people or create things must have a plan.

According to Napoleon Hill, an idea is an impulse of thought that impels action, by an appeal to imagination.

The Imagination in a nutshell

“Imagination is more important than intelligence.”

Man virtue of his Divine connectedness has inherited certain abilities that will help him to create and to build. Being aware of this potential is one thing but our ability to exercise this natural endowment is most of the time ignored, left be dormant and therefore not harnessed. For example, through the faculty of imagination one may arrange old concepts, ideas, or plans into new combinations. The faculty of the imagination will on its own be able to create anything, but, relies on its ability to work alongside materials of experience, education, and observation. It is the faculty used by most inventors as they make use of creative imagination when he can not solve his problems through constructive or synthetic imagination. Imagination is both interpretative and creative. Imagination is the ability is the ability to see the unseen before it happens. It is the ability to imagine possible discoveries before they take place. It is the ability to design the experiment that has never before been designed because the means to do it has never been invented or discovered until now. Imagination also attempts to assess scenarios before they exist. For the imagination to work there is the need for a lot of current information plus an ability and passion to imagine non- existent information and scenario in order to tell if the expert may be out of date or wrong. Imagination requires good dose of divergent thinking. Imagination can give us practice in the ability to hold a variety of different and conflicting notions in our mind simultaneously.

The story of Clarence Saunders who organised the Piggly – Wiggly system of self – help grocery stores is very interesting, since it will help us to have a snap preview of the power of the creative imagination to create our reality. It is a positive illustration the power of the imagination in modern business achievement as narrated by Napoleon Hill in his 1928 account of “Law of Success”. It will perhaps help you to tease out the threads that hold s the robes of the art of the imagination, which enabled Saunders a grocery clerk in a small Southern retail store to rise to greatness. There was nothing exceptional about Saunders to make anyone take particular notice of him; except, that he earning about $200.00 per week in job.

One day he was standing in line, with tin tray in his hands, waiting his turn to be served food in a cafeteria. But what happened as he was waiting for his turn for the meals, changes his life. It appears that something took place in his mind as he stood in the line waiting for people – that put his imagination to work. With the aid of his imagination he lifted the idea for “self help” grocery stores out of the “self help” cafeteria. Essentially, it was not creating anything new, but merely shifting an old idea into a new use and set it down in a grocery store.

If you critically review the principle here you will see that there was nothing extraordinary about what Saunders did. What was clear is that he changed his reality and therefore his experience. He changed his thinking and his belief changed automatically. Is there in this story any performance that you could not duplicate? Remember all that is needed for the transformation of intangible impulse DESIRE into tangible reality of MONEY calls for the use of plan or plans. These plans must be formed with the aid of the IMAGINATION, and mainly with the synthetic faculty – constructive imagination.

This is what Clarence Saunders and all the great leaders in human history that moved civilisation forward. Most of the artefact of civilisation – the riches and wealth are the products of the creative imagination being fashioned via diverse knowledge base.

In this example of the power of the imagination to create, Clarence Saunders created a definite purpose. He supported this purpose with sufficient self –confidence which gave him the initiative to transform it to reality. His imagination was the workshop in which three factors, definite purpose, self –confidence and initiative were brought together and made to supply the momentum and framework for the first step in the organisation of the Piggly – Wiggly plan; which changed great ideas to realities

Some hubs related to topic