To Protect and Serve: How to Be a Police Officer

Contrary to popular belief, to be a police officer does not mean constant shooting at evildoers. In fact, according to a report by the U.S. Department of Justice, only one half of one percent of officers ever use force in calls for service.But the job can be stressful and dangerous because officers must confront criminals and deal with threatening situations. The U.S. Bureau of Labor Statistics states that police have “one of the highest rates of on-the-job injury and illness” with a career that may “take a toll on their private lives.”

Still, to be a police officer means receiving one of the highest salaries available to high school graduates and gaining emotional satisfaction from helping people in need. Over 600,000 serve as patrol officers throughout the country, with over 100,000 in supervisory positions.

Teens who want to be a police officer can start with explorer posts that are available through many police departments. They learn leadership skills, law enforcement procedures and marksmanship. Their primary duties include participating in ride-alongs with officers, helping with community events, working at information desks and assisting with checkpoints. They must typically be at least 14 years old, have no physical limitations preventing duty completion, have no felony convictions and be of good moral character.

Adults who want to be a police officer must also be free of felony convictions and in many cases, no misdemeanor convictions for domestic violence. Most departments also require a high school diploma, though some mandate some college work or a degree. Many junior colleges and universities offer degrees in law enforcement or justice. Physical strength and stamina from sports participation, and knowledge of a foreign language are pluses.

A visit to the department website is the first step to be a police officer. Though actual procedures vary by location, most police forces require passing physical abilities tests, undergoing psychological and medical evaluation, completing a background investigation and polygraph exam, and going through an oral interview. Departments in major urban areas may offer positions right away to successful applications. In smaller jurisdictions, applicants may have to wait a year or so before they are actually hired.

Recruits must go through 12 to 14 weeks of training at the agency’s police academy. While large departments have their own schools, smaller ones may send recruits to regional or state centers. Training covers such classroom topics as constitutional law, local ordinances, accident investigation and civil rights. It also provides practical experience with the use of firearms, self-defense, first aid and police procedures.

After graduation, recruits go through a probationary period that may range from 6 months and 3 years. They typically partner up with more experienced officers to gain the practical knowledge necessary to be a police officer. They may remain in patrol positions throughout their career. They can also seek promotion to higher ranks, such as detective or captain, by passing the appropriate exam and applying to an existing opening.

For the salary to be a police officer, please see Protecting the Public: Police Officer Salary in the USA. 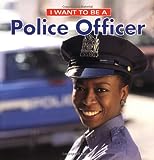 I Want to Be a Police Officer
Buy Now