Sustainability and Green Business in Fort Worth, Texas

Fort Worth, Texas has been recognized ever since 2008 by Forbes.com and other publications as among the Top 10 Best Cities for Jobs in America.

The city supports several major employers, including Fortune 500 firms, and is the 5th largest city in the State of Texas. As part of the Greater Dallas - Fort-Worth - Arlington Metroplex, Fort Worth is the 17th largest city in America with a population of over 700,000 during Census2010.

During the Great Recession of 2008-2010, the unemployment rate here remained under that of the nation and in February 2009, remained over 2 points lower than the national rate, This indicated job openings continuing to increase as the population increased, validated by the graphics from major job search aggregators presented below.

The city was founded before the Civil War, in 1849, as a US Army outpost overlooking the nearby Trinity River.Many National Historic Sites are located here. Today, Fort Worth is home to a huge federal contractor specializing in Information Security and Information Warfare.

Forth Worth Sustainability is Increasing Overall

Green Progress in Fort Worth

In 19th Century Northern Texas, the the US Army protected the settlers around what became fort Worth against Mexican armies, while the majority of Native Americans moved out, away from the fray in the mid 1830s.

The US and Texas won the Mexican-American War in 1848. By the mid 1870s, the railroads had come through and Fort Worth became a commercial and livestock shipping city. Saloons and gambling emerged as entertainment venues.

In 1900, the town picked up a population that made the city 12% African American and changes came about. Blacks lived in the southern part of the city, found jobs and bought homes, but some worked in the saloons. This area of town, the saloon and dance hall district, had been named Hell's Half Acre and entertained the numerous cowhands and cattle drive bosses coming through on the Chisholm Trail.

The district houses of vice were all closed in the early 1900s, but the city itself picked up drifters and prostitutes in the Near South Side. That area today is a focus of continuing revitalization plans and major accomplishments in the 2000s (see New Businesses and Expansions, below). 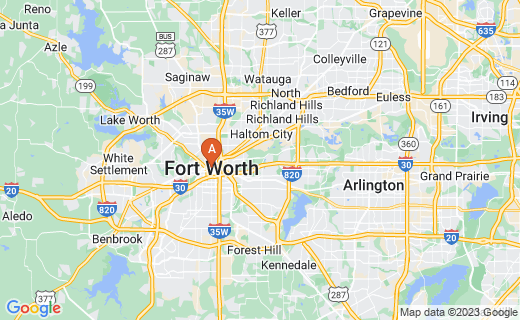 During March 2014 the organization called WalletHub found that Fort Worth, Arlington, and Dallas Texas are all in the American Top Five Best Cities to Find a Job.

Indeed.Com is the major American Internet job board that includes the features of an application for tracking industry and job growth trends defined by number of openings listed on the board. For a radius of 25 miles around the center of Fort Worth, Medical and Healthcare Industry jobs are on a steeper increasing curve than jobs in general, with Information Technology jobs increasing at near the same pace.

Manufacturing (livestock and meat processing being major, along with aerospace manufacturing a targeted growth sector) has fluctuated over the same time span, but began increasing more strongly from July 2008 - Feb. 2009. Education has experienced the steepest increases in job listings.

Life Sciences and Logistics/Transportation are also targeted industries under advanced development in Fort Worth and Tarrant County.

Texas has received $34,700,000 for Adult Employment and Training, along with $82,000,000 for youth jobs up top age 24. The Fort Worth will be benefiting from a large portion of those funds. Laid off and otherwise dislocated workers are seeing $58 Million coming into the state for them. Older Workers are benefiting from $1.2 Million. Plus, $219,000,000 is allocated for child care.

Thirteen(13) major projects under the Stimulus Package in Fort Worth created additional new jobs through 2014.

Top 10 Hot Jobs In Fort Worth

USAF Jobs In Fort Worth

Fort Worth of Yesteryear