Expansion in the Alaskan Panhandle

An earthquake shook Anchorage in the central range of the Alaskan Gulf in mid-June 2011, but Ketchikan, named after an important local creek, is on the Southeast side of the state, reaching down toward the Queen Charlotte Islands of British Columbia.

The creek is part of the Historic Creek Street District downtown and is on a two-hour walking tour of the city. A bridge across the creek takes visitors past the dance hall and former brothels of the early Alaskan lumber and fishing settlement years and offers entertaining stories from guides.

A part of the Alaskan Panhandle and the American part of the Inside Passage used by early European explorers and later shipping companies, Ketchikan is the southernmost city of sizable population in Alaska.

This city has been called the Salmon Capital of the World.

In addition to this distinction, Totem Heritage Park was chosen by readers' votes in 2009 at StoodThere.com as the a "Greatest Place to Stand in America" to take pictures, particularly selfies.

Ketchikan is home to two other carved pole collections/installations, including Saxman Village and Totem Bight State Park. Carved poles can also be found in Sitka and a few other spots in this sector of Alaska, altogether being fairly close to the Queen Charlotte Islands and the rest of British Columbia in which poles carved from red cedar are prominent in history and current arts and culture.

Yellow cedar and other woods have been carved as well, but red cedar is the traditional favorite. The Indigenous North American Peoples - First Nations and and Native Americans that have led the pole carving tradition in this area have been the Haida, Tlingit, and Tsimshian in America and BC, Kwakiutl in BC, and some other groups.

One of the most famous cedar pole master carvers in history, Mungo Martin, was Kwakiutl and his wife, a Tlingit -- he combined power animals, or "totems" as we call them, of both Kwakiutl and Tlingit cultures in some single poles. He also carved replicas of Haida poles in his special position with the University of Vancouver and its Department of Anthropology. Martin combined the crests or totems of four nations in a single pole for an installation in Victoria BC as well.

Some poles reside in Washington State and a few in Oregon. Most of the rest standing in the USA were commissioned from native and non-native carvers for art installations, campgrounds, museums, and amusement parks.

Cedar poles have been commissioned from British Columbia's Indigenous master carvers for nations as far away as the UK and other destinations. Indigenous poles of earlier histories than the Pacific Northwest, in the Old World, have been carved by Indigenous Peoples in Amur, Japan, New Zealand, Korea, Polynesia, and elsewhere.

Tongass Historical Museum and Ketchikan Totem Heritage Center are approximately 2,000 feet from each another east-to-west in the central part of the city. The museum is lodged within the First Cities Public Library and expects to take over the entire property for a new, large museum complex during ongoing development.

Several sources call the collection of carved poles at the Totem Heritage Center the largest worldwide in a single spot.

Some native cemeteries that include carved poles may, in fact, have a larger number than does Heritage - one perhaps in Alert Bay in the Queen Charlotte Islands, but Heritage's is very large.

Vancouver BC also has a large installation of carved poles. Overall, those in the Alaskan collection are older, 19th century poles that were recovered from abandoned villages by the state and federal governments for preservation in the early part of the 20th century and would have decayed without such preservation.

Other poles (replicas) were carved by native peoples in the Civilian Conservation Corps under WPA programs of the Depression Era udner the Franklin D. Roosevelt administration. This was a thoughtful addition to the development of American national parks that also created jobs.

A number of guided tours are available to the three carved pole collections in Ketchikan and those at the Heritage Center and Saxman Village may be combined with wildlife tours featuring local native animals and plants.

Bald Eagles are often sighted in the panhandle. Downtown Ketchikan near the library and Creek Street are both a Salmon Run and a Native Alaskan operated Eagle Center where both aerial and water wildlife thrive. The salmon run to spawn can be seen from June through September. 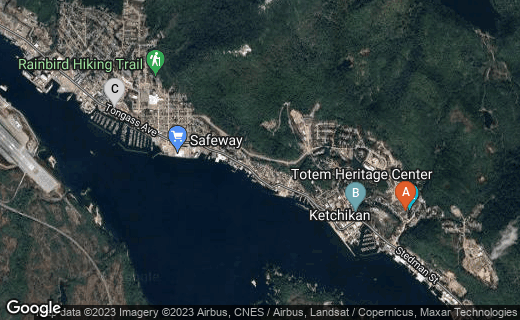 Tourism is a major contributor to the local economy, especially since so many visitors travel to Alaska for photography carved cedar poles, on whale watching tours, and in on trips in the Inside Passage.

In 2013, publicity and events surrounding official openings of new indigenous museums and historic sites were akin to those when the Smithsonian Institution Museum of the American Indian opened in 2005.

I think that a festival of Pacific Northwest and Alaskan cultures is becoming more popular in this part of Alaska, as well as neighboring British Columbia, complete with master carving demonstrations and other native arts, all of which will further increase interest in the indigenous peoples of this area and their businesses.

All this will expand the usual tourist enterprises like hotels, tours, dining places, retail sales and other cultural events. Native cultures in the Pacific Northwest are receiving not only increased attention, but also increased support in their business pursuits, along with more visitors.

Travel Nurses and other travel-healthcare professions are needed in the City of Ketchikan and its borough or county of Ketchikan Gateway, including 15,000 residents.

Most-needed workers are licensed RNs and LPNS, Physical and Occupational Therapists, and even Physicians. The interesting thing about "traveling" is the extra perks and benefits it offers: