Tips for Giving Your Speech or Talk

Lynne Modranski is a worship leader as well as an author and teacher. She's written several Bible Study guides and Children's lessons.

How to Use a Microphone

If you're asked to speak, even just a sentence or an introduction, it's important that you understand the basics of using a microphone. It's incredibly important that you be heard, so do your best to follow the instructions below. Your audience will thank you!You may be thinking, "Don't you just talk into a microphone?." Yes, you are correct, you do. However, there are some things most people don't realize about sound systems, and if you learn them, your sound technician will be grateful.

You DO Need a Microphone

Yes, no matter how loud you think you talk!

I don't care how well you project or how loud you think you are, if you are in a room with more than 40 people or a large room with people spread out, use a microphone. At nearly every singing or speaking engagement in which I'm asked to participate, if there are more than three presenters, at least one person will believe he or she is loud enough without a microphone. When the emcee tries to hand it to him, hook him up wirelessly or asks that he stand behind the podium, this speaker confidently assures the organizer no amplification is needed, and then only the 10 people in the front and those on the stage hear him. Worse than that, if the event is being recorded, this speaker's time slot is now an empty spot on the CD.

I project well. I was raised on a farm out in the country. I learned to call in cows from the field at a very young age. As you might guess, I can generally be heard in most small to moderate sized venues without any amplification. However, if I'm offered a mic, I always take it. First of all, I think it looks pretty arrogant for me not to. Second, if I am too loud there should be someone running the sound board who can turn it down. I only opt out of the mic if the venue doesn't know what they are doing and it squeals or hums AFTER I try it.If you've been asked to speak, then what you have to say must be important. And if it's important, make sure those listening can hear it! Please, use the microphone.

A Microphone only Amplifies

A microphone only amplifies what is spoken into it. So, if you are very soft spoken, you're voice will sound like a loud whisper instead of a soft whisper. Even when using an excellent mic system, you'll still need to project to be heard. Don't be afraid that you may be talking too loud. If the place you're speaking is worth a grain of salt, they'll have someone at the controls to turn you down if you happen to get too loud. Believe me, it's a lot easier for the folks in charge of sound to turn you down than turn you up. The squeals that you hear from most sound systems are caused more often by a soft spoken speaker than someone who is loud or a faulty sound system.

You control the microphone

This brings me to my third point. If you really want to help out the sound tech, talk INTO the microphone. Most mics that are used for public speaking are meant to be held between three and six inches from your mouth, NOT at your chest or lower and not all the way on the other side of the podium. If the microphone you're using is on a stand, adjust it before you begin. Don't feel awkward about doing it, just do it. If you're not sure how, ask the sound person to show you before the event begins or ask him to do it for you before you get up to speak. I'm quite short, so it's almost inevitable that I'll need to lower the microphone before I begin. You'll want to try to adjust it with the least amount of noise as possible, but again, if the sound technicians are adequate, they'll hit the mute button for you until you're ready. If you hear a squeal out of the system when you're speaking, don't back off the mic, get closer and/or speak up. There's a good chance they can't hear you and the sound tech is attempting to bring up the volume.

The quality of your sound system and microphone will make a difference. I use a microphone so often that I actually take my own with me even when I'm not using my own sound system.I only use Shure microphones. There are probably more expensive mics that work better, but I've tried a number of less expensive brands and never had any success with any of them. 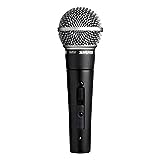 Shure SM58 Handheld Dynamic Vocal Microphone with On/Off Switch
This is not a new model of Microphone, but it's still one of the most effective for the money. I've been using Shure 58's for almost 30 years. We used them in a band I played in for the first ten, and a few of those are still working after all that time. This is my favorite corded mic.
Buy Now

Shure PG30-TQG Cardioid Condenser Headset Microphone with TA4F Connector
I'm a guitar/pianist, so a headset is a must. I used to drive my husband crazy when all I had was a handheld. When I switched instruments, he'd lose me in the speakers. With the headset, I can move from one instrument to the other smoothly. Plus, when I'm playing, I sometimes move around a little, so I had to really concentrate on staying where I needed to be with the mic. The headset stays right there at my mouth, so it's one less distraction when I'm singing. The Shure headsets have never let me down.
Buy Now

What if I get a Bad Sound System?

Finally, if you happen to be forced to use a gymnasium, hotel or "resort" sound system, go ahead and follow the rules above, but understand that there's a really good chance the microphone quality will be substandard, it won't be EQ'd correctly and no one will be adjusting levels. The system will most likely squeal. It's just a fact of life. But, don't let that fact scare you or keep you from following good microphone use rules. You deserve to be heard, and your audience deserves to hear what you have to say.

Do You Get Nervous When You Talk? - What to Do if You Talk to Fast

I was recently looking for a place to find out the approximate number of words per minute we speak. I check this so when I'm writing something I have to share, I can estimate how long it will take (Which, by the way, is 150-160 words per minute - then I add 5 minutes for every 15 for my ad libs). But, when searching I found this excellent article with tips on slowing down and handling nervousness. I highly recommend it if you are uncomfortable talking in front of others.

Lynne Speaks from time to time

I tend to talk fast. Many times, I have to use tricks and tips to help me keep my pace at an understandable level. I use a headset mic because I sing most of the time and hold a guitar. I tend to move around a lot. These two videos will give you an idea of how I use the mic to get my point across.

How often do you have to use a Microphone