A lot of Orthodox men wear suits and ties to shul (Yiddish for synagogue; it's Esnoga in Ladino and Beit K'nesset in Hebrew) on Shabbat (the Sabbath).

When I was creating designs for Zazzle, and I discovered that Zazzle had neck ties (which thrilled me because a large percentage of my products are for women and having a product I could design for men excited me), two different friends, who lived in and had lived in a total of 4 different Jewish communities at that point, told me that they knew several men who would wear ties that tied in to the weekly Tora portion (called Parsha in Hebrew). So I decided to begin designing ties for different Tora portions. (These are sections of the Tora, the 5 Books of Moses from the Jewish Bible -- also knows as the "Old Testament" -- that are read in the synagogue on Shabbat morning with a "preview" of the next week's Parsha being read on Shabbat afternoon, Monday morning and Thursday morning in a cycle Beginning from Simhat Tora each year.)

This design is for the Parsha of B'Reishit (Genesis). It shows the sun and the moon and the stars, which were among G-d's first creations "In the Beginning".

The Noah tie shows the ark with three pairs of animals on the deck -- a cow and a bull, a pair of penguins and a pair of Dodos.
Click on the picture to see the entire Parsha tie collection on Zazzle.

The VaYeira tie shows the three angels (disguised as men) coming to Avraham (Abraham) and Sara to tell them they will soon be parents.

The Tamar tie shows a pregnant Tamar with the proof that the babies she is carrying are Yehuda's (Judah's) children. When he realizes that he is the father, he says that she is more righteous than he is.

Yoseph Interprets the Butler and the Baker's Dreams

This tie shows Yoseph (Joseph) interpreting the dreams of Pharaoh's Butler and Baker, who were thrown into the prison Yoseph was in charge of.

This tie shows a rendition of Pharaoh's dream where 7 sick cows eat 7 healthy cows. Yoseph interpreted this dream to mean there would be 7 years of plenty and 7 years of famine. He was proven to be correct in his interpretation.

Yaakov Blesses his Sons on the image of this tie. Yaakov gathered his sons by his bedside as he lay dying and blessed each one.

The Shmot tie shows a Pharaoh's daughter (sometimes called Batya by the commentaries) reaching out to save the infant Moshe (Moses) when he was floating down the Nile in a basket.

The Bo tie shows the last 4 of the 10 plagues -- (fiery) Hail, Locust, Darkness, and the plague of the [killing of] the First Born.

The B'Shalah tie shows the men praying to G-d and thanking G-d after the splitting of the Red Sea after the Exodus from Egypt.

The Parsha of Yitro (named after Jethro, the father-in-law of Moses) talks about G-d giving the Tora to the Children of Israel.

Because Mishpatim is the Hebrew word for "Laws" (and Mishpatim is about civil laws as opposed to religious laws), I decided that a gavel would be appropriate for this Parsha.

Haftora Tie of the Jerusalem Skyline

Study the Parshiot (Tora Portions) with these books from Amazon 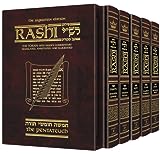 Spoonflower is a place where a designer can design his/her own fabric. I have some designs on fabric there -- click on the picture to see all the fabric designs.

Spoonflower also has a weekly contest where you can vote for your favorite design.