The beginning of the Roaring Twenties began as a time of recession. The soldiers from WWI where coming home, which sent the first year into a wartime recession. However in no time at all the decade would be on its way to bigger, and better things. As the automobile industry grew, so did the city's population. Work could soon be found in industrial lines, consumer goods, and automobile assembly. It seemed as if the decade would flourish with economic growth. However those of small towns would mock the era, calling it the fad era. The people had reason to celebrate, on there new era, and with all their new dance clubs, there was plenty of places to do such. Some would say the era of the roaring twenties, was of on the right foot.

The economy of the roaring twenties, was ethnically rich, diverse, with rapid improvement. With natural resources found, in the heart of America. They were able to get oil from Texas, and coal from the Appalachian Mountains. There was even ranching, in the Midwest, and Great Plains, reign. America truly had no reason, to go else where for resources. Do the fact, that they were all found right here, already. America, had once been the place where country’s would turn for natural resources. We had once made, metal, explosives, manufacturing, plastics, and chemicals. Which country’s like Britain, France, and Europe, had once purchased.

Republicans had emphasized the role, in having a free market. They were firm in believing, that in order for America to flourish, they most honor basic principle. These principles where:

These key factors, stayed with the Republican Party, throughout the roaring twenties. Which made them a successful, society.

That type of society, paved a road to allow women, to truly enjoy the roaring twenties. Through political equality, that allowed women to become a new generation . Starting in 1920, with the 19th Amendment to the Constitution. Which allowed women, the right to vote. This excited, and encouraged women, to stay with the workforce. Which they had been temporarily, introduced to during WWI. Although feminists, commonly believed that the responsibilities, of taking care of the family, and working, believing that one would devalue the other.
The roaring twenties, is most often portrayed as a flapper. They imagine a women, wearing a shorter than average, shapeless shift dress. The exposure of arms, and legs, with short slick hair, and holding a long cigarette holder. However this is actually not accurate of everyday fashion, although it is very common in a dance trend that occurred during 1926-1928. While the true history of that fashion era, might sound less flattering, it is more proper.

In post-war era, women had attended segregated female, colleges. In hopes, of preparing the female role, for marrying and starting a family. The courses that being offered to women was home economics, husband and wife, motherhood, and the family as an economic unit. After the war, the college role had changed, allowing women to finally attend co-ed colleges, and universes. Before 1926, the dress, and coat lengths were actually calf length. While between 1926-1928 they would briefly be seen at knee-length. Prior to 1926 ,makeup was only for lady's of the night. Although during 1926, more women wore makeup, and even, started to apply it in public. The fashion style of the roaring twenties, would later be known as the costume history. 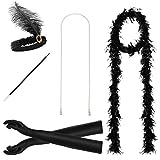 The roaring twenties, was a time of celebration, dance and music. Jazz had become the music of the time, and were often played in dance halls, in urban cities. Some of the famous jazz musicians were: Sidney Bechet, Louis Armstrong, Bing Crosby, and Jelly Roll Morton, just to name a few.
The roaring twenties, brought forth a musical rage that soared through the middle of the decade, and into the next . The music had taken its first revolution, with country, classical pieces, operettas, folk, and jazz, which transformed into the popular dance craze.
The roaring twenties, was the beginning of country music, and with it came forth great country singers like: Jimmie Rodgers, Uncle Dave Macon, Vernon Dalhart, Charlie Poole, along with many others. With these great musicians, the pioneering of the Grand Ole Opry, had given birth..
Jazz was getting remastered, into pop culture as dance music. This sent the 1920s into full swing with the following popular dances : Foxtrot, Waltz, American Tango, Lindy Hop, Black Bottom, swing, Tap Dance, as well as dance contests. All of which would become enormously popular, inside the dance clubs, of the era.

On January 16, 1920, the 18th amendment of the constitution had been into place. Which prohibited the sales of alcohol, although it was still being served in speakeasy. But just like any other amendment, there was a loop-hole in its system. Which allowed alcohol beverages could be sold, and drank, on ships 3 miles from the border.

Although WWI produced the first airplane for infantry. The airplane, became capable of flying longer distances in the 1920s. Some say, that the roaring twenties would bring forth, the birth of aviation. This would be proven, in 1927 by Charles Lindbergh. Who had flown a solo non-stop flight across the Atlantic Ocean.
It was 20-May 1927, that Charles Lindbergh would leave the ground in New York. The plane had a single-engine design, pacifically created for Charles solo flight. This would become the first time in history that anyone flew over the Atlantic Ocean. Charles finally landed the plane 33 hours later, in Paris France, where he was warming welcomed by the President of France.
Charles Lindbergh, had received the French Legion of Honor. Upon Charles, arrival back to the United States, a fleet of warships, as well as aircraft,where there to greet him . That would escort him to Washington D.C. , where he received the Distinguished Flying Cross.

During the roaring twenties, there was two authors known as Earnest Hemingway, and Gertrude Stein. Both Earnest, and Gertrude, had written about the lost generation, who had come to age during and after WWI. This would be the people, that were born between the years of 1883, to 1900. Although, Earnest, and Gertrude, was not so much writing about a generation being lost, as in confused, but as in being battered.
Although different variations of the term, are used throughout the world. In America it is referring to the time frame between the end of WWI, through the beginning of the great depression. In Europe, they are mainly acknowledged as the generation of 1914. In France, they where occasionally known as the generation in flames. The Britain term, was originally used for those who died in the war , and often referred to those of upper class states, who were perceived to have died. They often stated that the country had been robbed of the future elite, and that the best of the nation had died.

The beginning of the decade brought forth silent, colorless films. That were accompanied by musicians on piano, organ, or other musical instruments. These where often shown in Nickelodeons, which were the very first basic movie theater. The nickelodeons where the place to be, it gave the audience an exciting imaginative world. Where dreams where possible, and life was something beyond this world.
Although the decade had started out, with black and white reels, that consisted of no sound. It would not stay that way for long. For in 1922, the film The Toll of the Sea, released the first color film. A year later in 1923, the first film would be commercially distributed, and keep a synchronized soundtrack. By the time the era, was over there would be colored reels, that contained sound, and music.
Walt Disney was just coming to the seen in the 1920s, and it would prove to become a very, very busy decade for Walt Disney. The Disney company started showing Alice Comedies in 1923, which would later be the founding point for The Disney Brothers Studio. In 1927, Disney released Oswald the Lucky Rabbit cartoon. But although that was one of the biggest stepping points of his career, the audience would say different a year later. For in 1928, Disney released Steamboat Willie, with the first showing of Mickey Mouse.