5 Underrated Cryptids That Might Be Lurking in Your Back Yard, Part 1 of 5

Bigfoot has transcended his status as a fringe subject and is now a permanent fixture of worldwide popular culture. Anyone with even a passing interest in the paranormal will also be familiar with the Chupacabra, Mothman, and the Jersey Devil, thanks to their frequent mention in horror movies and monster-hunting TV shows. But what about the underdogs that don't have what it takes to be a superstar? Are they any less unsettling? Certainly not to those who claim to have encountered them up close and personal. Their stories may be relatively unknown outside certain parts of the US, but these local celebrities are as talented as any big-name cryptid when it comes to terrifying those who have seen them first-hand. And you don't have to travel to some exotic location to see them—many have been sighted in multiple states and across entire regions. Your chances of running into one in the dead of night may be higher than you think.

The most famous “proof” of the Dogman's existence is the Gable Film, an admitted hoax (though an elaborate and convincing one). Combine this with the fact that he owes much of his infamy to a song written in 1987 for an April Fool's joke, and this wolf-among-us comes out looking a little sheepish. But to be fair, the song is based on real reports of the creature. And in an eerie coincidence, the first recorded sighting of the Dogman took place exactly a hundred years before the song was written, in 1887. The decades between are filled with many more sightings. Dogman lore claims that they only occur in years ending in 7, but that's not the case in reality. Still, there is clearly something going on here beyond pranksters in Ghillie suits.

The story goes that in the spring of 1987, a disc jockey with an interest in folklore decided to write the ballad as a joke. He took reports of skin-crawling encounters with other cryptids from across the country and combined them with local legends into the tale of the Dogman, a bipedal beast that roams the woods of northern Michigan. The song describes a creature resembling a werewolf: it has the overall shape of a massive canine—thick fur, tail, pointed ears, sharp fangs and claws—but stands on its hind legs like a man and emits horrifying screams if provoked. It stalks the forest at night, terrorizes loggers, farmers, and campers, and leaves deep claw marks on church doors...seven feet off the ground. The jockey aired his song on April Fool's Day and thought nothing more of it, probably thinking the subject was too outrageous to be taken seriously by anyone.

But then something strange happened. Calls started coming in from people claiming to have had terrifying encounters with the same beast described in the lyrics. The ballad's creator had unwittingly tapped into something powerful in the local collective subconscious. Was it all a case of suggestion and mass hysteria? Or was there really a werewolf prowling the chilly northern woods? 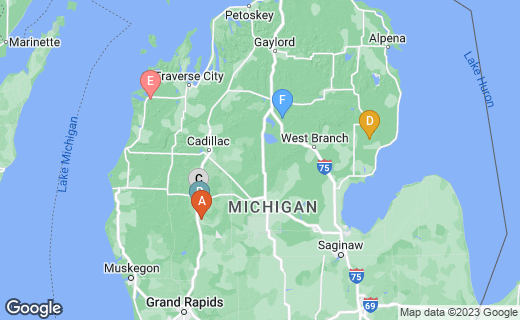 The first recorded sighting was in 1887, near Big Rapids, Michigan. Some apparently very bored men were chasing what they thought was a dog. It was all fun and games until the annoyed animal stood on its hind legs and screamed at them like a person. The men fled the area and never returned.

In 1938, along the banks of the Muskegon River near Paris, Michigan, a young man fired his shotgun at a pack of five wild dogs that had attacked him. He killed one, and most of the others ran off in fear, but one didn't. It stood up on two legs, turned its black-furred head to face him, and glared. Perhaps it was just a bear with strange taste in friends...but its eyes were described as yellow and slanted, a characteristic that sounds much more wolflike than bearlike.

In 1993, a young teenager was in her back yard near Reed City, Michigan when she saw a glint of light, six feet off the ground, coming through the planks of a nearby tumbledown barn. When she realized it was the glowing eyes of a creature with the head of a dog and the height of a man watching her through the gap in the planks, she quickly left the scene. A neighbor claimed to have seen a dog that was “buffalo-sized” lurking in the barn.

In 1999, an outdoorsman was camping along the Ausable River in Iosco County, Michigan. The day was going fine until an hour before dusk, when he heard a "deep and almost humanlike" wolf howl. With the sun going down, he decided to set up camp and build a large, comforting fire. As the sky darkened he heard the howl again, closer, directly across the river from his camp. He ate some dinner and uneasily settled down for the night, clutching his trusty hunting knife. The usual sounds of wildlife stopped completely, and an unnatural silence descended on the river. He noticed a huge creature on the bank across the river from him, taller than a bear but distinctly canine in appearance, with a long wolflike muzzle, shining yellow eyes, and dark fur. The beast howled again and then ran off--on two legs. The next morning, the camper examined the tracks on the other side of the riverbank and found them to be very wolflike, but made by a bipedal animal.

In 2007, a man had a roadside encounter with the Dogman outside Bendon, Michigan. Driving home late at night, he saw an animal on the side of the road. Thinking it was a deer, and not wanting to collide with it, he began to slow his vehicle down. But as he approached, he saw that the animal wasn't deerlike at all, and in fact resembled a large bipedal wolf. It looked to be about six feet tall and was covered in dark fur. The incident seemed so unreal to the witness, as his car inched closer to the upright wolflike creature and it still did not move a muscle, that he thought it must have been a taxidermied fabrication put there as a practical joke. Before he could complete the thought, the creature dropped to all fours and darted across the road, out of sight.

In 2011, two friends were deep in the woods near Roscommon, Michigan, hunting deer. As evening turned into night, they encountered a few deer but could never get a good shot. Finally they decided to head back, frustrated that they hadn't bagged anything. As they packed their gear, they heard rustling in the bushes. Their flashlight revealed two glowing red eyes watching them from the foliage. Aiming the beam of the flashlight down to see the rest of the creature, they saw only "a massive dog's foot" poking out from the undergrowth. Panicking, they ran for their truck and turned on the headlights, which revealed the entire beast--a dog that stood seven feet tall on its hind legs.

The Dogman isn't limited to Michigan, either. It's been sighted frequently in Wisconsin (as the Beast of Bray Road), and a large, wolf-like creature known as the Shunka Warakin (meaning “carries off dogs”) once prowled the entire Upper Midwest. The Waheela, a similar wolf-beast, is said to roam across Canada and the northern United States. But even if your back yard borders on Dogman territory, there's not necessarily any need to worry. The Dogman appears to be a relatively benign entity. Most encounters involve the witness being simply watched, and the Dogman only retaliates if he is bothered first. There are apocryphal tales of Dogman-related deaths, but even then, the victims are supposed to have died of fright. And the creature wasn't actually spotted at the scene--only large dog or wolf tracks.

How does the Dogman stack up?