A Case For Religion In The Founding of America - Part 1

The Faiths of the Founding Fathers
Buy Now

In the seventeenth century, North America saw the beginnings of the United States when Europeans fleeing their homelands in search of religious freedom began to form what would become the British colonies. The colonists urged their leaders to form a religious haven for them that would prove that God's plan for His church in the new American experiment was real and valid. The extent of this religious fervor is not far removed from the Islamic idea of Sharia Law, where religion sets the standard for not only worship, moral and personal conduct, but topics that would normally be addressed by secular law, such as crime, the economy, and politics, are controlled by the same religious standards. The New England colonies are referred to as the "Bible Commonwealths" because they used scriptures in regulating the lives of the colonists, even going as far as citing Scripture, especially the Old Testament, as authority for many criminal statutes. Items such as idolatry, witchcraft, blasphemy, murder, poisoning and infidelity were addressed as law and Scripture was used to back-up punishment for infractions of the law.

The idea that the religious fervor of their previous century ancestors had abated by the eighteenth century is a myth. According the Library of Congress, “between 1700 and 1740, an estimated 75 to 80 percent of the population attended churches” and by the time of the Great Awakening in the 1730s and 1740s Protestant denominations such as Presbyterian, Baptist and Methodists began a rapid rise. By the 19th century the Anglicans, Quakers and Congregationalists were nothing more than a footnote of the eighteenth century and even the Deists such as Thomas Jefferson and John Adams found their beliefs were nothing more than a “minority in a minority.”

The argument that religion played no part in the foundations of the United States is a debate that raged as fierce then as it does in the modern day. However, there are considerable examples of how religion was indeed at the forefront of thought when the country was tackling the issues of independence and future government. As Professor Emeritus of History at New York University Dr. Patricia U. Bonomi observed, "by turning colonial resistance into a righteous cause and by crying the message to all ranks in all parts of the colonies, ministers did the work of secular radicalism and did it better." In 1778, Joseph Galloway, a Pennsylvania Assembly speaker and friend of Benjamin Franklin, left America for England because he disagreed with the colonists rebellion and believed that the revolution was “a religious quarrel, caused by Presbyterians and Congregationalists whose principles of religion and polity [were] equally averse to those of the established Church and Government." 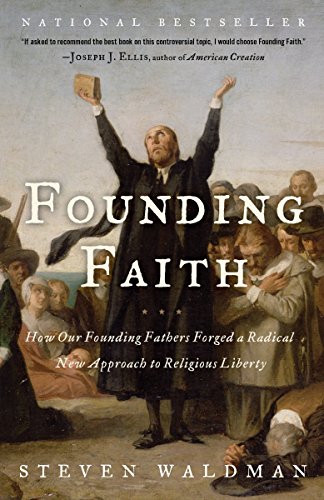 The Continental-Confederation Congress, in power from 1774 until 1789, provided another example of the importance of religion. The members were deeply religious, and while not directly addressed within the Articles of Confederation, the fact that there was no objection from the citizens on the matter of religion provides an example of how the incorporation of religion was appropriate. This Congress appointed chaplains for itself and the military; it sponsored the publication of a Christian bible; granted public land to bring Christianity to the Indians and at least twice a year for the duration of the war a National Day of Thanksgiving of “humiliation, fasting, and prayer” were sanctioned by these men. Benjamin Franklin and Thomas Jefferson both were tasked with coming up with a seal for the new country and both, being very theologically liberal, provided biblical images and stories (Franklin used the parting of the Red Sea and Jefferson used the Israelites in the Wilderness) for this important endeavor. Moral standards were the foundation to which all the Founding Fathers were committed. Ralph Ketcham stated that, “to them all, the Ten Commandments, the Sermon on the Mount, and the twelfth chapter of Romans were canonical.” Professor of Religion at Goucher College, Ann W. Duncan notes that,

In forming and perpetuating this new nation, the importance of not only religion itself, but specifically of the Christian faith, is crucial. Regardless of one’s disposition in regards to religion and the founding of America, it is undeniable that the presence of Christian language, symbolism and history molded not only the framers of America’s most important documents as well as the leaders that would come. Ultimately, religion was the staple that held this country and its leaders together. Scholar Michael Novak relates three main principles that can attest to this idea.

First is that “freedom is not doing what you want to do; freedom is doing what, after reflection, you know what you ought to do.” Second is to have “reflection and choice, you need people with enough virtue to have command of their passions.” Thirdly, he refers to George Washington’s idea that without religion, people would not have virtue or good moral habits.

Summed up, in the Jewish and Christian mode of thinking, it means that religion is not just some distant, repetitive and stale law; it is a relationship with a person. Condensed you get three principles based on no republic without liberty; no liberty without virtue; no virtue without religion.