Dolphins fascinates many people; their intelligence and friendliness makes them endearing to humans. Warm-blooded, dolphins are mammals that are found in almost every part of the world. Among the various species, the Bottlenose dolphin is the most widely distributed. They like shallow waters and can be found around continental shelves. Some dolphins such as the Boto live in large river system. It is believed that the ancestors of dolphins were actually land animals, since they still retain certain land features such as they breathe in air, and have remnants of their hind legs.

How clever are dolphins ?

The ratio of the brain size to an animal’s body is a very simple method of analyzing its intelligence. Big brains in proportion to bodies imply greater intelligence. This ratio in a dolphin is half of that a human. If we exclude the weight of dolphins’ fatty blubber, this ratio is closer to human’s.

Gene tests have shown that dolphins are related to the hippotamus.

Dolphins are believed to evolve from mammals that once lived on land. One such terrestrial ancestor of dolphins is known as the Pakicetus. It resembled the appearance of a wolf today. Some of the Pakicetus remains have been discovered in Pakistan.

The early dolphins evolved and became fully aquatic around thirty-eight million years ago. Two examples of such aquatic ancestors of dolphins are Basilosaurus and Dorudon. They looked very similar to today’s dolphins and whales, but they did not have the ‘melon organ’ that enables today’s dolphins to make sounds. They also have smaller brains, liked to live alone and disliked socializing like today’s dolphins.

Today, dolphins still retain some of the land-based animal features such as breathing in air, possess traces of hind legs and unique composition of spines that suggests that their ancestors ran on land and did not live in water.

They produce high-frequency clicks to find their location or determine how far they are from objects in front of them. This method is also known as echolocation or biosonar. It is the ability to use echoes to locate object, where sonar waves are emitted, reflected off by object and bounced back to them as an echo. The time taken for the sound to travel from the animal to the object and back again will determine the distance between the animal and object. Echolocation also helps to determine the size of the animal.

Bats and whales also use echolocation to locate object or find their way.

Clicks emitted by dolphins for echolocation are among the loudest sounds made by any animal in the sea.

Despite living in seawater, dolphin doesn’t drink seawater. It is too salty for them. Dolphins get their water from the food they eat. When fat is burnt in their bodies, it releases the water needed by dolphins.

What do dolphins eat ?

Dolphin’s diet usually consists of fish, shrimp and squid. The amount of food needed depends on their prey size. Adult Bottlenose dolphins eat as much as 4 to 5 per cent of their body weight daily. Their stomachs have different compartments to aid digestion. To take in the food with as little seawater as possible, their throats have very strong sphincter muscle to squeeze the seawater out before swallowing their food.

Dolphins like to eat fish such as herring, cod, sardines and mackerel.

A dolphin can jump as high as 4.9m (16.1 ft) from water. Jumping high into the air and then falling on their backs or sides is known as breaching.

Dolphins love to play and are often seen chasing each other.

Dolphins are playful creatures. They like to leap and jump out of water, performing acrobatics. This behaviour is called breaching. Many scientists are fascinated by dolphins’ breaching behaviour. Some believe that dolphins jump out of water to view prey from above the water, and to look for signs such as feeding birds, which help to locate their prey. This behaviour can also be a form of communication, a sign to other dolphins to join in the hunt, showing which direction they are heading. Another possible reason for dolphins to breach is to dislodge parasites from their skin. Or perhaps they leap, jump and spin simply for fun!

They are also seen riding on waves created by boats or ships, a habit developed probably from riding on swells create by whales or swimming alongside their mothers as calves. They are also seen playing and tossing seaweeds, carrying objects, mock fighting and chasing another dolphin. They chase other creatures such as turtles or sea birds for fun as well.

Dolphins can be used for psychiatric treatment of people suffering from depression and helpful in therapy of autistic and brain damaged individuals. Such programs are known as Dolphin Assisted Therapy or DAT. A study conducted in 2005 has shown that about 30 people suffering from mild to moderate depression had positive effect on their mood when having contact with dolphins. 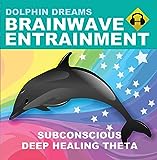 Wolphins are a hybrid, born of the False Killer Whale and Bottlenose dolphin. Many hybrids are infertile; they cannot reproduce. Wolphins are very rare in the wild. So far, only two wolphins exist in captivity in the world, and they are both housed at Sea Life Park in Hawaii. They are a pair of mother and daughter. Hybrids between different species of dolphin have been spotted in the wild waters of Hawaii as well, such as the Bottlenose-Atlantic Spotted dolphin and Wolphin, but very rare.