Accreditation Is A Critical Consideration When Choosing Any College

Things have changed with the popularity of the Internet and with educational methods and even with the delivery of course work. I don't expect things will ever go back to the way they once were, when people who wanted to earn a college degree had mostly one option ~ choose the college, move near the college and live either on the campus or in the geographic area. Then, students would attend courses on the college campus.

Courses were taught by instructors who were either professional educators or influential members of businesses and governmental agencies. Today, even when students take courses online towards their college degree, they often have the same instructors that teach these campus based classes. This is a good thing!

Some other wonderful advancements are that a college degree earned online through distance education today is usually the same degree that is earned when one attends classes in the traditional way, on the college campus. There is usually nothing printed on the degree to differentiate it and to show that it was earned through an online education format.

It Kept Coming Back To Accreditation

Probably the most important thing I learned through my research is that the main thing you want to look for when choosing a college degree program online is accreditation. This includes accreditation of the school itself and also of its individual programs, and in some cases, individual colleges (i.e. a School of Business, School of Education, School of Engineering or a School of Nursing).

The degree earned also tends to hold more prestige when it comes from a school with an excellent reputation and one that retains its accreditation status. Normally, schools are evaluated for accreditation every ten years to make sure they are upholding their high academic standards. 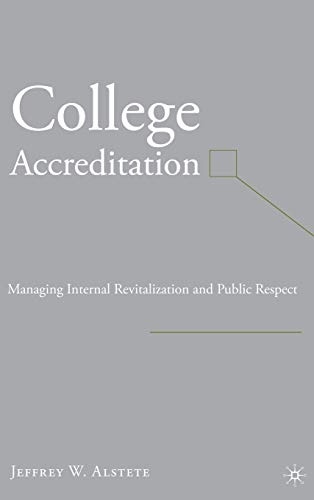 The United States today has six agencies responsible for accrediting institutions of higher learning and their individual colleges and academic programs. When an agency is responsible for schools within a certain geographic area, it is called regional accreditation.

Here are the accreditation's to look for, depending on where the specific University or College is located:

Western Association of Schools and Colleges-
Also called WASC, this accrediting institution covers California, Hawaii and some international locations as well. This association was founded in 1962.

The Secrets of Picking a College (and Getting In!) (Professors' Guide)
Buy Now

Individual College Accreditation To Look For

School of Engineering-
ABET - Accreditation Board For Engineering and Technology

School of Nursing-
ACEN- Accreditation Commission for Education in Nursing

Finding a school or its programs that are accredited individually assure that they meet high standards of excellence in areas like their academic offerings and available help for students with useful services like library services and counseling.

Students who find an accredited program or college quickly discover that each school and program will be similar in scope and range and that the academics covered will be similar.

Schools Can Also Be Nationally Accredited

Council For Higher Education-
Also abbreviated to CHEA, this is a non-government agency and one that is normally asked to accredit programs for certain career paths and sometimes for faith-based schools and universities.

What Does All This Mean?

Students may tend to think that accreditation doesn't really matter, when in reality, it does. A future employer might have trouble accepting a student's degree from an institution that is not accredited.

This might mean that the student could have trouble finding a job, while at the same time, they are in debt for their college degree. Students don't ever want to find themselves in this position. Smart students search for schools and programs, especially in cases when they are considering online education, that are accredited by a reputable accrediting agency.

Another thing to think about is if the student might ever find themselves in the situation of needing to transfer to another university or college. Credits earned from a non-accredited institution may not even be transferred to the new school. This leaves the student with hard earned college credits that are essentially almost worthless in the world of college education. All that time spent studying to earn credits can essentially be nullified. Courses may need to be taken over again through an accredited school.

Hopefully, this has helped you to see the importance of accreditation when it comes to earning a college degree. This holds true whether the degree is earned in a traditional way, on a college campus, or through the newest way of earning a degree, entirely or partially online.

Many times, students can earn their degree either 100 percent online, or in a hybrid way, which is a blending of online course work with in-classroom study. Many schools today are going to the 100 percent online format to make it easier for students who are busy with work and other commitments to earn their degree from the comfort and convenience of any place they have an Internet connection!

Find A Reputable College or University

One of the most important things a student can do is to earn their degree from a reputable college or university. Many times, if educational institutions are reputable, information about the accreditation of the school itself or its programs will be prominently displayed on the website. The school is generally proud of the fact that it is accredited, and will let students know within a short time of visiting their website whether the school or its programs or individual colleges are accredited.

This becomes especially important for online students. Be careful to watch for any school that uses words like "approved by" instead of accredited by and other official sounding phrases that are not real accreditation. Other words that are sometimes used are registered, affiliated with, licensed by and recognized by. Stick with schools that have a valid accreditation and if you're not sure, contact the accrediting agency. They will normally have lists of schools that really do have valid accreditation.

If you are going back to school for your college degree or furthering your education, good for you! I hope this has helped to jump-start your search. Getting a degree is exciting and can lead to job advancement! Just be sure to carefully choose the school, whether it is a traditional college or university, or an online program backed by a university.