Charcoal is a black residue that form is what you burn something that has a lot of carbon in it think coal or coconut shells, activated charcoal is just charcoal that's been treated with a special gas during the production process when it's burnt at a very high temperature, the chemical reactions from the fire rearrange the carbon atoms to form a ton of tiny pores as a result. Activated carbons are not only manufactured from coconut shell but hard/soft wood, lignite coal, bituminous coal, olive pits, petroleum pitch, bamboo, coconut husk, willow peat, coir, Palm shells and various carbonaceous materials are used.

Now, Let us talk about how Activated carbon is developed or manufactured.

Steam Activation
This process is also known as Physical activation where hot gases are used to develop source material in to activated carbon. This is generally done by thermal decomposition at a temperature ranging between 600 -1000°C in an inert atmosphere. In short this thermal decomposition is also called Pyrolysis and whole process is called Carbonization. Tars, hydrocarbons as well as few gases generated during the process are separated by drying & then heating.
In order to reactivate carbonized particles by exposing them to an activating agent, such as steam at high temperature, Activation/Oxidation is usually done in the temperature range of 600-1200°C where carbonized material is exposed to oxidizing atmospheres, Steam burns off decomposition products from the carbonization phase to develop a porous. Longer exposure times result in larger pores.

At a relatively low temperature of 400°C to 500°C carbonization process is usually done, where raw material is soaked into suitable chemical solution such as phosphoric acid (H3PO4), potassium hydroxide (KOH), Nitric acid (HNO3) or salts Zinc chloride (ZnCl2), Magnesium chloride (MgCl2), (Ferric chloride) FeCl3, Aluminum chloride (AlCl3), and Potassium sulphate (K2S) to loosen the cellulose. Next comes Carbonization process where soaked & then dried, raw material is kept in furnace at desired temperature forcing the material to open up and have more microscopic pores, Solubilized cellulose, which, at elevated temperatures, separates, as a highly dispersed amorphous carbon, which forms a porous structure in the carbonaceous adsorbent. Later this raw material or mixture is cooled to ambient temperature and washed subsequently with HCL Solution & distilled water to wash out chemicals until pH value is measure is reached to 6.5.

GAC can be divided in two:
a) Unshaped or broken: which have merely been crushed and screened. Due to the fact that the size of cubes formed from PAC and binders is normally very large, these cubes must be crushed and milled again, as a result of which they acquire a broken shape.

b) Shaped GAC: which has been processed to have a specific shape such as that of a cylinder. These cylinders are obtained either by pelletisation or by extrusion of powder carbon and binders & are suitable for toxic gas purification, waste gas treatment, industrial and domestic water purification treatment.

Powdered Activated Carbon (PAC): PAC typically has a diameter of less than 0.1 mm and has an apparent density range between 23 and 46 lb/ft3. About 50% of the total production of activated carbons is PAC. Typical applications for PAC are industrial and municipal waste water treatments, sugar de-colorization, beverage, medicine, oil and other industries in brewing, electroplating, mercury and dioxin removal from a flue gas stream.

Activated Carbon fabrics and felts: Manufactured from different synthetic cloths like rayon, Kevlar, etc. by both physical and chemical activation. Activated Carbon fabrics and felts meet the engineering requirements of specific applications such as adsorption, gas separation, catalyst supports, etc. activated carbons can be manufactured in the form of fabric or felt in order to benefit from their low pressure drop, high contact efficiency, flexibility and high adsorption capacity.

This is brief about how an activated carbon is produced and what raw materials are used & its types. Although there are 100 types of activated carbon out there and used in plethora of filtration & purification processes. Generally, it’s not something you'd want in your toothpaste or your food, right, but charcoal or rather activated charcoal has been rising in popularity as a trendy addition to everything from Ice Cream to a detoxifier. Some claims are that, it can whiten teeth & cure hangovers. Around 2014 activated charcoal began to gain popularity as cleansing ingredient for food things like charcoal Lemonade's & pizza crusts. You might have seen photos of black ice cream that dominated your Instagram feed, those were usually activated charcoal, but there haven't been many scientific studies on the long-term health effects of charcoal. I believe it makes you constipated and worse as might give you a mild nutrient deficiency. The toothpaste Trend really began to kick off & some toothpaste brands claim that activated charcoal can whiten teeth and detox your mouth, but in a study tested charcoal against a generic brand of whitening toothpaste and it concluded that there was potential for the charcoal residue to embed into tissue leaving a gray coloration. The abrasive nature of the charcoal was also found to potentially lead to gum recession over time. You may have noticed a growing number of facial products containing activated charcoal that claim they can just scan that we find pores but But like food and toothpaste there is the whole lot of research that backs this up. My idea of charcoal is impregnated into fabrics like towels or bed sheets at the end of the day. If you want to eat trendy charcoal Foods, it's not that big of a deal just don't make them part of your daily diet as for charcoal toothpaste and face masks. There's still a bit of research to be done about just how effective they are, charcoal and fuse fabrics are a great investment if you're looking to reduce dust mites and odors. So, Shop smartly out there. Thanks 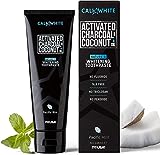