One of the most cherished attractions to visit in Chattanooga is the Tennessee Aquarium. This thrilling, exciting place, is filled with adventure that captivates children and adults of all ages. With over 10,000 animals to view, including birds, butterflies, frogs, alligators, turtles and river otters, it takes a few hours to stroll through and see everything.

The aquarium is located downtown on the riverfront. Combination tickets are available to Ocean Journey, River Journey and the Butterfly Garden, as well as River Gorge Explorer and IMAX 3D. Two hour long catamaran cruises board from the Chattanooga Riverboat Pier.

My favorite section of the Tennessee Aquarium is the Ocean Journey portion. It fascinates me with it's vast infinite-like number of bizarre and strange looking sea creatures.

In the deep waters of the ocean lurk the real life sea monsters we definitely wouldn't want to encounter without a safe barrier of protection between us. Some of these fishes have faces so devilish, nightmarish and ferocious their photos elicit a squeamish cringe from most all of us at first glance. For instance, the ogrefish, the viperfish, the extremely poisonous and spider like blue ring octopus, and the lizardfish, not to mention the humongous blue whales of the South Caribbean Sea or the sharptooth lemon sharks of the Indo-Pacific. These dangerous requiem sharks hunt amid the rocky ridges of north-east Australia's Great Barrier Reef and along the other reefs of the Coral Sea Islands.

Explore the aquarium and you'll discover a sampling of the ocean's most amazing and awe inspiring animals. A few of my favorites are the seahorses, sea dragons and red lionfishes.

Weedy Sea Dragons (see photo at right) and Leafy Sea Dragons are cute and graceful Phyllopteryx taeniolatus. They are a member of the Syngnathidae family and are pipefish and seahorse-like, but differ from seahorses because they don't have gripping tails. They can be found among sea grasses, along sandy underwater areas, in the coral reefs of western and southern Australia, and down around Tasmania. The Leafy Sea Dragon has leaf like projections growing from it's body in the form and fashion of a floating greenish yellow plant. Sea dragons grow in size up to a length of about eighteen inches or 46cm. The male sea dragon carries the eggs that the female puts on his tail (up to 300) where they are fertilized and incubate on the underside of his tail for a duration of approximately two months. When the eggs begin to hatch, it continues for a period of about a week. The baby sea dragons range in size from about 2.5 to 3.5cm. Only a small percentage of them live to reach maturity.

One of the most unusual and beautiful of all the salt-water fish are the lionfish (Pterois) with their red, white and black stripes and venomous needle-like spiny dorsal fins. They are a member of the Scorpaenidae family. This is a fish you don't want to touch since although seldom fatal, the effects of getting stuck by the poisonous spines is known to cause severe pain and swelling in the wound area which may be accompanied by other symptoms such as dizziness, nausea, headache, and in some cases breathing difficulties. A very prolific fish, the females can produce as many as two million eggs during a season. Since they can easily adapt to both warm or cold waters, they are now found to be travelling and invading reefs in areas where previously they hadn't been seen before. They primarily live in the tropical waters of the Indian Ocean.

Another marine lover's treasure is the sea star. Although it is widely known as the starfish, it isn't really a fish, but is a hard shelled spiny skinned invertebrate actually classified as an echinoderm. This intriguing small sea animal usually has five arms, although there are some varieties with more. One amazing characteristic of starfish is that they are able to grow back lost body parts. It's common in many of the (approximately 2000) species for a severed arm to regenerate into another whole and complete sea star. Slow movers, they crawl along the bottom surfaces of the ocean and attach to it's surfaces and to their prey by pushing and holding water in hundreds of ventricular suction tubes on their undersides. They are carnivores and feed on other echinoderms, corals, mullusks, oysters, sponges, and on small fish. These astonishing creatures vary widely from one type to another in color, texture and attributes. Their names often reflect their appearance (i.e., the red-knobbed starfish, brittle stars, crown of thorn starfish, spotted seastar, sunflower star, and feather star.)

During one of our aquarium visits, the octopus ventured out of his hiding place for a few moments, just long enough for a quick snap shot of his bottom suction-side pressed to the glass, before he scurried away again and vanished from our view. Although the photo isn't the best, it was my first and only opportunity, so far, to photograph an octopus, so I'm proud to have a picture none-the-less. These cephalopod mollusc are invertebrates (having no back bone). They are excellent disguise artists and like chameleons change colors to camouflage and blend in with their surroundings. Predators often swim right by without noticing them. When startled or under attack, they defensively squirt an ink substance (sepia) in an attempt to darken the waters, and confuse the enemy, while they try to escape. Octopuses are extremely fast swimmers. With eight arms held behind to propel them along, they are able to jet away with great speed. Since they are very limber and flexible, they can squeeze through small openings and large cracks in rock crevices with ease. And if by chance they happen to be caught, unlike most other seafarers, they have the uncanny ability to break off their captured limb. A severed appendage is no big deal as another eventually grows to replace it. All octopuses are poisonous. They catch prey with their tenacious arms, bring it up to their mouths at center point to bite it at which time venom within their saliva renders the victim helpless and begins the digestive process. These remarkable souls are very intelligent. In captivity they've been known to jauntily play games that amuse lucky aquarium visitors fortunate enough to see the show.

This is only a wee taste of what you'll find waiting for you at Chattanooga's Tennessee Aquarium. Come see for yourselves, bring your family, and don't forget your camera! 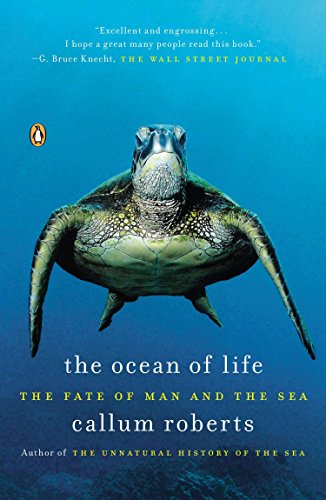 The Ocean of Life: The Fate of Man and the Sea
Buy Now