Ambivalent Conquests and Colonization: Mayans and Spaniards in Yucatan from 1517 to 1570

Changes in the Spaniard and Mayan Society

Conquest and colonization are not events. They are processes that have great effects on the conquerors and the victims. Most often only the story of the victor is said. The purpose of measuring the degree of change in the conquerors and victims is obvious, to understand the culture of the conquered society after the conquest and tell the story of the losers. I will explore the extent of change the Spanish and Mayan societies underwent as enumerated by Inga Clendennin inAmbivalent Conquests. The prism used to gauge the extent of change or the lack of it is not the transformation of daily patterns or humdrums, but the social relationships between the Mayans and the Spanish in the light of their worldviews. With the exception of the Franciscan Friars, neither the Spanish colonists, or the Mayans lords and commoners changed drastically to discard their old behaviors and relationships.

An examination of the Spanish worldview is essential to understand why conquest and colonization did not change them to a great extent. Spanish society was rooted firmly in the Catholic doctrine which is revealed truth. Revealed truths were uncontested because they came by revelation from a higher authority. Obeying the higher authority meant believing the truth and never compromising it for anything else. This religious zeal was phased in to Spanish lifestyle, and it led to the development of an outlook that was marked with absolute certainty in the correctness of their lifestyles. This was partially because the Catholic Church controlled every facet of European life from cradle to grave. Therefore, because of the rigid Catholic view, Spanish society was inflexible to change. Spanish society and the lifestyle can be compared to a structure hewn out of solid rock. It is impossible to alter the rigid structure of solid rock; yet because of its sheer size and weight, it dominates and crushes anything it lands on. Spanish society, because of its ingrained notions steeped in Catholic worldview was like solid rock and would not accommodate any degree of change. Anything contrary or foreign to the established beliefs or lifestyle was going to be seen as outlandish and useless. When the Spanish conquered the Indians, it is obvious that they were not going to treat them as equals. They held nothing but contempt for the Indians because they were heathens did not practice the Spanish way of life. As indicated above, because of the degree of absolute certainty in their beliefs, they forced a whole lifestyle and society on a people who already had one developed. The rock structure of the Spanish society was dumped on the backs of Indians. Their relationship to the Indians was at best benevolent supremacy and at worst sheer contempt. They never came to accept indigenous practices as suitable for the Mayan people because for all of humanity only one way was correct good and that way was the Spanish way. So they did their best to dispose subjects’ lifestyle and superimpose their own.

Throughout conquest and colonization, the Spanish do not change because they interact on a limited basis with the Mayans. The first piece of evidence Clendinnen furnishes to show this is the Spaniard’s lack of interest to learn Mayan. Learning Mayan would have benefited them greatly, especially to organize the Indians and verbalize their concerns and practices. Learning Mayan could have facilitated a friendly cross cultural blend that could have benefited Spanish and Mayan societies. But the Spaniards were unwilling to compromise their superiority complex and instead forced the Indians to learn Spanish. However, it is not prudent to say that there was no interaction at all between the conquerors and conquered, but the dominating one way interaction enforced by the Spaniards made them stagnant in their own culture and brought no new changes in their worldview or towards one another. Clendinnen furnishes a second piece of evidence to illustrate the Spaniards unwillingness to interact with Indian society. She says the Spaniards were “ready to respect rank and toughness, especially when they could be made to serve Spanish interests” (Clendinnen 39). The Spaniards imposed their authority on top of the lords and did not bother for the daily interactions as long as the tribute was paid. There was a superficial layer of Spanishness imposed on the Indians to give the Spanish colonists an atmosphere of home, but in actuality the interactions that could have changed Spanish society were minimal. These practices of separation stemmed out of a superiority complex that was rooted in the Catholic world view described above. Thus with a xenophobic attitude, the Spanish colonists did not undergo any large degree of change because they strove to keep their former society intact by imposition of their culture and minimal dealings with the Indians.

The Franciscan Friars are the second group of Spaniards which underwent tremendous changes in their relationships with the Indians because of conquest and colonization. The Franciscan friars were noted for their humility, service, gentle leadership and patient endurance that stemmed from Christian doctrine. But they underwent great transformation and became objects of terror. Though they espoused the same Catholic worldview like the colonists, they were supposed to be the benevolent saviors and mediators for the Indians. Clendinnen furnishes the details of the numerous tortures they employed to elicit confessions from the Indians about idolatry. She says “more than 4,500 Indians were put to the torture during the three months of the inquisition . . .” (Clendinnen 76). They were responsible for the deaths and whole scale disruption of Indian society because of their misplaced zeal. They professed to be gentle fathers and promoters of salvation, but they changed to brute beasts. It is noteworthy to read Clendinnen’s description of the Friar’s brutality; she says “When, after sentence, Indian penitents were tied to the whipping post to suffer the prescribed number of lashes, it was reported that their bodies were already so torn from the preliminary interrogations that ‘there was no sound part on which they could be flogged’” (Clendinnen76). The friars changed beyond recognition and it was their advent that made life for the Indians more hellish than ever. The degree of change in their relationship towards the Indian from gentleness to brutality is appalling and great! The Franciscan Friars are an exception when measuring change in Spanish society. Their behavioral change on conquest and colonization was radical and even today many have a difficulty digesting their actions.

An assessment of the Mayan worldview and the structure of their society is required to understand why conquest and colonization did not change the Mayans. Mayan society can be compared to a spider’s web. The web is complex and very strong to bear the weight of the spider. The most notable aspect of the web is the flexibility combined with tenacity that prevents the spider from falling in winds and rain. Just like the spider web, Mayan society was flexible and strong enough to endure the wear and tear of indigenous conquests. The complex fabric of the society was by no means rigid, or imposing as the rock like structure of the Spanish, but its specialty was its ability to adapt various conditions. Mayan knowledge was not revealed knowledge in the Christian sense. It could accommodate more as time passed. The flexibility of the Mayan society is what enabled it to allow a Spanish superimposition. Though the rock façade was thrown at the Mayan web, and it endured a great deal of wear and tear, the society stood enough not to change radically in the fundamental relationships amongst themselves.

While colonization was in full progress, the Mayans made adaptations based on their cultural flexibility so that they could continue in their previous practices. The first piece of evidence Clendinnen furnishes is Mayan adaption of Christianity. She notes “a seventeenth- century cleric lamented the sullen unwillingness or incapacity of the Yucatan Maya to learn the basic doctrines of Christianity” but “the Maya lavished care on their village churches , keeping them filled with flowers and with the songs and hymns in their own tongue that they never tired of singing” (Clendinnen 191). The reason the Indians paid more attention to the Church surroundings rather than the doctrine was because in their pagan practices, it was the sanctity of the temple grounds that mattered the most. The mannerisms, the rituals and sacraments mattered more than the individuality of a god. When the new conquerors imposed their gods on the conquered society, the new deities were adored in a pre existing pattern. Similarly, when the Spaniards enforced Catholicism on the Indians, they just adopted a new god and his requirements as they did previously. This accommodation was common to the Maya and therefore no new radical changes occurred. The second piece of evidence Clendinnen gives to demonstrate the elasticity of the Mayan society is the relationship between the lords and commoners. Clendinnen states “ In Maya eyes, it was fitting that the sons of lords and only sons of lords should have access to the new knowledge, and discretionary control over its dissemination to commoners” (Clendinnen 172). The knowledge, which included Christian doctrine meant for all the Indians, was taught only to the sons of chiefs. This was the practice before the Spaniards came, and it continued showing the lack of change in Mayan hierarchy. Thus Clendinnen shows that conquest and colonization did not really alter Mayan society. While they had to endure the tortures and new setups that were foreign to them, they remarkably stayed the same by adapting and adopting from their conquerors.

It is remarkable to see that neither society changed during conquest and colonization. The Spanish society, studded in the sturdiness of the Catholic worldview did not budge in their dealings with the Indians. The Mayans, flexible like spider web stayed the same. It was a unique relationship that characterized these two societies. The apparent Spanishness on top, namely religion, customs and piety sufficed enough for the Spaniards to call it home. With the exception of the friars who sought to change others but themselves got transformed in to brutes, the basic structure of both societies remained the same. Overall, it can be said that this undesired mutual adjustment was better than permanent alterations. 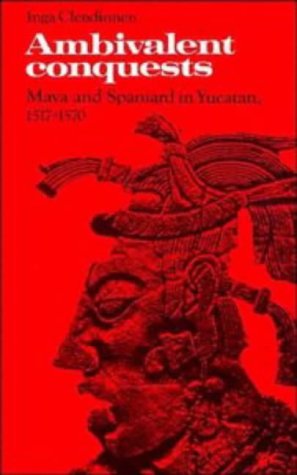 The Book for this analysis